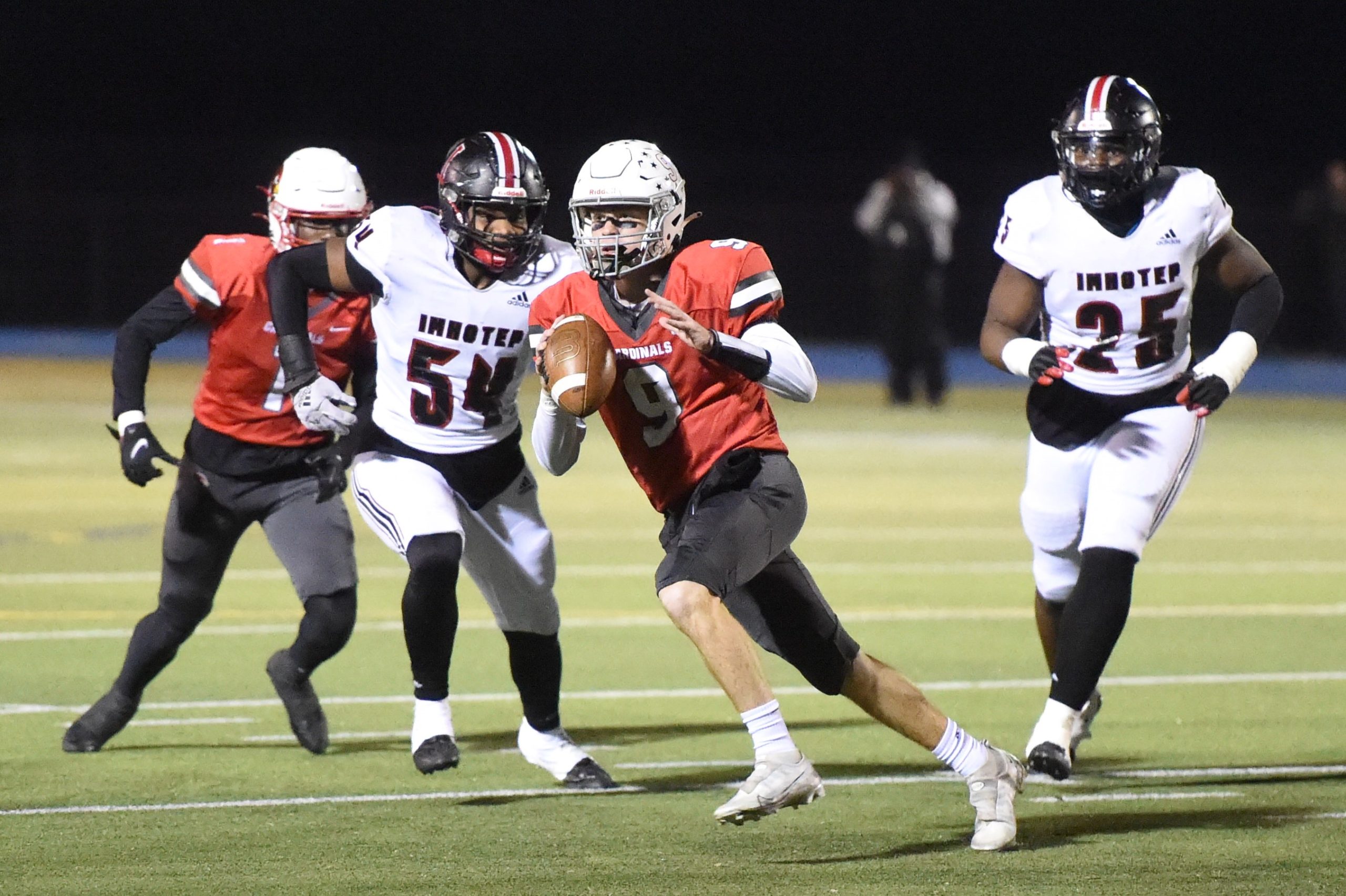 LOWER GWYNEDD >> All the way through to the heart-pumping final drive, Upper Dublin believed victory was still within its collective grasp.

“It speaks to everything we’ve done all year,” said quarterback Colin O’Sullivan. “All those guys are resilient. Adversity hit us and we just kept punching back.”

Upper Dublin climbed back from a 21-0 deficit to close to within 21-14 of Imhotep Friday night in the PIAA-5A State Semifinals. The Cardinals were marching towards a tying score in the final moments of the fourth quarter at chilly Wissahickon High, but Imhotep came up with one final stop.

Still, the way Upper Dublin battled back typified the character and determination of the District One Champs.

Upper Dublin’s Griffin Pensabene (8) and Bill Brightcliffe (62) share a moment after the Cardinals’ 21-14 loss to Imhotep Charter in the PIAA-5A semifinals on Friday, Dec. 2, 2022 at Wissahickon. (Mike Cabrey/MediaNews Group)

“(Imhotep) landed the last punch but it doesn’t define us as a team,” said O’Sullivan. “We’re still one of the best to ever do it here. I love all those guys.”

O’Sullivan and the Upper Dublin seniors experienced many happy Friday nights the past four seasons.

This year was something special, as the Cards finished 14-1, a mark shared by the 2015 squad quarterbacked my Ryan Stover, who went on to play at Towson.

O’Sullivan, like Ryan, couldn’t wait to put on the Cardinal uniform.

“Colin was around my program since he was (knee high),” said Upper Dublin coach Bret Stover, Ryan’s dad. “It’s like doing it again with your son. I kind of had that same feeling and I know exactly where he’s at emotionally right now.

“I’m very proud of the way we competed tonight. (When it was) 21-0, we could have gone away. But we didn’t. We played a good football team tonight. And we didn’t get blown out – we had a chance to win the game in the fourth quarter.”

And O’Sullivan was a big reason.

Said Stover: “Colin made plays. He made plays all year for us. He was able to find the right guy. He got (senior) Starling (Reaves) down the middle and I think that kind of jump-started us. Everybody was like, ‘maybe we’re not done.’ And I think the kids believed in that. That’s what really kinda sparked us.”

“We were moving the ball in the first half,” said O’Sullivan. “We just didn’t cash in on some opportunities. We came out in the second half, spread them out, and were able to move the ball down the field.”

Defenses struggled all season when trying to stop O’Sullivan and the Cardinal attack.

Friday was no different.

Along with their abilities, the Cardinals also possessed an unwavering confidence and a high degree of mental toughness.

“They’re gonna be so hard to replace,” Stover said of this group of seniors. “There’s two-, three-, and four-year starters out here, which is unusual for us – because of COVID (in 2020), we had to start some freshmen. It’s just fun to watch the progression of the kids in the program. Now it’s the next level that’s gotta step in and take over.

Added the coach: “It’s hard to say goodbye when you’re a senior and it’s your last snap. But I’m proud of what we did, proud of the accomplishments of this team. They’ll be remembered as one of the best for sure.”

Over the last four years, O’Sullivan and the Cardinals made memories.

“It was a heck of a season. I love those guys. And to play every week with them meant the world to me,” he said. “It’s the hardest-working group I’ve ever seen. There are so many of us that are gonna do great things in college. We’ve all worked so hard at it. It’s such a good group of guys, you love to be around them. That was the best part, just coming out and hanging out with them. Those guys are my best friends. I loved every second of it.”