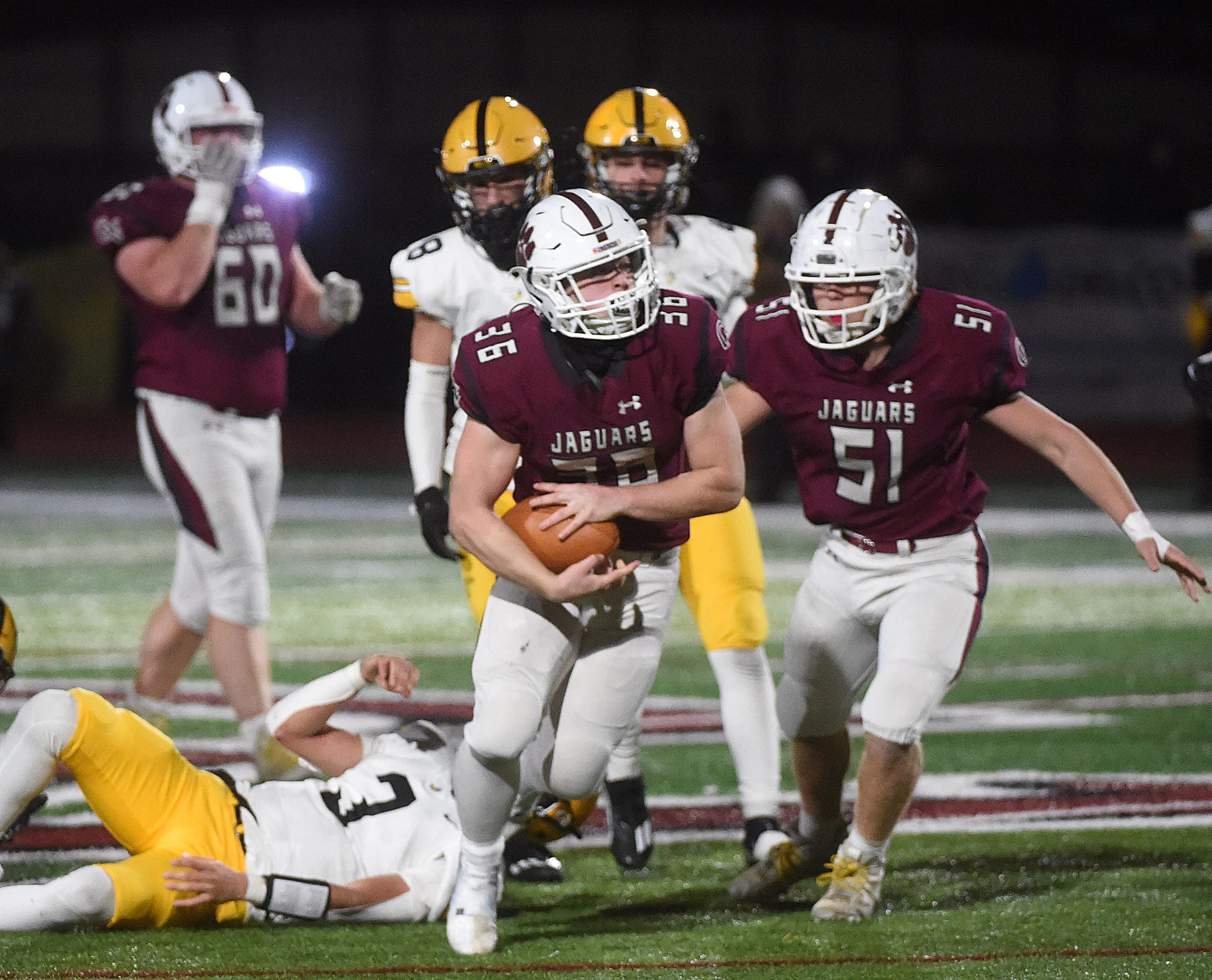 Garnet Valley’s Jason Bernard is one of the toughest players in Delaware County to tackle.

Everybody calls him “Bus,” which is a fitting nickname for the 5-7, 190-pound senior running back, because all he seems to do run over defenders.

“In third grade, my BYC (Brandywine Youth Club) coach gave me that nickname,” Bernard said. “I actually was a lineman. In practice one time, he let me do a running back drill and thought I looked like Jerome (‘The Bus’) Bettis. The next year I turned into a running back.”

Bernard personifies the “Prove It” slogan that Garnet Valley seniors adopted for this season. Following a season-ending foot injury his junior year, Bernard had to show that he could return stronger and better than before. He’s been nothing short of amazing for the undefeated Jags, rushing for 992 yards and 15 touchdowns.

“He had lisfranc surgery in the middle of last season, so the entire offseason he worked his tail off to get back to where he was,” GV coach Eric Van Wyk said. “The thing that has been so impressive is that he truly has gotten better every week. He’s a hard-nosed kid that wants the ball in those tough situations. He embodies everything we want in a physical football player.”

Bernard and the District 1 champion Jaguars (13-0) will play mighty St. Joseph’s Prep (10-1) in the PIAA Class 6A semifinals Saturday at Northeast High School at 1. This marks the second year in a row the Jags and Hawks have clashed in the state semifinals. Prep rolled to a 49-13 victory at Ridley High last November, but fell to Mt. Lebanon in the state final, 35-17. The Hawks had won PIAA Class 6A titles in 2018, 2019 and 2020. Overall they are six-time state champions.

“Obviously, we know what they did to us last year,” Van Wyk said. “A lot of our guys who were juniors and sophomores, I’m not sure if they got into the game or not, but they got to see their speed, physicality and toughness. I think it allowed us to realize what we need to prepare for this year. You know, they are the real deal and there’s nothing more you can say about that. But I do think that it helped getting the idea of their team speed and understanding what they can do.”

Prep is essentially a team of Division I-level talent. Junior quarterback Semaj Jones lit up the Jaguars in last year’s game, and has passed for 2,092 yards with 25 touchdowns this fall. He’s also run for more than 600 yards with 12 TDs.

Garnet Valley’s only loss since the start of the 2020 campaign came against St. Joe’s Prep. The Jags will lean on the leadership of quarterback Matt Mesaros and strong offensive line led by tackles Matt Wiesendanger and Vincent Manna. Mesaros has passed for 1,259 yards, 18 TDs and no interceptions while running for 747 yards and four TDs.

The winner advances to the PIAA championship where it will take on the winner of the game between District 6 champion State College and District 3 titlist Harrisburg on Saturday, Dec. 10 at Cumberland Valley High School (7 p.m.).