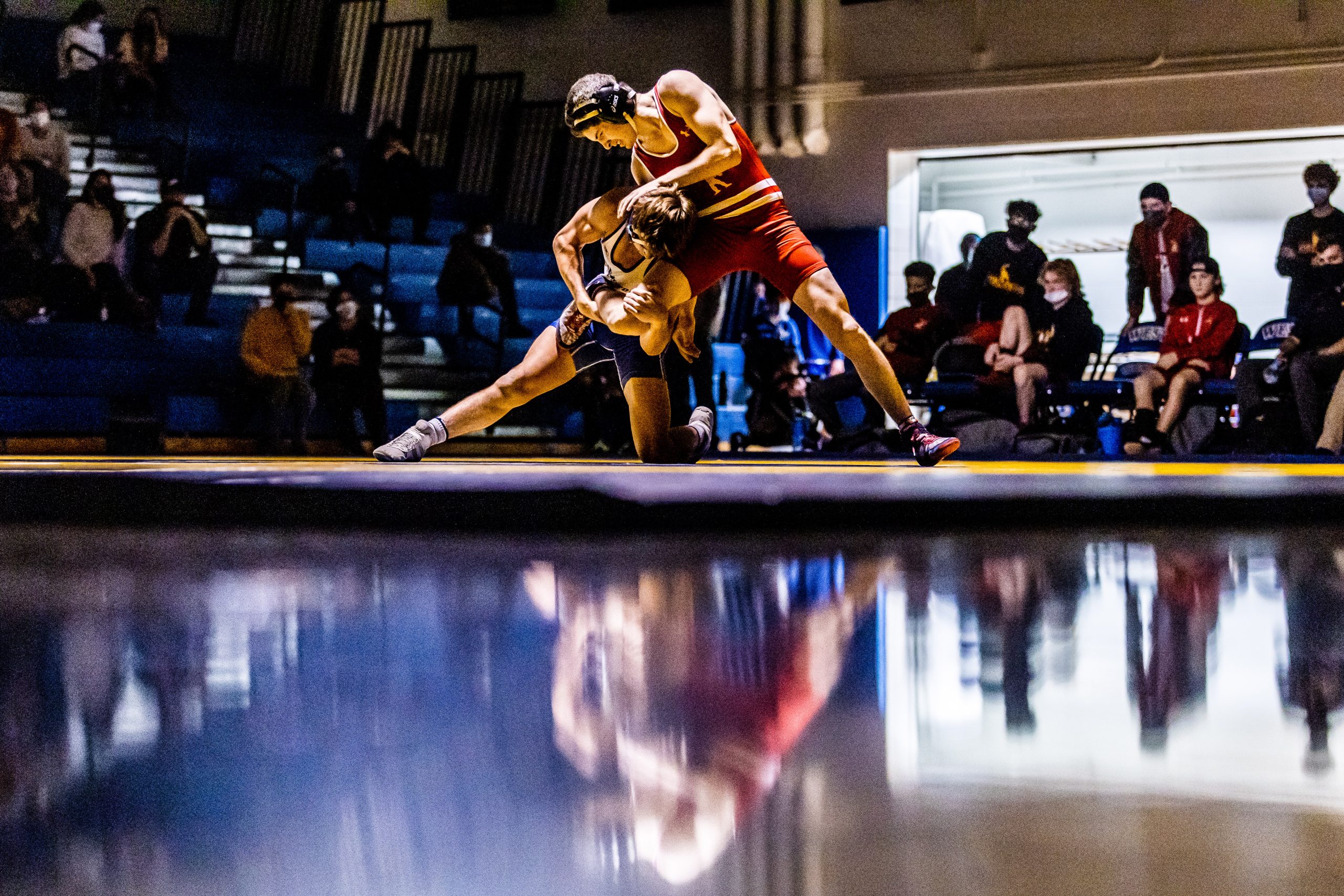 Outlook: Avon Grove returns most of its lineup for Reiter’s first season. Ford won a match at regionals as a sophomore and moves up a weight. Landon is a home run hitter, with 39 of his 42 non-forfeit wins coming by fall. He’ll hope to catch lightning in a bottle in his final campaign. McCullin was .500 last year and was a win away from regionals. Freshman Noah Parsons (107 pounds) should help in the lightweights.

Outlook: Coatesville brings back all but two starters from last season, meaning it should be more competitive in the National Division. Szczesniuk was a sterling freshman, going 34-8 and finishing sixth in the region, one win shy of a trip to states. Evan Seagreaves won 29 matches as a junior, and Jason Seagreaves and McGuire were 18-bout winners. Jack Weldon (160) and Jacob Ruttman (152) add some experience in the middle of the lineup.

Outlook: East loses just two starters from a year ago, but is still without any star power. Loraw is the most-seasoned grappler with 59 career wins, but after reaching states as a freshman, he’s hoping to end a two-year absence at regionals. Loraw is one of three 20-match winners from a year ago, along with Warnock and Abouraya. Sophomores Valen Piff (114) and Tommy Grizzanti (189) showed some grit last winter and will be tested by a strenuous first month.

Outlook: Once again, the Whippets have the toughest non-league schedule, with the Cumberland Valley, Beast of the East and MyHouse Trojan Wars tournaments in December. Hale reached states last season and Barry, Bernhard and Chase Sigle were regional qualifiers. Brayden Sigle is an impact freshman and the Whippets will be tough in the first half of its lineup. With Troy Mack not wrestling this season, Hale is the most reliable upper weight, and the others in the bottom half of the lineup will have to step up if West wants to knock off Henderson.

Outlook: The Vikings have had a state qualifier the last two seasons and four out of the last five, and Parnis is their most recent to compete in Hershey. Parnis won 32 matches as a junior and is 32 wins away from 100 for his career. Cooper, Hussein and McFarlane had winning records last year and won at least 15 matches apiece. East will get some good resistance for Parnis by going to the Solanco Mule Classic and MyHouse Trojan Wars tournaments in December, and hope some of the less-experienced wrestlers grow, as well.

Outlook: Henderson has graduated a ton of talent over the past few years, but is also one of the hardest-working teams in the area in the offseason. Of the 380 wins by Warriors last season, 244 were done by seniors. The Warriors qualified for the PIAA Duals for the first time, ever, last season, thanks in large part to the development of the lesser-known names. Cortese is the last-remaining star, after becoming Henderson’s first regional champ last winter since 2005. Schalleur and Keevil were 20-plus match winners a year ago and Beighley is counting on Overton and Jackson McMonagle (152), among others, to step into bigger roles.

Outlook: Gee takes over for his alma mater and will continue to build a base to grow from. He’ll have a couple 22-win wrestlers from a year ago, Cruz and Matthews, to lead the way as seniors. Matthews was sixth at sectionals as a junior and Cruz hasn’t competed in the postseason since his freshman year. Son won 15 bouts and he and Jose Ramirez (215) add senior experience. Gee hopes for solid contributions from Mark Soderland (133) and Gabe Ertle (152), as well.

Outlook: The Blue Demons had a stepping stone season a year ago, competing in their first District 1 Duals and finishing eight in the Class 3A Southeast Regional tournament, thanks to six qualifiers. Barlow, Pardo and Shindle were three-quarters of a program-high in state qualifiers. Kennett only lost one starter to graduation, though senior Josh Kochersperger was likely lost for this season with an injury. Barlow is 21 wins away from 100 for his career. Pardo was a win shy of a state medal as a sophomore, and he and Shindle make for one of the top upper-weight combos in District 1. Adding to a very solid lineup, already, Blake Boyer (127) is one of the more-heralded freshmen to join Kennett, and Zack Jaffe (121) is another tough freshman. Getting Joey Wuchter (133) back from injury is another big addition.

Outlook: The Hornets are hoping for a little better luck with health after injuries derailed promising campaigns. McKinney was lost for the season after an injury during the Ches-Mont Championships and McMillan got hurt in the regional semifinals and defaulted to sixth-place. That pair should be in the running to end their careers in Hershey. From a dual meet standpoint, Oxford lost just three starters, so should remain competitive in the league. The Schaible twins add some spunk and Canaday, Nate Vance (152) and Dillon Williams (215) give the Hornets senior experience.

Outlook: Peoples takes over as the head man, stepping up from his role as assistant. Tryon made regionals in his first postseason appearance, but suffered a non-wrestling injury and will miss the majority of the season. Haines peaked at the right time, finishing his freshman year sixth in the region. Coursey won 21 matches and O’Leary and Jacob Julier added 16. The Longhorns will have opportunities to grow with a duals-heavy schedule.

Outlook: The Knights aren’t shying away from competition, adding the Solanco Mule Classic and Parkland Duals to their non-league slate. Seaman was a regional finalist and state qualifier as a junior, but will likely miss the first few weeks of the season. He is one of six Knights with double-digit wins a year ago. Pizzi and Emmonds finished fifth at sectionals. Gavin Seaman (160) and Andrew Brown (215) bring some experience in the back half of the lineup, and White believes Brody Woodbridge (121) can make an impact as a freshman.

Outlook: The good news for the Griffins is they have 15 freshmen on the team. The bad news is, there are only two seniors, zero juniors and five sophomores, as well. Onyinah has 10 career wins and finished fourth in the Class 2A District 1/12 tournament last year. Adarsh Rana is the only other Griffin with a varsity win. Erdmann is expected to be a leader on a team that will be mostly learning wrestling from scratch.

Outlook: Baker inherits a solid squad who should find itself in the mix in the upper half of the Central League. Allred claimed his first trip to states with a fifth-place finish at regionals. McLelland, Beltrante and Warkentine joined Allred at regionals, and all three won 28 or more bouts. Conestoga did not lose a ton to graduation, and Matt Boye is another senior returning with a winning record last season. Sophomore Charlie Mucklow (121) was a 15-match winner and will be joined by freshman Steven Wiechecki (127) to strengthen the lower weights.

Outlook: Carter, a former Downingtown East wrestler, is trying to build a program from scratch. From one wrestler in 2020, to six last year, the Tide have a dozen wrestlers in the third year of existence. Carter doubles as coach for Archbishop Carroll, as the teams practice together due to the low numbers, and at Carrolls facility while Devon Prep’s field house is being built. Watson went 7-7 as a junior and has the most experience on the team with a 9-10 varsity record. Carter is also excited about the prospects of freshman, Jason Kleiner (114).

Outlook: Malvern lost an insane amount of firepower in the back half of its lineup, but are stacked with talent in the lightweights and have a lot of experience in the middle weights while the upper weights try to establish themselves. Barnhart is committed to wrestle at University of Penn and Link is headed to Army. Mutarelli is ranked No. 10 in the country according to MatScouts and Consiglio is No. 13. Malvern as a team is No. 8. O’Neill, SP O’Donnell (145), Nathan Rickards (152) and Reed Fullmer (160) placed at Prep Nationals, last season. Coatesville native, Leo Pezone, won the 106-pound spot, and Duncan Christensen (170) is ready for a full season after missing most of his freshman campaign.

Outlook: Much like Church Farm, losing the 2020-21 season to COVID set the program back, with many inexperienced wrestlers in the room. Tookes, Swarthout and Henderson qualified for prep nationals and will help set the tone. Benbow and Olojo had winning records and Westtown will also get Patrick McKinley (145) and Ian McKinley (160) back from injuries. Luke Holgate (145) adds some experience, as well.

For the second time in three seasons, there have been changes to the PIAA weight classes. In 2020, one of the upper weights was removed and weights were shifted into 13 weight classes. This year, the first six weight classes bumped up a pound to 107, 114, 121, 127, 133 and 139. From 145-285 pounds, the final seven classes remain the same as the previous two seasons.

The Ches-Mont American Division may have the most power, team-wise, this winter. Sun Valley has won the last two non-COVID season championships and hasn’t lost a division meet since 2019. The Vanguards are primed to compete deep into the District 1 Duals with nine returning starters and two key sophomore transfers. Brandon Carr (152) returns to his home district after placing second in Delaware’s state tournament at Archmere Academy. Hunter Delaney (133) also transferred from West Chester Henderson. Kennett figures to be Sun Valley’s top competition, having lost just one senior, but have already been bitten by the injury bug with Josh Kochersperger likely lost for the season.

In the Ches-Mont National, West Chester Henderson has won four straight division titles, so the road to the top goes through the Warriors. Henderson graduated a big senior class and Downingtown West is on the rise, but few coaches around the area get the amount of collective improvement from a roster in the offseason that Rob Beighley does. West lost four to graduation, and heavyweight Troy Mack is not wrestling, but the Whippets have a good mix of talent and determination in their lineup.

After what has felt like a ton of loss to graduation in recent years, the Chester County welcomes a handful of strong freshmen to the mix. Kennett’s Bryce Boyer (127) and Zack Jaffe (121) are two names to watch, along with Downingtown West’s Brayden Sigle (107) and Conestoga’s Steven Wiechecki (127).