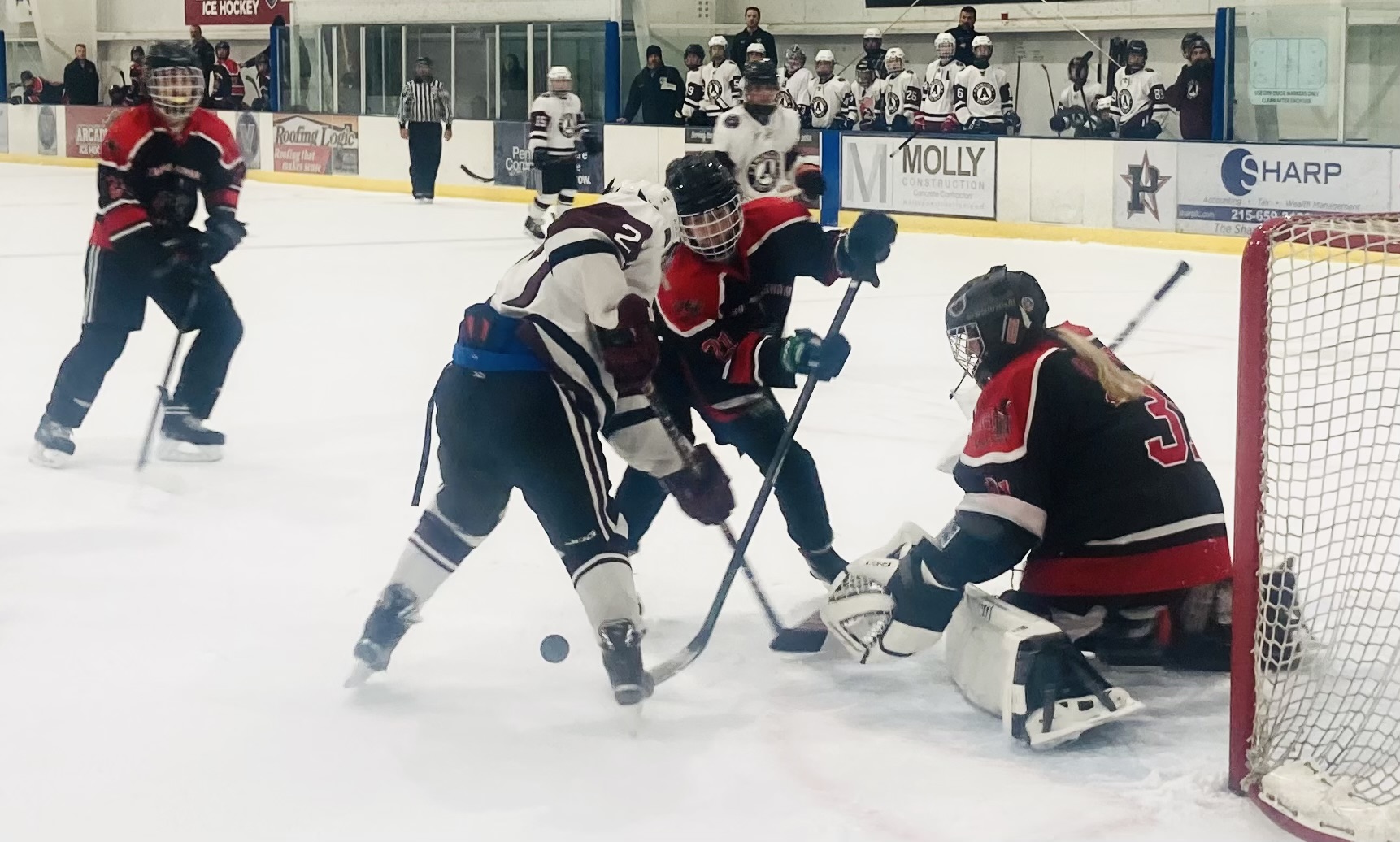 COLMAR — Abington is all in again, and the Ghosts’ rugged pursuit of an American Conference title defense this season holds special significance to captain Ian Heydt.

“Right now, we’re pushing for another championship,” Heydt said of Abington’s 4-0 start, made possible in part by Wednesday night’s 8-3 victory over Hatboro-Horsham-William Tennent. “And we wanna go against some of the AA teams that are gonna come up this month and see how well we can against them and go for another undefeated season.”

Heydt, who missed the second half of last season due to injuries suffered in a car accident, is savoring his opportunity to be back on the ice.

“To me, it really does feel good because I didn’t play at the end of last year so to be able to come in, work with the team and get some wins, it feels really good,” the forward said. “I was waiting for this season. I’ve really been looking forward to it.”

Abington coach Ken Brzozowski talks to his team during its battle with Hatboro-Horsham-William Tennent. (Kev Hunter/MediaNews)

Heydt made his presence felt in many ways Wednesday night at Hatfield Ice.

He scored a goal, assisted on three others, and helped Abington continue its progression through the season’s opening stretch.

“We still gotta work as a team, moving the puck a lot more, but overall we’re working to get ahead of the better teams we’re gonna play in December,” he said. “We’re still working through some injuries but we’re getting along, playing and doing what’s gotta be done.”

It’s a tightly-woven chemistry that continues to work for the Ghosts.

Abington jumped out to a 3-1 lead early Wednesday night and scored the final four goals of the contest.

Abington goalie Devin Brown skates out onto the ice at the start of the second period against Horsham-Tennent. Brown made 12 saves in the victory. (Kev Hunter/MediaNews Group)

“We’re progressing,” Ghosts coach Ken Brzozowski said. “It’s still early in the season. For us, we had a big layoff – we haven’t played in a couple weeks. It was nice to get back on the ice and we have some tough games coming up. We’re looking to raise our level of intensity on the ice.”

The Ghosts put on a lot of pressure, earning a 41-15 advantage in shots. Goalie Charolette Reeves made 33 saves for Horsham-Tennent.

“She played amazing,” Brzozowski said. “We talked about trying to get the puck down a little bit lower, get some rebounds, but yeah she definitely made some great saves.”

The Ghosts are looking for more consistency throughout.

Said Brzozowski: “We have some work to do. We’re looking to continue to translate what we’re doing in practice into games and I saw a couple areas that we didn’t execute as well as we do in practice.”

Quinn Morena gave Horsham-Tennent a 1-0 lead and went on to record a hat trick. His third tally brought his squad within 4-3 but it was all Abington from there.