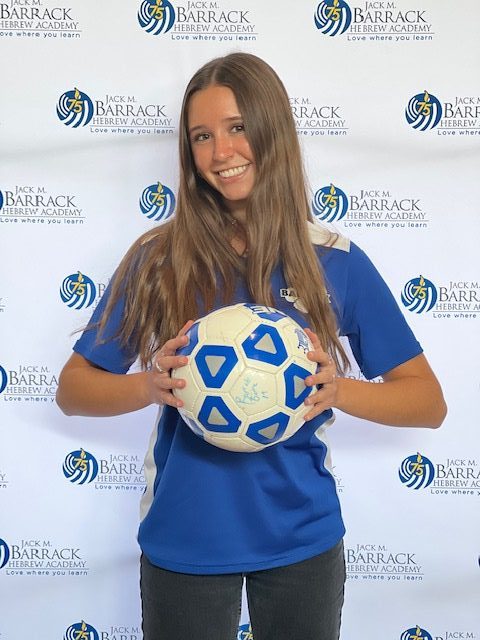 When the Barrack Hebrew Academy girls’ soccer team captured the Penn Jersey Athletic Association championship this fall, one of the main reasons was the play and leadership of senior midfielder and captain Eden Singer.

“Eden is the dictionary definition of a leader,” said Barrack Hebrew girls’ soccer head coach Keith Bradburd. “She is extremely tough both physically and mentally as a player. She was able to play through multiple games where she was identified as our top player and was played very physically, always fighting through without complaint or retaliation. She was always more concerned with the team than she was with her own statistics.”

In the Penn Jersey Athletic Association championship game against Perkiomen School, Singer scored a goal and dished out an assist in the Cougars’ victory. Barrack trailed at halftime 1-0 but early in the second half exploded for four consecutive goals.

“That scoring burst instantly raised the energy of the game and the state of mind of the team,” said Singer. “The best part about this game was that every single member of our team was completely fired up and played an important role in securing our win.”

The Barrack Hebrew squad was a young one, consisting of many underclassmen, so Singer’s leadership, on and off the field, proved vital.

“As a team captain, I fed off the energy of the other seniors on the team and we all tried to promote camaraderie, positivity and good sportsmanship amongst the team,” said Singer.

Singer, who has played soccer since first grade, has been primarily a center midfielder, but has played a little at forward as well. She has played for Lower Merion Soccer Club most of her life, and recently switched to a Steel United club team this year.

Last summer, Singer played soccer for the USA team in the Maccabiah Games in Israel.

“The Maccabiah Games were was an incredible experience to play soccer and connect with athletes from all over the world,” said Singer. “While I have many memorable instances from the Games, two in particular stand out to me.

“The first was the Olympic-like opening ceremonies, in which every delegation/country walked out into a stadium with thousands of people, including President Joe Biden. It was such a cool experience to walk out with the entire US delegation and serve as a representative of the United States.

“Second, the gold medal game against Israel was a hard fought and very memorable game. We had previously beat the Israeli National team 2-1 the week before, but knew that we would have to fight hard for gold. We ended up losing the game 1-0, but it was a very competitive game and there was a friendly camaraderie with the Israeli team that created a positive feeling among the team despite the loss.”

The Maccabiah Games was Singer’s fourth trip to Israel. The first time she was there was with her family, then in 8th grade, she spent two weeks in Israel with her school grade, traveling around and learning about the culture.

“The most memorable time I spent in Israel was in 11th grade when I had the opportunity to live in Israel for three months with my entire grade in an experiential learning program, which was an incredible experience,” said Singer.

“Every week we traveled to a different area in Israel to visit various historical sites that we had learned about in the classroom. This was such an effective and meaningful way to learn. One of our most memorable trips was a four day hike called ‘sea to sea’ where we hiked from the Mediterranean Sea to the Sea of Galilee, which was an amazing experience together with all of my friends.”

Singer’s favorite academic course is AP Calculus. While she is not yet sure what she wants to major in at college, she is considering being on a pre-med track.

Pre-game preparation: “I like to eat well/have big lunches before games, and then on the bus to games, or on the field warming up, I like to listen to music with my teammates to elevate my energy and get ready to play.”

Person I most admire, and why: “My two sisters, Jessie and Noa.”

(To be selected as a Main Line Athlete of the Week, a student-athlete must first be nominated by his or her coach.)