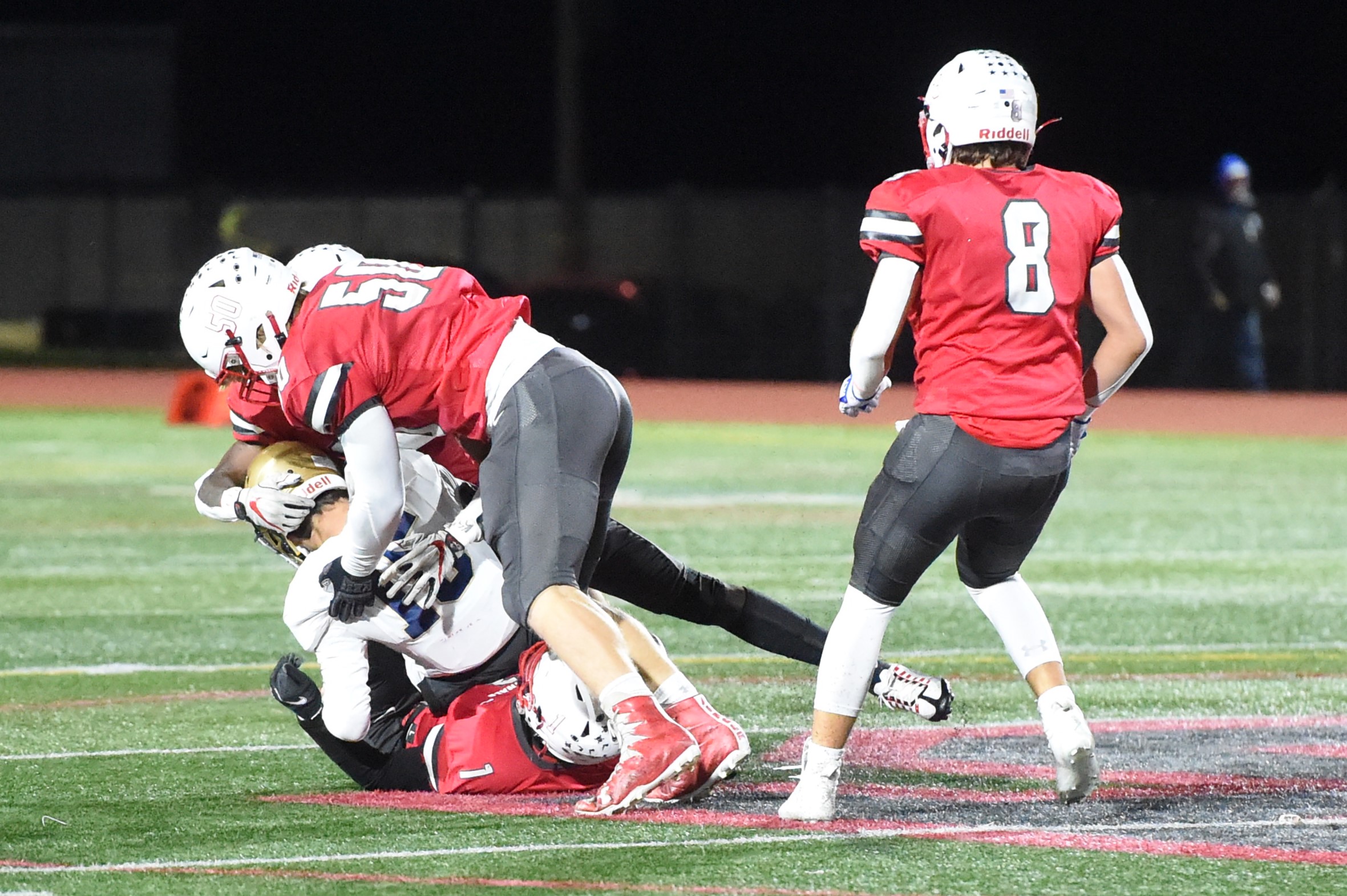 UPPER DUBLIN >> At 8:44 in the second quarter, the tower lights at Upper Dublin’s stadium went off, plunging the District 1-5A final into darkness.

After a delay, the field was once again illuminated but perhaps the outage was in honor of the Cardinals defense, which from the start of the District 1-5A tournament has been lights out.

Friday night, it continued the stellar postseason performance by allowing only a late touchdown to West Chester Rustin as UD claimed the district crown with a 21-7 victory.

“I definitely feel like going into playoffs we stepped it up a bit,” Cardinals senior lineman Riley Hackett said. “Everyone’s at a hundred – all the gears are clicking, it’s great. To compare to earlier in the season, everyone’s still learning, just getting used to it. We definitely kicked it up a little bit.”

Upper Dublin’s defense had played at a high-quality level in its regular season, allowing opponents an average of just 9.3 points per game. The Cardinals gave up more than 14 points just once – against North Penn in a 32-28 win Sept. 9 – and posted a pair of shutouts in its opening 10 contests.

The Cardinals began districts with back-to-back 35-0 blankings of Academy Park and Great Valley in advancing to face Plymouth Whitemarsh in the semifinals. The Colonials – who topped UD in overtime in last year’s district quarters – had averaged 46.0 points in their nine previous games but could not crack the Cards’ D and Upper Dublin rolled to a 30-0 victory.

“They believe in each other, they trust us,” UD coach Bret Stover said. “In the beginning of the year they weren’t sure – we had new faces out there who aren’t sure, you know ‘These guys, what are these guys telling me?’ And then once they saw that what we’re telling them, we’re putting you in spots to be successful – you do your job and the guy next to you does his job it all works together as a unit.”

The Cardinals came close to not allowing a point during its run to the district championship – its third 5A crown in five seasons and fourth district title since 2015 – but Rustin quarterback David McClain reached the end zone on a two-yard run with 5:15 left in the fourth.

“It’s not like it’s a lot of points but it just hurt our pride a little bit,” said Hackett of UD losing the shutout streak.”

Upper Dublin heads into a state semifinal matchup against either Imhotep Charter or Whitehall having given up a total of 100 points in 14 games – an average of 7.1 points per game.

“It’s just the comradery,” Hackett said. “Everyone’s together. You’ll see us after plays, everyone’s picking each other up high fiving all the time. It’s just that comradery just builds trust in each other.”

Rustin found some success through the air on the game’s opening series as a pair of 19-yard completions had the Golden Knights on the UD 36. But the Cardinals stiffened up and a sack on 3rd-and-17 forced a punt.

UD proceeded to take a 7-0 lead on the following series as QB Colin O’Sullivan connected with Starling Reaves for a 33-yard touchdown at 4:25 in the first quarter.

“At first it was a little bit iffy,” said Upper Dublin’s DJ Cerisier, a senior defensive back/wide receiver. “But then we got the hang of it.”

The Cardinals held Rustin to just one more completion as the Golden Knights finished with 54 yards through the air. Rustin ran for 160 yards on 33 carries in post 214 offensive yards but were held scoreless in the first half, trailing 14-0 at the break before a one-yard TD run by UD’s Nyfise McIntyre made it a three-possession game in the third.

“It was just keeping our contain and filling our gaps and just going with the guards and that’s really it,” Hackett said. “Everyone was doing their assignment, we were able to go up, come out on top.”

With Rustin throwing just about everything it could at UD, the Cards’ defensive unit also produced a pair of fumble recoveries while senior lineman Kyree Butler made his presence known on special teams as well, blocking a punt in the second quarter that set up Upper Dublin’s second touchdown.

“They had some big plays, trick plays – I think we saw just about every trick play you can see in the book,” Stover said. “We had a fake punt, we had an onside kick, we had a hook-and-ladder attempt right before halftime which might have gone had their guy held onto it. (Defensive coordinator Dave) Sowers does a great job with our defense, our kids are so well prepared.”