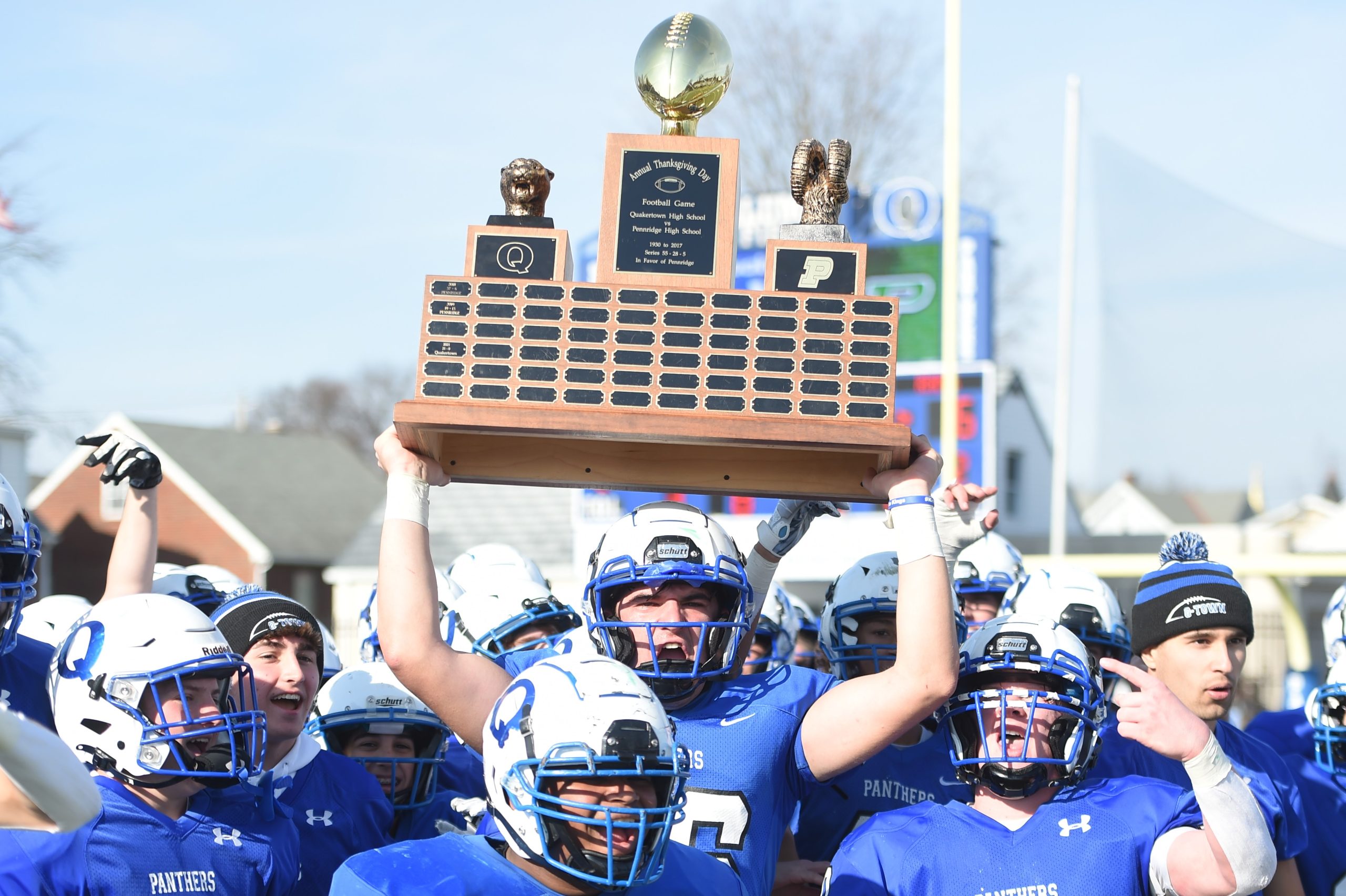 Quakertown celebrates with the Thanksgiving Day game trophy after its 22-6 victory over Pennridge on Thursday, Nov. 24, 2022 at Alumni Field.

QUAKERTOWN >> A season of adversity for the Quakertown football team ended in triumph and turkey.

The Panthers came up with an inspired effort on Thanksgiving Day, winning 22-6 over rival Pennridge.

“At one point, it felt like we were against the whole entire world,” senior lineman Vincent Pellegrini said of this season, during which the Panthers faced an uphill climb due to roster turnover and injury (in fact, six major surgeries). “But now everybody came together and it was just one big, happy family. It was the best way I could finish off this season.”

Pellegrini, the only Panther starter out there Thursday who played in the 2021 contest, helped power a robust Quakertown running attack. The Panthers built a 22-0 lead by the third quarter and claimed the 93rd Thanksgiving Day battle between the two (Quakertown won 21-0 a season ago).

“Last year, we had that big season (going 13-1 and reaching the district semis), but I think this game was my favorite,” Pellegrini said. “The atmosphere – packed stands, it was amazing. Being on the field, I was just smiling the whole game. It was awesome.”

Quakertown’s Aiden Whiteley (44) is lifted up in the air in celebration of his second-quarter touchdown against Pennridge during their game on Thursday, Nov. 24, 2022. (Mike Cabrey/MediaNews Group)

The Panthers drove to the end zone on each of their first two series and led 14-0 at the break on a crisp, sunny morning at packed Alumni Field.

“Our offensive line did a tremendous job today,” said coach George Banas, who guided the Panthers back to the postseason in 2022. “The running backs really ran hard today. A couple guys came out of their shell and bright things are on the horizon for sure with what we have back there.

“I’m just so proud of this team. We’ve been through so much this year. This one means a lot. Last year was phenomenal. But this win today might have meant more. We had so many kids go down (this year). We were able to win the line of scrimmage, and that was huge. We were locked in today more so than any.”

Quakertown’s Adam Streahle makes an interception against Pennridge during the second quarter of their game on Thursday, Nov. 24, 2022. (Mike Cabrey/MediaNews Group)

After coming up with a defensive stop at its own 30, Quakertown moved the ball 70 yards in eight plays to go up 6-0.

Gavin Carroll (105 yds) and Brett Hileman (50 yds) picked up key chunks on the ground and quarterback Vincent Micucci – off of play action – hit Hileman for a 45-yard pickup.

Aiden Whiteley crashed in from the one and the Panthers were ahead.

Quakertown (6-6) forced another punt and the offense went back to work.

Pennridge’s Brennan Fisher (22) looks to evade the tackle attempt of Quakertown’s Vincent Micucci (8) on a carry during their game on Thursday, Nov. 24, 2022. (Mike Cabrey/MediaNews Group)

Pellegrini and company pried open holes and Carroll and Hileman burst through, with Whiteley capping off the drive with another one-yard plunge, building the Panther lead to 12-0. Whiteley also powered in for two, making it a 14-0 Quakertown advantage at the intermission.

“We were harping all week at practice that if we could just come out hot, start the game hot, and continue to do what we do, we could win this game,” said Pellegrini, who wants to play next year – he has visited Ithaca University. “We had these two weeks off and we were just going at it, trying to have fun and carry the momentum.

“Injuries happen and it’s tough, but it’s next man up and that’s why we practice.”

Quakertown’s Adam Streahle (16) gets a foot down near the sideline for a catch against Pennridge during their game on Thursday, Nov. 24, 2022. (Mike Cabrey/MediaNews Group)

An offensive line that includes Pellegrini, Brian Hendrzak, Kendre Lopez, Andrew Gansz and Nick Laudenberger began to shove this one into the win column: the Panthers scored on their opening series of the second half, with Micucci pushing in from the one and Whiteley carrying it over the goal line on the two-point try.

The Rams answered with a 75-yard march to cut it to 22-6. Quarterback Noah Keating scored on a sneak for the touchdown. Brennan Fisher had 99 yards rushing in the contest for the Rams (2-9).

Pennridge had another sustained drive in the fourth quarter but the Panthers got a turnover on downs and ran out the clock.

“Our kids had the fight: guys like Tyler Wetzel and Hunter Burdick, guys that have carried the team all year, did everything they could to pick us up and get us over that hill,” Rams coach Chuck Burgy said. “But we had a couple mistakes here and there – it felt like the way things have gone this season. A stalled drive or an inopportune penalty…

“Coach Banas always has them ready for this one. I thought he did a great job with them this year, with what was termed a rebuilding year with a young team. He made something out of it and made a run. I’m not surprised with how they came out: emotionally charged-up and they got after it.”

Quakertown runs its way to win over rival Pennridge
Football: Sun Valley’s .500 finish is reason to give thanks