Football: Sun Valley’s .500 finish is reason to give thanks 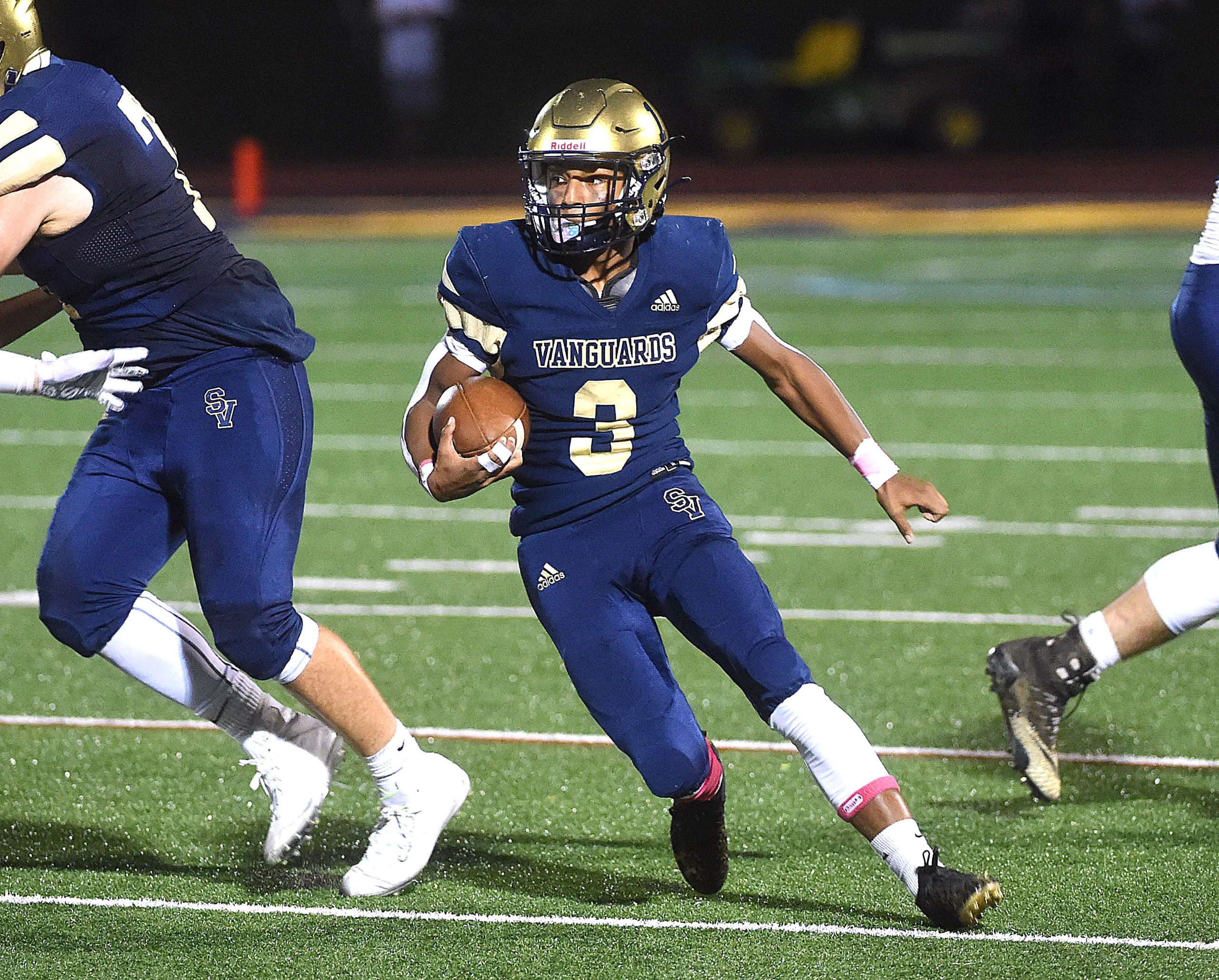 ASTON — The tradition continued at Dr. Wally Field for the Sun Valley senior football players and cheerleaders and their parents Thursday afternoon.

After the Vanguards put the finishing touches on a 26-7 Turkey Bowl victory over Chichester, those seniors assembled in one end zone while their parents gathered on the opposite side of the field. When the final walk across the field, with the accompanying playing of “Forever Young” had ended, the celebration began.

Sun Valley (6-6) was celebrating an end to a three-game losing streak to Chichester as well as the completion of its first non-losing season since 2016.

Ernie Ellis, in his second season as head coach at his alma mater, reflected not on the three times that teams he played for had beaten Chi but on the 2-0 loss SV suffered his senior season.

He pointed to the end zone out of which a football rolled, resulting in a safety and the only points of the game. It could have been on his mind, but he didn’t mention the eight games Sun Valley lost to conclude the 2021 season. Most of all, he expressed joy that his senior players could walk off the field winners following their last football game.

“You’ve set a standard,” he told his players. “Now in January we get back in the weight room and work harder than ever to be ready to make our mark next season.”

Junior Noah Griffin (118 yards rushing on 18 carries) had a scoring run in each half, senior quarterback Steve Eskridge (115 yards passing, 56 rushing) threw a touchdown pass to sophomore Josh Yanonis in the second quarter, and senior Todd Harper ran 13 yards for a TD to close the scoring with 1:04 to play.

“All week we’ve been talking about how this was for the seniors,” Griffin said. “We talked at halftime about how (Chichester) was going to put up a fight so we had to knuckle down for the second half. They were still in the game, and we didn’t think they should have been.

“To know that I got 100 yards rushing in this game means a lot, but the biggest thing is getting the win. And when I got that second touchdown (a 25-yard run late in the third quarter), I knew we had it.”

Chichester (1-10), which closed the season on a nine-game losing streak, took the opening kickoff and marched from its 22 to the Sun Valley 12 before losing a fumble. Griffin scored at the end of a 64-yard Sun Valley drive, all on the ground, on the second snap of the second quarter.

When the Vanguards got the ball back two minutes later, it took just two plays return to the end zone. Eskridge scrambled, avoided the Chichester rush and found Yanonis alone behind the Eagles’ defense on a 59-yard scoring play.

“The pressure was coming from the right so I rolled to the left,” Eskridge said. “I just got the ball to (Yanonis) and he did the rest. The biggest thing for us today was that our offensive line (John-Paul Griswold, Sean Curley, Travis Powell, Matt Howard, Nolan Horton, Aiden Cook) made it possible for us to do what we did.

“This was the game of the year for us, the one all of us wanted to be in.”

Chichester got its touchdown on a 29-yard completion from Dan Kelly to Derrick Robertson two minutes after Eskridge’s TD toss.

In the second half, the Sun Valley defense limited the Eagles to one first down, recovered a fumble and intercepted Kelly twice.

“We knew they would want to try to get outside,” SV middle linebacker Ryan Creegan, who forced a pair of Chi fumbles, said. “It was all about doing the small things – and doing them right.