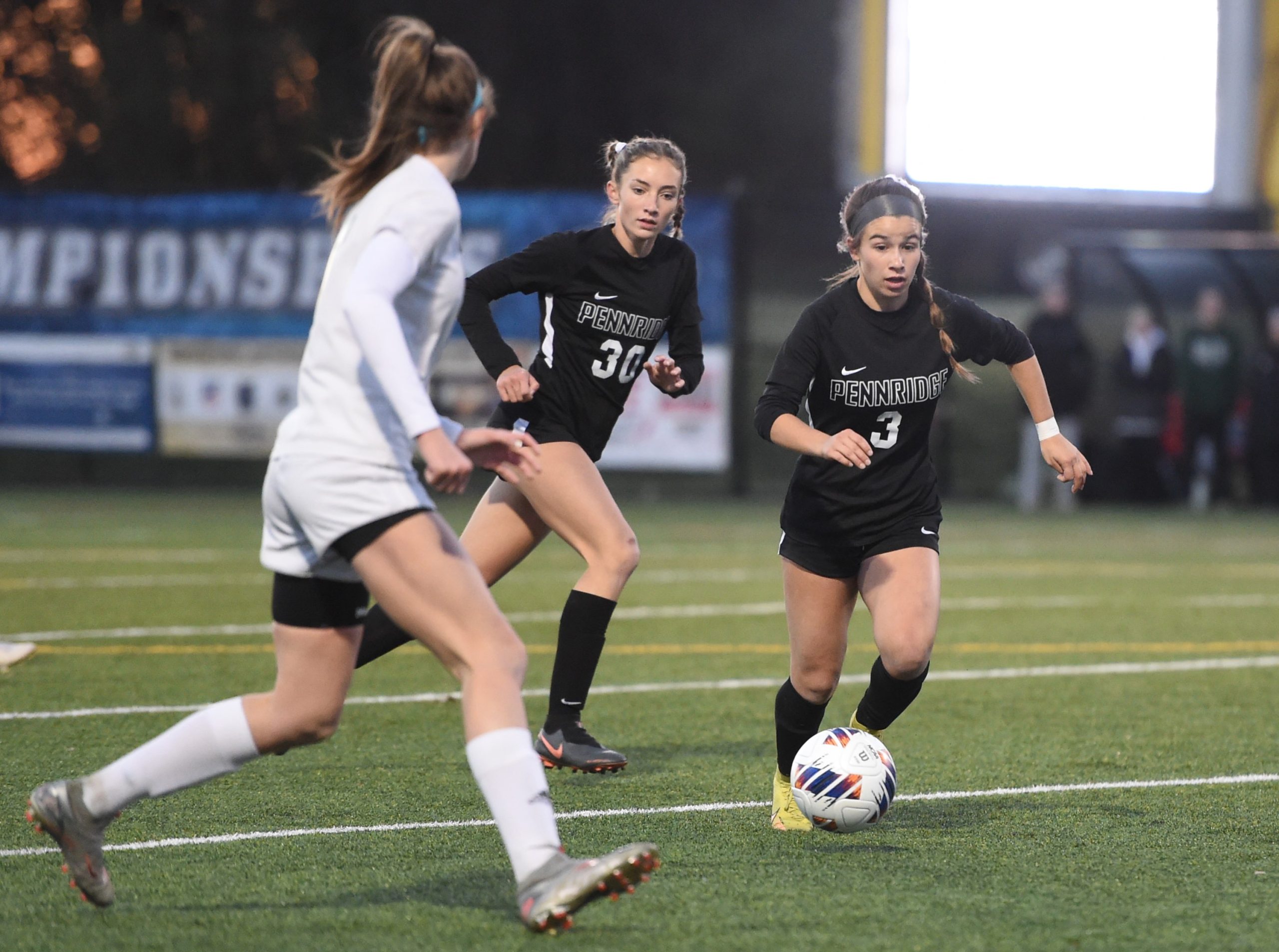 MECHANICSBURG >> Joey Tomlinson, Pennridge girls soccer’s lone senior, was concise in describing Saturday night for the Rams, which ended just short of a state title after falling 2-1 to Central Dauphin in the PIAA-4A final.

“We had a lot of chances and I think we played great,” she said. “Sometimes it just doesn’t work out and that’s OK.”

Tomlinson, a Robert Morris commit, and the rest of the Pennridge attack did its best to put pressure on the CD defense but after Hailey Primwhere’s scored to tie the contest at 15:12 in the first half, the Rams could not find a way to collect the go-ahead tally.

And after holding off Pennridge, Central Dauphin caught a break – a deflected shot falling into the path of Kayden Williams, who sent her shot in with just 4:23 remaining in regulation at Eagle View Middle School.

“I think that we possessed the ball well,” Tomlinson said. “We tried to get in behind, they were giving us some space to dribble but we just couldn’t get the shots in the back of the net.” After falling to Central Bucks West in penalty kicks following a scoreless draw in the District 1 quarterfinals, Pennridge’s offense got back on track. The Rams scored 19 goals in the next five postseason games – tallying at least two in each of the matches, including seven against Central in the state first round and five in a rematch with West in the state quarters.

The Rams’ level of play remained the same Saturday in the state final but frustratingly the result was just the lone goal, which Central Dauphin bettered with a penalty-kick conversion in the first half then Williams’ winner late in the second.

“I definitely think we stuck with our game,” Pennridge coach Audrey Anderson said. “I thought we played pretty good soccer. I can’t even say we got stuck playing a different style, I thought we played great. It’s tough when you’re in this game, there’s a lot of new players that feel that pressure and panic maybe a little bit. But I’m proud of them, I’m proud of how hard they worked.

“And we definitely, I thought, played our game and their defense just wasn’t going to give us much and we knew that coming in. And I’m sure some of them wish they would’ve done something but you know it is what it is and we’ll just have to let this fuel us for next year.” Primwhere’s equalizer came on a free kick, Sophie Craig delivering the ball in the box that was headed up by a CD defender toward the net. Central Dauphin keeper Sammy Widnick reached up to knock it away but on as far as Primwhere right in front, the junior volleying it in.

Pennridge kept the momentum the remainder of the first half, earned a few corners along with a free kick just to the left of the 18-yard box but could not convert on the chances and went to the break still even 1-1.

“And in the second half we kept trying to get in there – they’re a good defense, they’re a good team, they were really able to put up a fight and we just couldn’t come out and capitalize on these opportunities.” After halftime, Grenda sent a ball at the net from the left side that Widnick – with Tomlinson in the vicinity – blocked away before Central Dauphin cleared. Craig later ripped a shot that went just high, hitting off the top of the crossbar and out of play.

“We were really looking to get Liv dribbling,” Anderson said. “She did so well, she’s so dangerous in and around the 18 and I thought our gameplan finding her, having her turn and connect with our forwards – our forwards were great today, we just came up short with the shooting and putting the ball in the back of the net.

“But it was a heck of a game and I’m sure when we think back on it, it is frustrating when you play as well as you did and you still come up short. But I guess that’s how it goes this year.”

The Next Generation? >> Pennridge’s second trip to the state final in three seasons – it claimed the 4A crown in 2020 – had plenty of support in the stands, including a group of young girls Anderson dubbed the “Mini-Rams” who made posters and loudly cheered on the Rams during the chilly contest.

“All these girls that are playing here now were those girls coming up and watching Erin Stevenson and all those players play before them,” Anderson said. “And I feel that’s why this program is what it is because they get to watch these girls and they want to be these girls someday.

“So I think it’s great. They are our biggest fans. They have come to just about – if not – all of our postseason, regular season games. So the future’s looking pretty good for Pennridge High School soccer.” NOTES >> Pennridge was making its fourth appearance in a PIAA girls soccer fall championship game, having previously made the final in 2011, 2018 and 2020. That has Pennridge tied for seventh in appearances with seven other schools.

The PIAA began girls falls soccer championships in 1992 and also had spring girls championships from 1993-2012. Pennridge and the Suburban One League moved to the fall season in 2010.