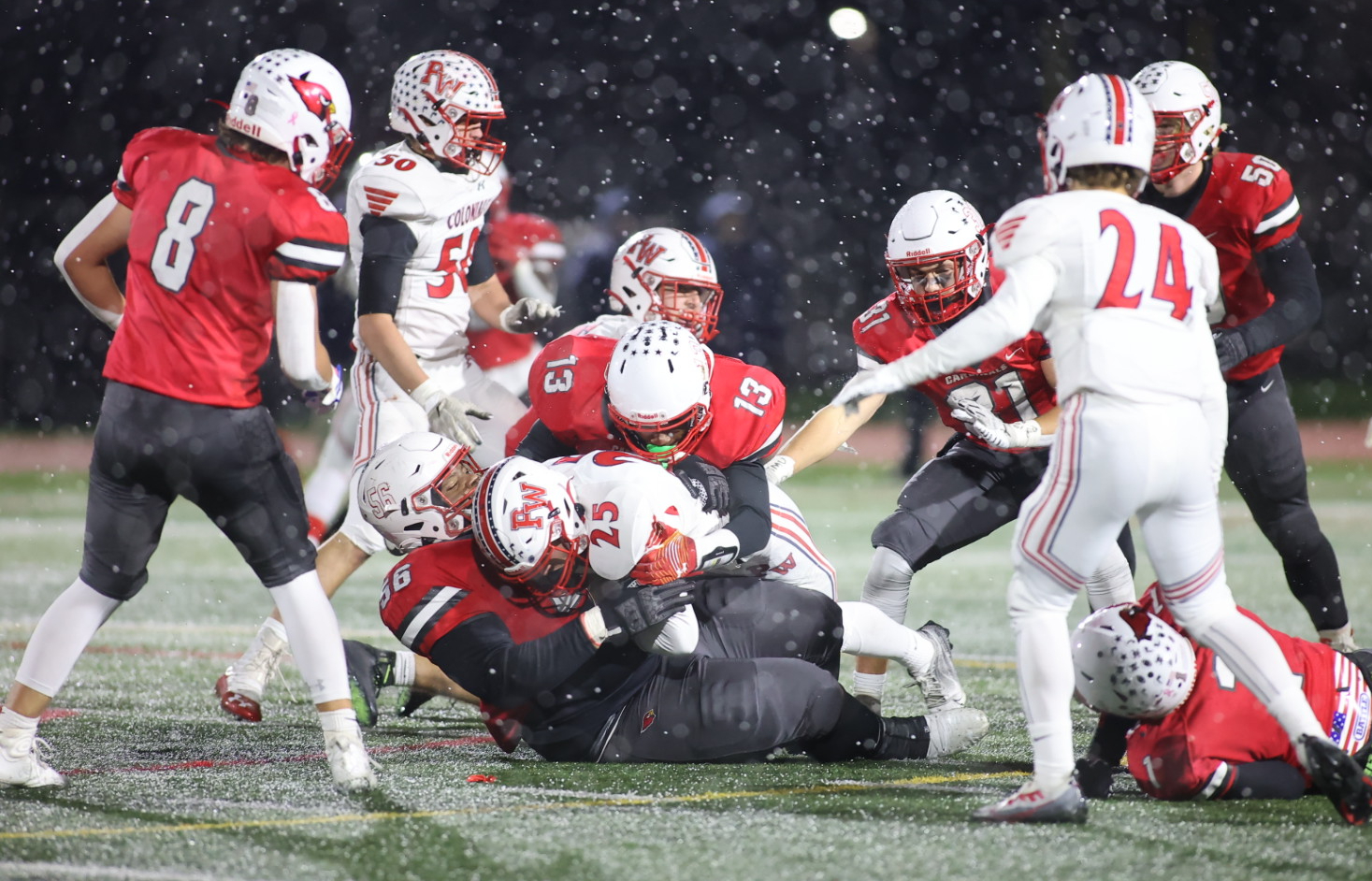 UPPER DUBLIN >> Upper Dublin has been preparing for Plymouth Whitemarsh for months. After allowing 42 points in a district quarterfinal loss in 2021, the Cardinals defense has used any free time this season to get ready for a potential rematch.

When the teams met in the District 1-5A semifinals Friday night, the preparation paid off. Top-seeded Upper Dublin shut out No. 4 Plymouth Whitemarsh, a team that’s scored 30 or more points in nine straight games, and held the Colonials to just 31 total yards in a 30-0 win Friday night at Upper Dublin High School.

“(Defensive coordinator Dave) Sowers, all credit to him,” senior linebacker Jacob Cornbluth said. “He really does it for us. He had us bought it. We came in on Sunday before the week even began and started breaking it down. We just had everyone do their job, everyone in their gap, gap control and we just locked them down.”

“We were hitting on all cylinders,” senior defensive end Riley Hackett, who credited the scout team for getting the starters prepared, said. “Each guy had a job and everyone stuck to it. We believed in each other and we were able to get really good work done.”

The Cardinals held PW’s veer offense to 23 rushing yards on 34 attempts. Through the air, PW was 1-for-6 for four yards. In last year’s district quarterfinal, PW ran for 250 yards and threw for 107.

“We came in with a completely different gameplan,” Cornbluth said. “We completely changed it. We wanted to do this last year, but we weren’t ready to do it yet. This year we were finally able to do it – 365 days later we finally got back.”

“We worked a lot this summer and we got a lot of really good guys in,” Hackett added. “We have a lot of talent up front and we all believe in each other. We were just going at it one play at a time.”

Not only did the Upper Dublin defense keep Plymouth Whitemarsh off the scoreboard, it put points up itself. Griffin Pensabene returned an interception 36 yards for a touchdown and Chris Kohlbrenner picked up a fumble and raced 10 yards to the endzone. Those two turnovers, plus a Nyles Bunn-McNeill fumble recovery, happened in the fourth quarter.

“Credit goes to Upper Dublin,” PW coach Dan Chang said. “They’re a very good team. They’ve got guys everywhere, at every position, who can play. We got shut down offensively. That’s on me. I thought our guys battled hard all night and we just couldn’t move the ball. It’s tough to give these guys a short field and keep our D on the field all that time. We’re going to have to go back to the drawing board and see what we can do against a team like that.”

The first was a two-play drive set up by a Kohlbrenner punt return to the PW 40. On the second play, Shyne Roberts raced 39 yards for a touchdown and 7-0 lead.

Upper Dublin’s Shyne Roberts (1) races away to the Cardinals’ first touchdown of the night against Plymouth-Whitemarsh in their District 1-5A Semifinal on Friday, Nov. 18, 2022. (Geanine Jamison/MediaNews Group)

The second touchdown drive took 14 plays and covered 82 yards. Quarterback Colin O’Sullivan went 6-for-7 on the drive for 68 yards, including a nine-yard touchdown pass to DJ Cerisier. The score made it 16-0 with 6:06 to play.

“(The drive) was kind of a summation of our season,” Upper Dublin coach Bret Stover said. “We’ve been doing that. We had a fumble early, we had a punt return fumble, we never got any offensive momentum in that first half. Then we just got it clicking in the third quarter, then you flip the wind. You got DJ, DJ is a big-body kid. He doesn’t look that big, but he’s a basketball player. He knows how to position himself and he does a really good job.”

The Cardinals will face No. 3 West Chester Rustin in the championship next week.

The loss ends the season for Plymouth Whitemarsh and ends the high school careers for the seniors. The Colonials won two Suburban One League American Conference titles and reached the District 1-5A semifinals twice in the last two years.

“(The seniors) are the standard here,” Chang said. “How they act, what they do. It’s no small accomplishment going through, winning that league two years in a row and delivering there. I think our younger guys are taking that example. They’re hungry and we’re ready to go back and get working for next year.

“They’re making (the district semifinals) the norm, the expectation for us. It’s not good enough to just win the league title, we want to continue to go. It’s what we’re going to strive to do.”