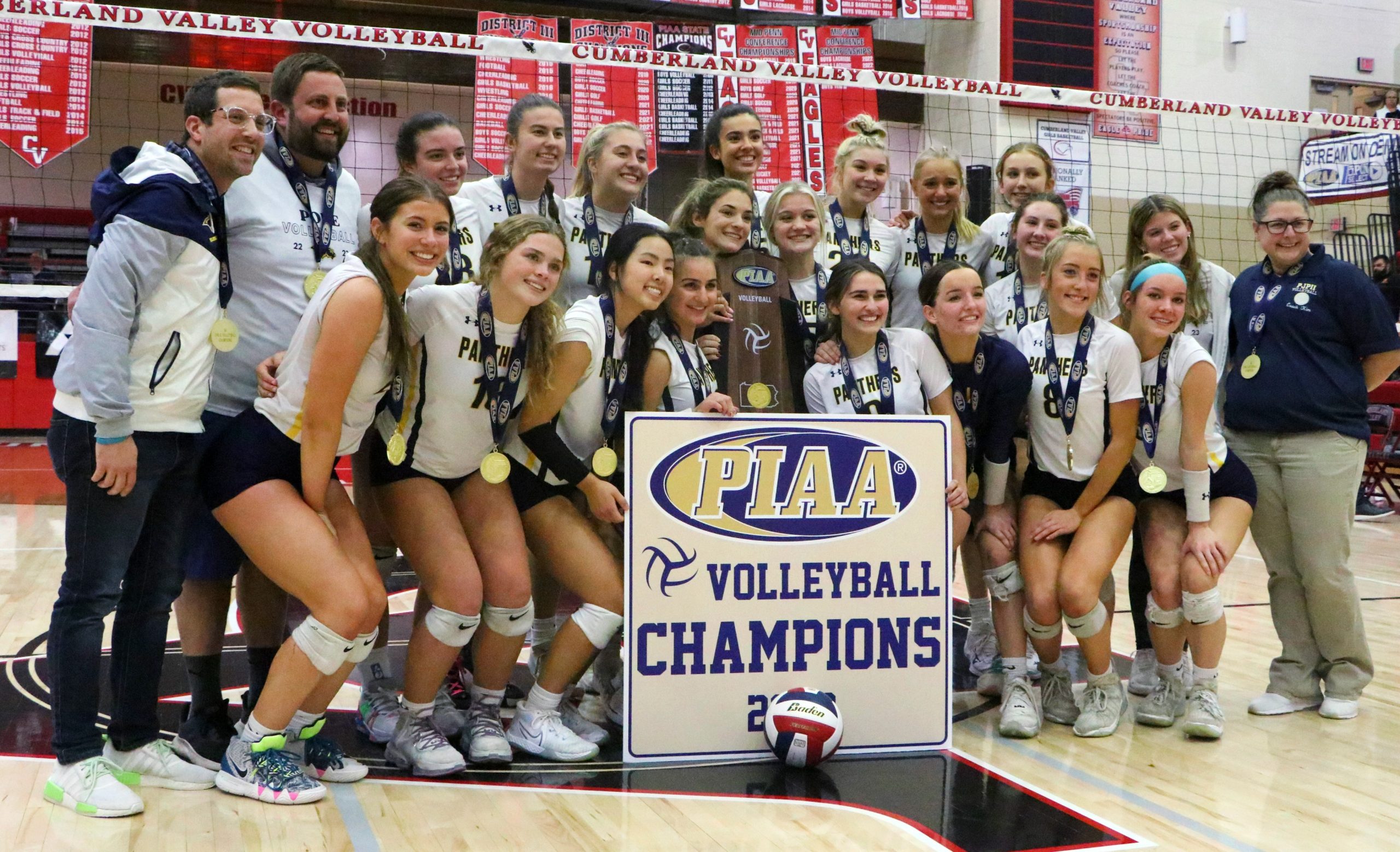 MECHANICSBURG >> Ryan Sell admitted he’ll probably get more sleep now than he had all week.

That’s because the 10th-year Pope John Paul II coach was tasked with game-planning against a WPIAL and PIAA juggernaut in North Catholic, the reigning Class 2A state champ that pumps out hardware like a beehive produces honey.

Despite an ugly first set — the largest margin of defeat in a set for the Golden Panthers all year — Pope John Paul II was a classic case of David and Goliath.

We know how that story ended. The 3A state volleyball final was much the same.

In their first appearance on the biggest stage, the Golden Panthers pulled out a five-set win, 15-25, 25-12, 18-25, 25-16, 19-17, over the Trojans to claim their first state title in program history at Cumberland Valley High School Saturday.

“I just wanted our kids to represent District 1 as best we could today,” Sell said. “I’m at a loss for words on an undefeated season.”

Pope John Paul II has its first state title ever after downing WPIAL power and defending 2A champ North Catholic in five sets!

Neither team went away quietly and took one another to the wire. Past the wire, really. Locked 12-12 in the fifth set, both squads alternated points before an out-of-bounds ball gave Pope John Paul II (27-0) the decisive point, even after being down match point on two occasions.

Already local champions, PJP as Pioneer Athletic Conference and District 1 winner and North Catholic as District 7 champion, neither team was ready to close the book on their onslaughts through the 2022 campaign.

“We knew we had to bring the energy because we knew how good North Catholic was,” outside hitter Hutton Cordrey said. “We just wanted to put it all out on the court because we knew this was going to be our last game.”

Cordrey, a Mercury All-Area first-team junior, posted a team-high 17 kills, particularly heating up in the later sets. She came up with a pair of aces to help close out the fourth frame and force the final set while adding 14 digs on the night. Natalie Ricevuto registered 14 kills opposite Cordrey at the net with four digs. Madison Monahan paced the two hitters with the rest of Pope John Paul II’s offense with 37 assists while coming up with 19 digs defensively.

The Golden Panthers had only encountered one five-setter this season against Twin Valley in the state quarterfinals before Saturday. And with the first-set loss — just the eighth set dropped by the Golden Panthers all season — the murmurs of another North Catholic (22-2) title began after a grueling 10-point margin.

So, naturally, Pope John Paul II burst out with those missing 10 points behind a service run from Gabriella Manza to open the second set with a hefty cushion before the Trojans got on the board.

“I was like, ‘Oh gosh, Might be a long day for us. Or a short day.’ But we bounced back and served really, really tough in that second set and basically had them running all over the place,” Sell said. “Being up 10-0 is not what you expect.” With strong serving led by Gabriella Cooper, and timely hits from Maeve Gallagher (nine kills), Pope John Paul II was able to climb back into the match and hang with the volleyball powerhouse that’s made it to the final four the last three years and won the WPIAL four of the last five.

“Probably the best setter we’ve seen all year,” Sell said on Jones. “(Feczko) is one of the best outside attackers we’ve ever seen.”

While not as explosive as the opening frame, the Trojans put Pope John Paul II in an unfamiliar place in the third set before the latter was able to keep the ball off the net and create more opportunities to swing in fourth.

That sense of urgency from the Golden Panthers came at the right time against a star-studded defense that entered the game with just six sets dropped all year. Cooper — a four-year starter and Mercury All-Area first-team selection — came up with 19 digs. Gabriella Cooper made a team-high 23 digs in the state final.

“It’s really, really incredible. I couldn’t have asked for a better group of girls to be on here starting with,” Grace Cooper said. “Every day we showed up, put in continuous work and this is something we wanted so bad. The hard work really paid off.”

While Sell has had his fair share of postseason action over the past decade, the longtime coach mentioned after the semifinal that there was something different in the air about his 2022 squad. Donning his own gold medal for the first time, he took the moment in as players met with their families for photos, some crying, others at a loss for words.

And while he’s losing five seniors on a championship team to graduation, Sell sees the roots already planted to have another go through states next year, now that the program got over the hump and then some.

And those players are more than well aware of the school history they notched in 2022.

“I’m so grateful to be a part of this winning legacy. This is insane for us, this is our first time even making it this far,” Cordrey said. “We made the quarterfinals once, that was 10 years ago. We’re just really excited. We’re really amped up.”