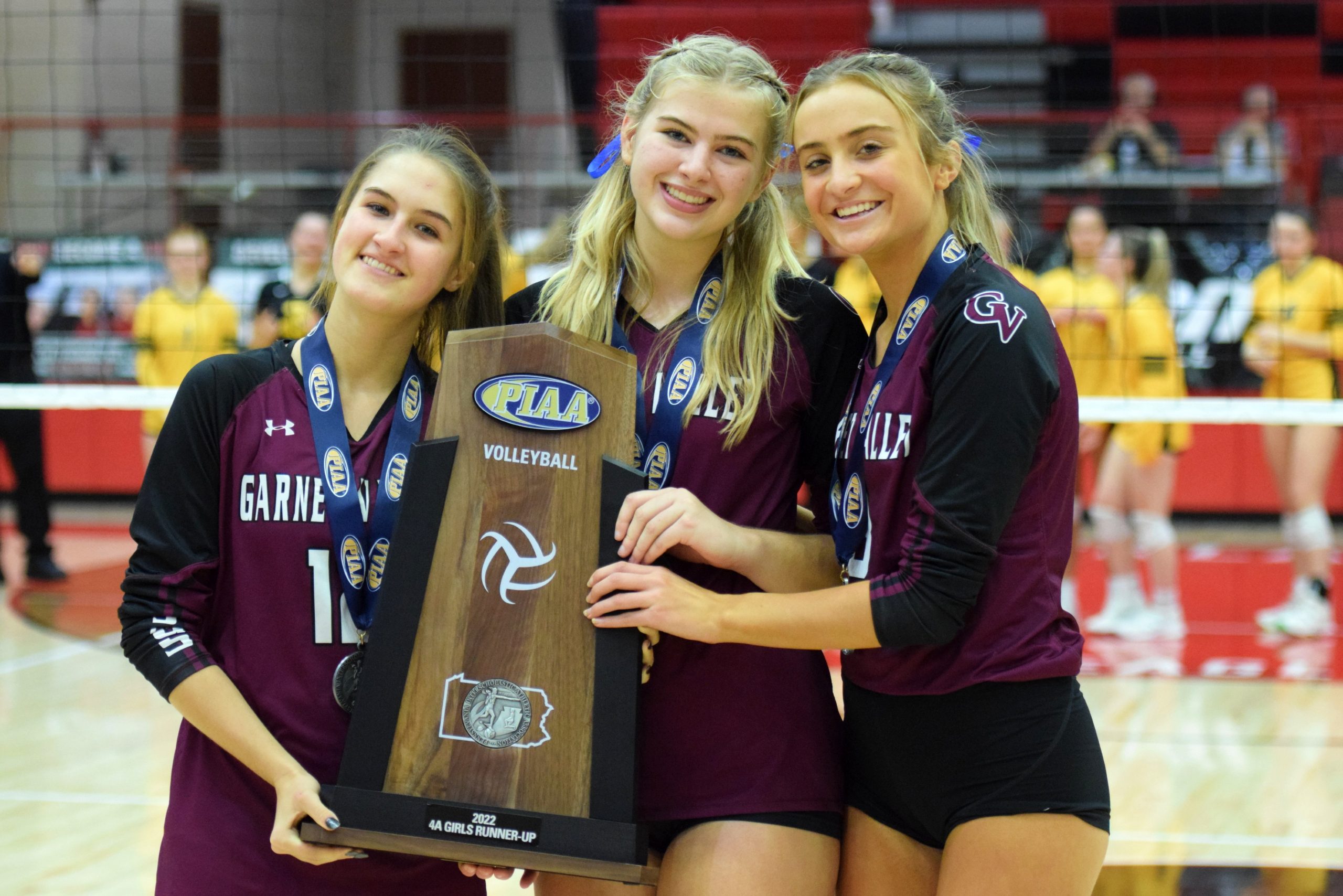 SILVER SPRING TWP. — The point went to Garnet Valley. But the more important commodity, the momentum in the PIAA Class 4A volleyball final, went the way of North Allegheny Saturday night.

It was late in the second set, after a first set that required 28 points for the Jaguars to win. Tied at 20, it took Garnet Valley one, two, three, four, five attacks before a Sarah Weins tip over the block found the floor at Cumberland Valley High School. Through a daunting effort at the net, through a great dig by Rebecca Pilotta in the back row, through three gets by North Allegheny’s superb libero Caroline Curran, the Jaguars had to work hard for their point.

That effort, and so many smaller installments along the way, eventually caught up to them.

The match pivoted not long after what could’ve been Weins’ momentum-securing kill.

“I think our defense was incredible, and getting all those digs really put the momentum on our side,” NA’s senior opposite hitter Ella Deeter said. “Even that point we lost, I think the energy was with us. And from that point on, we were kind of just steamrolling through. They couldn’t stop us.”

Garnet Valley (26-2) had a chance even after that, going up 24-22 on a pair of North Allegheny errors. But the Tigers (22-1) rallied for four straight points, a Mia Tuman dig looping over the net and finding the floor to end the second and, in hindsight, Garnet Valley’s hopes of springing an upset.

It sent the Jaguars home with silver medals … and a profound sense of what might have been.

“Winning that set makes all the difference,” Garnet Valley senior setter Maddie Wood said. “You win that set, the entire course of the (match) changes. We win that set, we could’ve swept them. We could be wearing gold medals.”

Instead, it was North Allegheny, winning a battle between the only two teams to lift the Class 4A trophy since the PIAA added that classification. The District 1 champion Jaguars, in the final for the first time since upsetting Parkland in 2016, were ready to play David to the District 7 Goliath.

They prevailed in a thrilling first set, powered by Sarah Wood’s tremendous start. She served two aces to put GV up 15-10, though North Allegheny rallied to 20-all. A 24-21 lead ended up at 24-all on Avery Butcher’s serve run for the Tigers.

The Jags caught a break when a point was replayed for hitting the basketball stanchion, and though Sarah Wood missed by inches on a cross-court putaway to win it, she responded with a kill and a block by Weins to take the first set.

“It really kind of gave us a sense of security,” Maddie Wood said of her freshman sister’s early outburst. “OK, we’re in this, we got comfortable, we’re here. We’re like, OK we can do this. But we got too comfortable.”

The second set was there for the taking, despite North Allegheny controlling most of it. Kills by Carissa Tresser and Ella Zimmer through the middle not only put Tuman in position to win the set but also laid out the blueprint for the avalanche that ensued.

The twin forces of attrition – of North Allegheny tracking down swings that had hit the floor early, and of fresher middle blockers wreaking havoc at the net – were too much for the Jaguars to combat.

Zimmer had 11 kills and six blocks, including the clincher. Fellow middle Maddie Fickess paired eight kills with four blocks. Add in Deeter, who had six blocks plus 10 kills and 14 digs in an all-around sensational night, and space on the other side of the net seemed to evaporate before Garnet Valley even swing.

“They were unstoppable,” Deeter said of the middles. “Whenever we were able to get the ball to them, they couldn’t be stopped. I think that allowed our pens to be opened up and they were huge.”

“I think we had a hard time covering that kind of kill,” GV outside hitter Klaira Zakarian said. “They have some really great middles over there, and that was one of the biggest reasons that we won. We couldn’t get to the middle in time to cover.”

The third set was a rout, North Allegheny scoring the first eight points and leading 15-2. It took a late surge from the Jags to merely tie the PIAA mark for the most lopsided set in a final since the format changed to first-to-25 in 2003. An 11-5 edge in the fourth set, thanks in part to two kills and a block by Zimmer, wasn’t severely threatened.

Zakarian helped keep Garnet Valley in the game with 14 kills. Sarah Wood added 16 kills and three aces, but her 30 serve receptions visibly tired the freshman as the game wore on. Zakarian’s opposite, Kelly St. Germain, had a kill for the first point of the match, then not another until late in the third. She finished with four kills and was tasked with a lot of defensive work. Middles Weins and Isabella Tront had two kills each and combined on five blocks. Maddie Wood had 37 assists, though she didn’t attempt a kill until late in the third.

Tuman, North Allegheny’s Ohio State-bound setter, kept the attack humming with 41 assists, plus 14 kills and 12 digs. Curran had 25 digs out of the backline.

Despite the pain Saturday night, there were few tears when Garnet Valley collected its runner-up trophy. There may be later, but there’s plenty to celebrate in a run that even surprised some in the program.