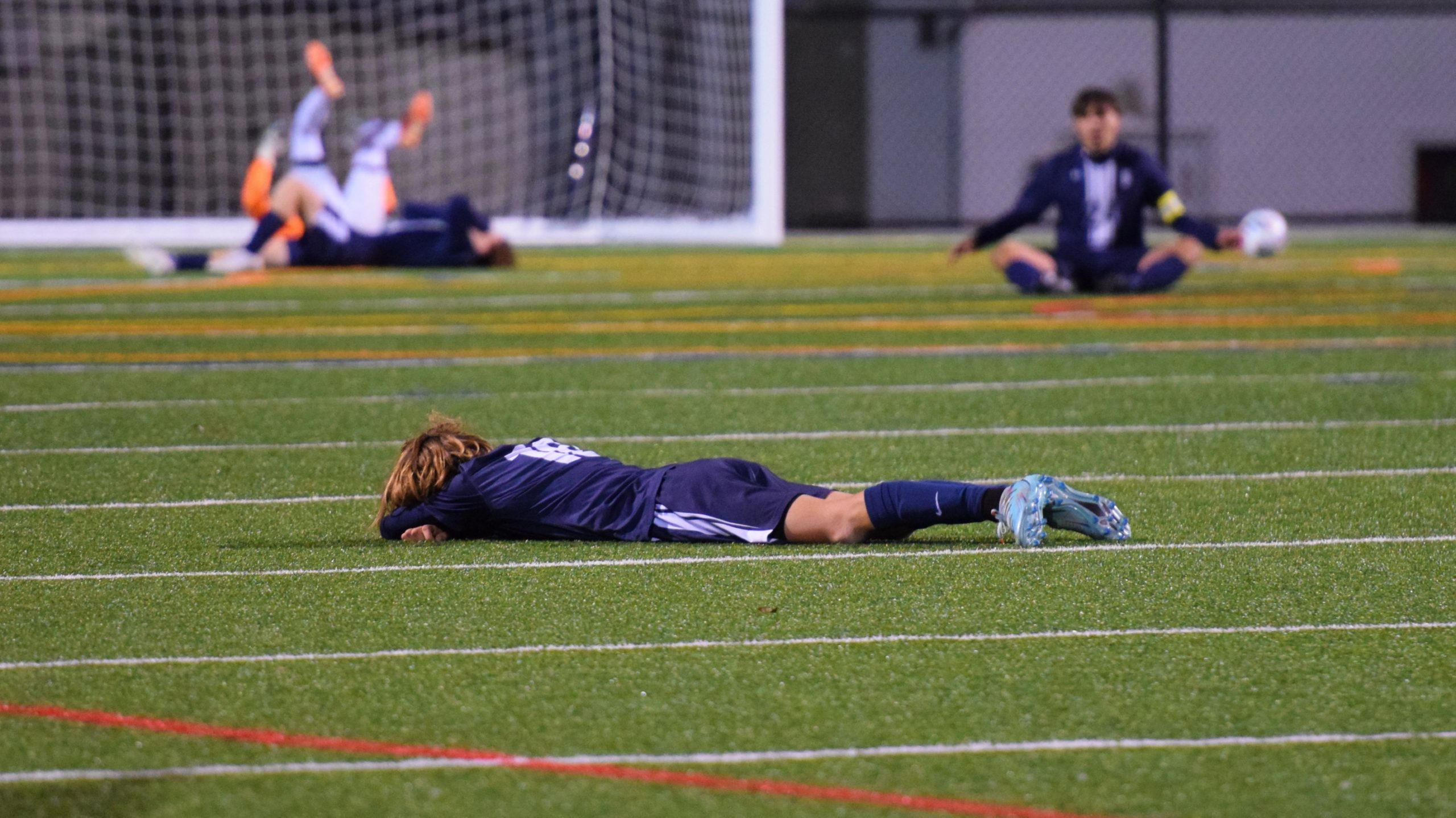 Springfield Township players react after losing to Hershey in double overtime in the PIAA 3A championship on Nov. 18 at Cumberland Valley. (Austin Hertzog - MediaNews Group)

MECHANICSBURG >> Springfield Township threw everything it could offensively at Hershey on Friday night, producing a multitude of scoring opportunities and numerous shots on the net, only to be kept off the scoreboard time after time.

On the other hand, Hershey sat back and looked to counter-attack. That strategy finally paid off once. And in this case, once was enough when Ian McGrorty scored with 11:41 remaining in the second overtime – the 109th minute of the match at Eagle View Middle School – to give Hershey a 1-0 win and the PIAA Class 3A boys soccer championship.

Hannes Budde made nine saves for Hershey (22-3), keeping the Spartans (21-4) from adding a first state title to a long list of program firsts accomplished this season.

“Every player made a contribution, whether it was one minute or five minutes,” said Trojan junior McGrorty. “I’m so proud of the guys.”

Hershey wins it, massive counterattack and they cash in at 11:41 2OT to defeat Springfield Township 1-0 in PIAA 3A boys soccer championship pic.twitter.com/SPCiWkp6t3 Hershey’s Ian McGrorty celebrates after scoring the winning goal in the PIAA 3A championship on Nov. 18 at Cumberland Valley. (Austin Hertzog – MediaNews Group)

“We took great shots,” said Spartan senior captain Schmidt. “We did our best.”

District 1 champion Springfield had Hershey – the District 3 winner – back on its heels through most of the first half. Budde made a save on a shot and a rebound try hit the left post with 13 minutes to go, beginning an extended period of pressure applied by the Spartans. Then Budde stopped a hard shot off a deflection a few minutes later and made a diving save on a free kick around a wall by Nick Hanushchak with one minute remaining until the intermission.

Springfield almost won it midway through the first extra session when Ben Hubley passed to Riley Martin for a blast from the left wing, but Budde was again equal to the task.

Finally, McGrorty brought the ball out of the backfield on a counter-attack and passed it to Niklas Budde, who passed it down the sideline. Meanwhile, McGrorty continued on to the goal and was in the right place at the right time and knocked in the game winner after a goalkeeper save and a deflection in front of the net.

“I just got the deflection,” said McGrorty. “We dug deep. That’s to say the least.” “They were packing it in and counter-attacking and it worked for them,” said Spartan coach Dan Meder. “Their goalie made some good saves.”

Springfield ended up with a 7-3 advantage in corner kicks after neither side had any in the first half. Spartan keeper Julian Casabon-Aznar made four saves.

“I think we just kept possession as a team,” Schmidt said concerning his team’s ball control. “We had good passing, the talk was clear. We had the shots. We needed to follow up and finish.”

Hershey had won a similar game in the semifinals, 2-0 over Cathedral Prep.

“As coach (Andrew Maya) said after our last game, we wanted to make it boring,” said McGrorty. “We did change our formation a little bit, but everybody bought into it. And we just kind of sat back. We have a great goalie.” Springfield’s NIck Hanuschak tangles with Hershey’s Jake Moyer while competing for the ball during the PIAA 3A championship on Nov. 18 at Cumberland Valley. (Austin Hertzog – MediaNews Group) Springifield Township center back Chase Rubincam wins a loose ball ahead of Hershey’s Ian McGrorty during the PIAA 3A championship on Nov. 18 at Cumberland Valley. (Austin Hertzog – MediaNews Group)

The Spartans had scored 11 goals in three state games – including a 2-1 semifinal win over Phoenixville – as they frequently made good on their offensive opportunities.

“That’s what we’ve been doing all season,” said Meder. “We capitalized on them.”

Meder thinks his players will realize what they accomplished when Friday’s disappointment wears off.

“When we look back on this unbelievable season in a couple weeks,” he said. “We’d never won the league or districts or made it to states. They changed all that and played really well in the final. It just didn’t go our way.”