Football: Coneys’ catch gives Bonner-Prendie a boost past the Bucs 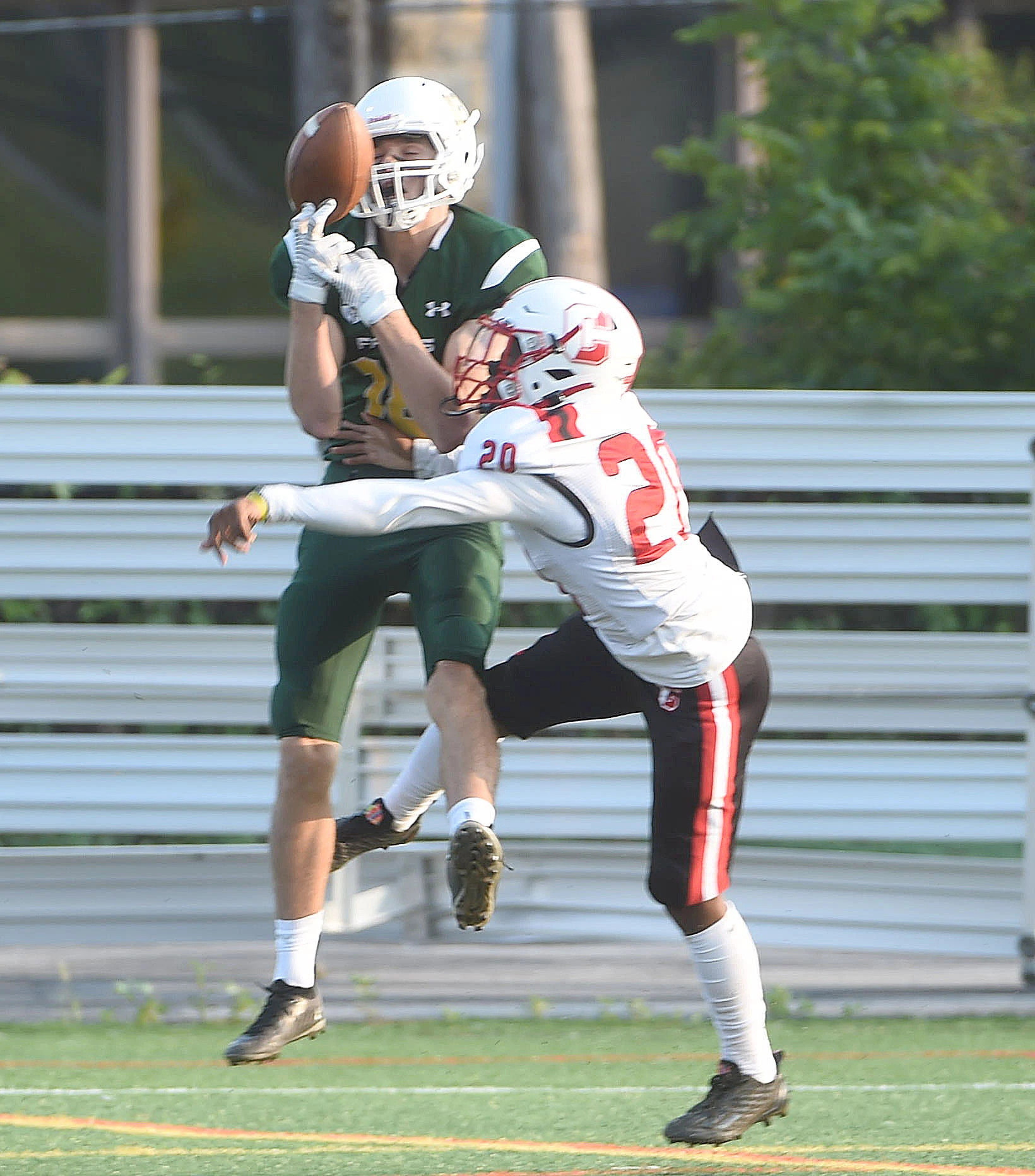 Thus, with less than two minutes to go before the halftime break, Bonner & Prendergast faced its fate. Senior wide receiver Zac Coneys knew they had no other choice but to score six points before heading off to the locker room at Ridley High School. The Friars’ season was hanging in the balance.

Quarterback Justin Shepherd connected with Avery Hankey on a five-yard passing score, but the Friars were whistled for holding with two seconds left on the clock. That pushed them back 10 yards.

One more play. The Friars had to make it count.

“Our initial thought was that since me and (wide receiver) Jalil (Hall), one of us had one-on-one without a safety over the top. So we were focused on who was going to be that guy, who was going to be open,” Coneys said. “So it worked out that the weak side outside linebackers were flushing out to the flat …and when they wanted to come over the top, we wanted to take that chance.”

Coneys’ number was called. Shepherd lofted a pass in the back of the end zone for the big man. Interboro cornerback Ebenezer Affainie jumped in front and nearly came away with an interception, but the ball shot out of his hands and into the waiting arms of Coneys, who secured the catch as he fell to the turf, knees in-bounds.

“When the ball was coming, I was thinking back shoulder,” Coneys said. “Then I saw I had to hurry to get inside and I realized I had to knock it down. He ended up bobbling it and thankfully I was there and it landed in my hands.”

That one play gave the District 12 champions the momentum they sought. The Friars scored three more TDs in the second half and claimed a 33-21 victory over the District 1 champion Bucs in a PIAA Class 4A tournament first-round contest.jBonner & Prendergast (11-1) will return to Ridley next Friday to play District 2 champion Crestwood.

“That was a huge play,” coach Jack Muldoon said. “That was me praying to my mom, asking her to give me something. If we were down 21-7 at the half, I don’t know how this would have turned out. It was a huge momentum shift.”

The Friars relied on Hankey and Isaiah Session the rest of the way. Session scored on three runs, including a 14-yard scamper in the third quarter that trimmed Interboro’s lead to 21-19. Coneys caught the two-point conversion pass from Colin Finnegan to tie the game. Session’s nine-yard jaunt to the end zone early in the fourth quarter gave the Friars a 27-21 advantage.

Hankey eclipsed the 1,000-yard mark for the season. He had two TDs runs to go with 136 yards on 27 carries. Session ran the rock 12 times for 81 yards. Shepherd threw for 93 yards, including a clutch 17-yard pass to Coneys to help put the game to sleep in the fourth period.

In the second half the Friars ran the ball 27 times for 166 yards.

“It was real important,” Hankey said. “We rely on our run game a lot and we had to get it going. Once we started rolling we didn’t stop.”

Interboro went ahead 14-0 on the strength of 69- and 21-yard scoring runs by Kamara, who broke Delaware County’s single-season rushing and touchdown records last week. While the senior accrued more than 200 yards of total offense (154 rushing, 101 receiving) he was held to 29 yards on six carries and no catches in the third and fourth quarters.

“We just didn’t want him to get upfield anymore,” said Coneys, who plays outside linebacker. “No. 57 (Rocco Barrone), their guard, is a star player. He pulled every time and opened up every hole. So we mainly focused on what (Barrone) was doing and tried to clog him up. Then we started taking away the holes.”

Bonner & Prendergast (11-1) tied the school record for most wins in a season, matching the 1994 Catholic League championship team, which finished 11-2 under coach Mike “Stumpy” Coyne.

“These guys deserve it,” Muldoon said.

Interboro (11-3) will return to Phil Marion Field for its annual Thanksgiving clash with Ridley to end the season.