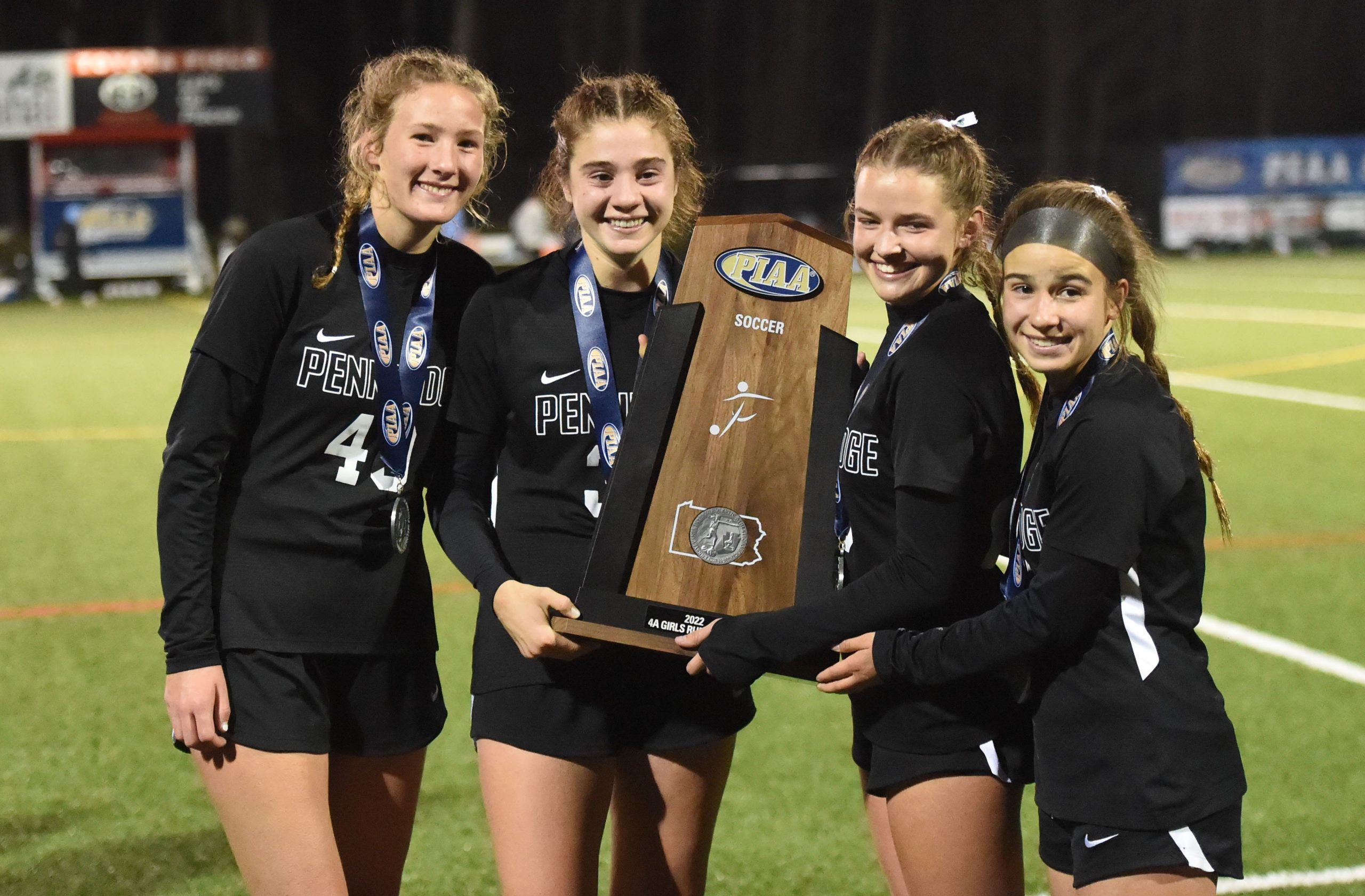 MECHANICSBURG >> As a freshman, Liv Grenda experienced the ultimate peak of winning a state title so as the Pennridge junior handled the silver medal around her neck Saturday, it didn’t feel anywhere near as good.

Just like in 2020, a single chance had decided the outcome of the PIAA 4A girls’ soccer title match. This time, it was the Rams that were on the wrong side of it instead of the other way around, a deflected ball presenting Central Dauphin the chance it needed to capture its own glory.

A late goal by CD super sophomore Kayden Williams was the difference as the Rams out of District 3 edged past Pennridge 2-1 at Cumberland Valley’s Eagle View Middle School.

“Looking down and seeing a silver medal instead of a gold one, it hurts a little bit, especially when you feel like you put so much into the game,” Grenda said. “We’re going to come back so much stronger. Part of it is we won it in 2020 so we don’t really know this feeling of coming in second so we’re going to come back next year as hard as we can and if we get back here, hopefully when we get back to the state championship next year, we’re going to remember this feeling.” The Pennridge girls soccer team shows its sadness after its 2-1 loss to Central Dauphin in the PIAA-4A final on Saturday, Nov. 19, 2022 at Eagle View Middle School. (Mike Cabrey/MediaNews Group)

The match played as expected, with the two teams sharing more than just a mascot or green and white as their primary school colors. CD has applied plenty of pressure to opponents all season, which has been Pennridge’s calling card for years so even before the first tap it had the makings of a game where one or two chances would decide it.

Central Dauphin’s first real foray up the field proved it, a foul in the box spotting the mid-state Rams a penalty kick that  stalwart center midfielder Nia Chinapoo buried for a 1-0 lead not even nine minutes into the game. It was an early tipping point but Pennridge responded as it has all season and moreso throughout this postseason by putting on even more pressure.

Tori Angelo, who put in a high level of work that saw the junior absorb a lot of contact with few whistles, had a shot on goal soon after. A corner, another shot on goal and a few opportunities that were dealt with by Central Dauphin kept Pennridge out until the District 1 Rams drew a foul with about 15 minutes left in the first half.

Sophie Craig played a good ball in which was headed back by a CD defender and forced keeper Sammy Wianick to bat the ball back into play. Hailey Primwhere followed the ball in and the junior was right there to clean up on the front door, booting in a right-footed take to level the score 1-1.

“I’m not like a star on this team but when I go in, I play for my team and give it my all,” Primwhere said. “When I’m on the field, I have to do what I can for my team. Following shots for goals is something I’ve really been working on. I wanted to win this game, we all wanted to win, so I was giving my all and everything was going to net.” Pennridge’s Hailey Primwhere (29) celebrates after her goal in the first half pulled the Rams even 1-1 against Central Dauphin during the PIAA-4A final on Saturday, Nov. 19, 2022 at Eagle View Middle School. (Mike Cabrey/MediaNews Group)

Primwhere’s effort was emblematic of how this Pennridge team got to this point. The Rams have some excellent individual players but they weren’t playing in the final match of the fall because one or two of them dominated all year. Injuries derailed their season last fall, so the team put an emphasis onto building depth and using the sum of its parts.

“It’s hard to have the right words to tell your players after the last game when you’re season ends and it doesn’t go your way,” Anderson said. “I was super-proud of how we came into this game. We were playing good soccer and played good soccer throughout the game, we just couldn’t finish our opportunities and ultimately they were able to.

“It speaks volumes to what this program is willing to do to be back here. I get it, it didn’t go the way we wanted it to but it’s still an accomplishment.” Central Dauphin survived the rest of the first half, keeping Pennridge at bay despite four corner kicks and a free kick at the very edge of the box thanks to some timely intervention by center back Isabella Zulli and some good goalkeeping by Wianick. Grenda forced Wianick into a bold save early in the second half off a tight-angled shot and save for a spell of pressure going back by CD, Pennridge kept itself on the front foot.

The frustration for Pennridge, which put 10 shots on goal, was that they weren’t going in the back of the net. That number doesn’t even include the multitude of runs or challenges in the offensive third that either got disrupted or were a touch, half-step or second too late to come to fruition.

“It’s very frustrating, especially if the outcome is like it was tonight but throughout the season we’ve learned that to never become frustrated, we need to be calm and support each other,” Craig, a co-captain, said. “Although I know we’re all going to get home and be hard on ourselves and blame ourselves, we win as a team and lose as a team. We take this, we roll with it and we come back stronger next year.”

Craig had one of Pennridge’s best but also most frustrating chances of the second half. With 13 minutes left, the junior midfielder ripped a shot off the right flank that drifted a few inches too high, stinging the top of the crossbar and out for a CD goal kick.

Joey Tomlinson, Pennridge’s only senior, chased the ball all over the pitch for 80 minutes and prompted a few of those bail-out plays from the Central Dauphin defense. The co-captain, a Robert Morris recruit, echoed the frustration of not being able to place a second ball in the goal but couldn’t have asked for much else in last go-round with the Rams.

“We wanted that goal so bad and it wasn’t going in, that was the most frustrating part,” Tomlinson said. “I’m really proud of this group, they’ve done a great job for me over the past three years.I wouldn’t want to be playing with any other team.” Central Dauphin celebrates after Nia Chinapoo (14) scores on a penalty kick against Pennridge during the first half of the PIAA-4A final on Saturday, Nov. 19, 2022. (Mike Cabrey/MediaNews Group)

Pennridge’s back line put together another robust effort, the combo of Casey Malone, Anna Croyle, Hannah Primwhere and Meredith Blannett limiting Central Dauphin from the run of play. Unfortunately for them, there wasn’t much they could do in the final five minutes when that one decisive chance fell in CD’s path.

A shot from distance deflected off a Pennridge defender and into an open area of the field that gave Williams a sliver to get in. The sophomore was able to settle the ball and showed a lot of composure, ripped it off her right foot just before two backs arrived to make it 2-1 with 4:23 to play.

Pennridge threw all it had at the net in the final four minutes but CD was able to see it out. Often, the final team huddle is a good-bye with only Tomlinson graduating, Pennridge was already lighting a fire for next fall.

“We want to remember this feeling, remember how bad we feel right now,” Croyle said. “Luckily, we’re fortunate enough to have another year and return a lot of people. We’ll miss Joey a lot but hopefully we can find our way back and find our way to the winning side.

“We’re all really close, there’s not a player on this team who wants to play selfish or who cares who scores. We want to succeed together and win or lose, we’re together.”