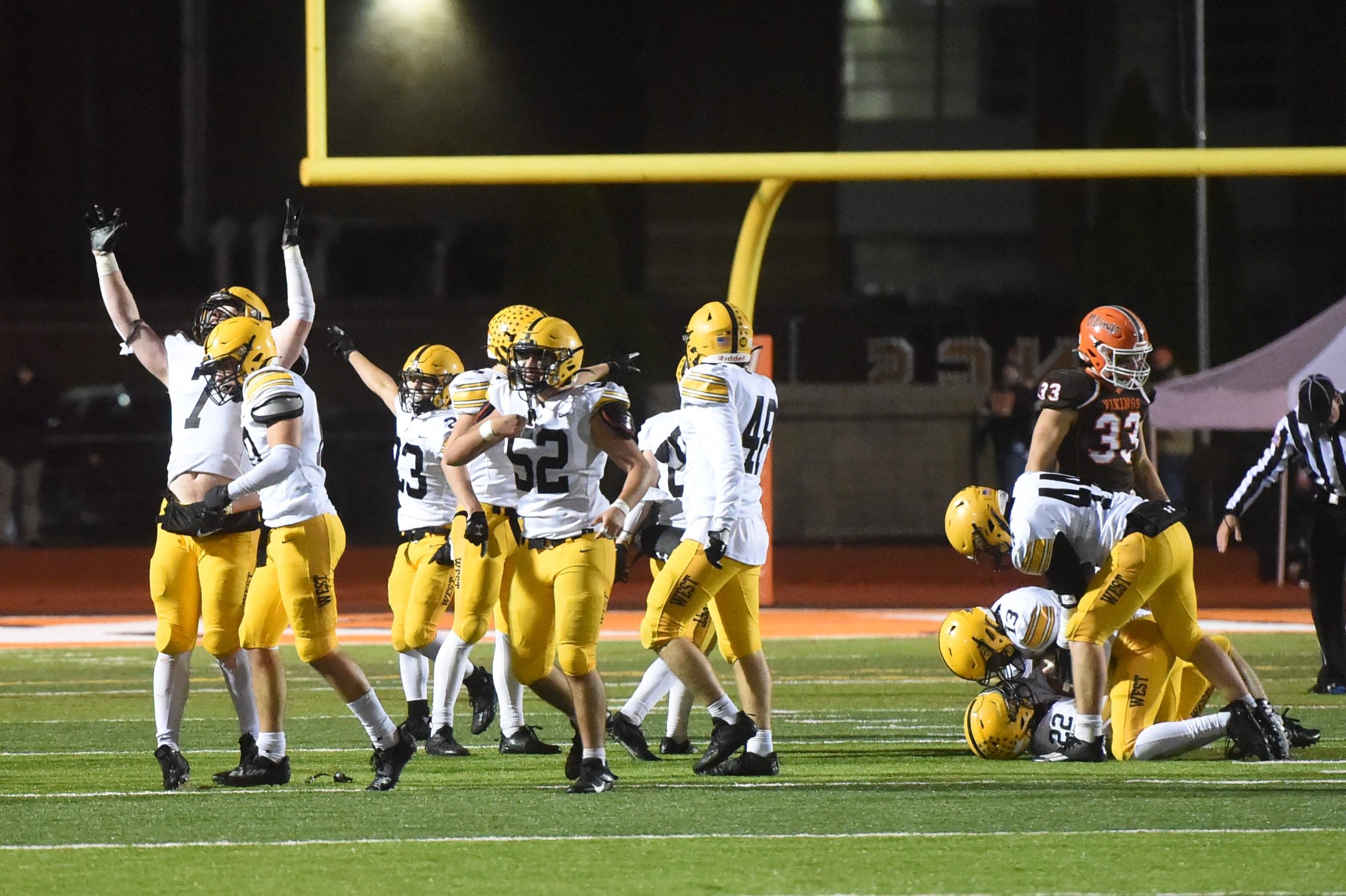 Central Bucks West celebrates after recovering a fumble on a Perkiomen Valley punt return late in the fourth quater of their District 1-6A semifinal on Friday, Nov. 18, 2022. (Mike Cabrey/MediaNews Group)

GRATERFORD >> Central Bucks West is thriving in their role as underdogs.

That combination of words probably sounds like blasphemy to those who’ve followed local high school football for decades. But the No. 11 seed Bucks are proving themselves as adept in this new role as they were as traditional powers.

CB West’s defense controlled the second half, and the offense did just enough to fight past No. 2 Perkiomen Valley, 14-13, at Thomas J. Keenan Stadium on Friday night.

Traditionalists would certainly recognize the defense that held PV to 43 yards of offense after halftime, causing a pair of game-changing turnovers along the way. But even powerhouses change with the times.

As a team that likes to grind out their wins via the running game, CB West found some tough sledding against a stout Perkiomen Valley defense that held the Bucks under three yards per carry on the evening. Central Bucks West’s Conor McFadden (2) catches a pass down the sideline against Perkiomen Valley during their District 1-6A semifinal on Friday, Nov. 18, 2022. (Mike Cabrey/MediaNews Group)

Luckily, Conor McFadden was there every time they needed a big play. McFadden, a junior WR/CB, caught five passes for 116 yards, including two critical first-down receptions on a ten-play, 80-yard drive that ate up much of the third quarter and culminated in Ganz Cooper’s one-yard score that tied the game at 13.

“I think my coaches depend on me, they put their full faith in me,” said McFadden. “[Making big plays] is my job on this team.”

With a one-point lead and under two minutes to play, Perkiomen Valley looked to have a final chance to advance to next week’s district final.

But the Bucks forced a fumble after a punt, recovering at the Vikings’ 27-yard line and running out the clock to clinch a spot in next week’s District 1 Class 6A championship game at No. 1 Garnet Valley. The Bucks will be in search of their first district championship since 2000. McFadden provided the big plays on offense and showed remarkable poise in leading his team back after Perkiomen Valley seized momentum at the end of a tightly contested first half. The Vikings held their own throughout a scoreless second quarter but began living dangerously as the second quarter began.

An offsides penalty gave CB West its initial first down of the game, and two plays later Cooper found McFadden down the sideline for 48 yards and a first and goal.

On fourth down from the Vikings’ 2-yard line, PV’s Robbie Sturges rushed Cooper’s throw into the end zone, which landed incomplete and allowed PV to keep the game scoreless.

CB West has a fresh set of downs in Perky territory. pic.twitter.com/FB2U8Lv9KL

A botched field goal snap ended the Bucks’ next possession, but CB West finally seized the opportunity on the Vikings’ first snap of the ensuing drive.

Jack Williams read a screen pass all the way, snatching it and racing 27 yards for the opening score.

“We watched their film all week, and Coach (Rob Rowan) was preaching to watch the tackles,” said Williams, another junior. “So when I saw something we recognized, I pounced on it. They trust me to make these plays.”

But PV would respond on CB West’s next drive, as it was Sturges picking off a quick out and taking it to the West 22. Two plays later, Ryan Klimek (12 rushes, 67 yards and a touchdown) took a handoff around end, with Cole Euker sealing off the outside. Strong blocking on the perimeter allowed Klimek to race untouched 21 yards and kicked his own point after touchdown to knot the game at 7.

But the Vikings truly seized momentum just as it appeared the teams would head to the locker rooms tied. On a 4th and 18 from the CB West 30, QB Pat MacDonald threw a jump ball into the left corner of the end zone, where Andrew Keough was one-one-one with a CB West defensive back.

Keough reached up through great coverage — and made a better grab, coming to rest in the end zone. Improbably, the Vikings had their first lead at 13-7, only 14 seconds before halftime.

McFadden was in man coverage on the play for CB West.

“Those small mistakes make the difference,” he said, “so with that play coming right before halftime, we talked in the locker room about making the small adjustments.

“I think if I get my head around, I could’ve made a better play on the ball. But we’d played a pretty solid half to that point.” After an exchange of punts, McFadden got CB West out of a hole with a 30-yard catch on the eventual game-winning drive. He would make another 17-yard play in PV territory, which combined with the hard running of Eli Boehm and Vinny Cherubini to set up Ganz’s 1-yard sneak.

“It works out well, it’s a good combo and I know Ganz can get the ball to me,” said McFadden. “I have faith in my ability – if they play off me, we’ll throw hitches down the field, go ten yards at a time.

“And when we have the opportunities, we’ll take a shot down the field.”

Speaking of opportunities, McFadden and the defense made sure Perkiomen Valley’s were limited. After the Vikings ended the first half with consecutive touchdown drives, CB West forced punts on each of PV’s four second half possessions.

Coming out of a timeout on 4th-and-18, Pat MacDonald rips one 30 yards to Andrew Keough for a score.

Vikings take the lead, bad snap on the PAT.

Perkiomen Valley coach Rob Heist was the last person to leave the field on Friday night, as he often is.

This time, Heist was offering his appreciation to all of his players, but especially the 31 seniors who played their final game as Vikings.

The only thing that made it any easier was his confidence they’d be back some day.

“We had a player on our sidelines tonight from the Class of 1974,” said Heist. “We had kids who graduated last year, guys who graduated 15 years ago. I said before the game, this is what our program is all about. It means something special to wear that uniform and put on that orange helmet on Friday nights.” Central Bucks West’s Viinny Cherubini (8) gets into open space during a run against Perkiomen Valley during their District 1-6A semifinal on Friday, Nov. 18, 2022. (Mike Cabrey/MediaNews Group)

“We won 11 games, we won our league for the fifth time in seven years, and we lost to a great team by a single point in the third round of the district playoffs. That’s a great season.”

Best of all, some of the players who featured heavily for PV on Friday – two-way lineman Cole Euker, linebackers Drew Kenworthy, Carter Euker, and Robbie Sturges, and quarterback Pat MacDonald – will be back to take another run at the PAC title and more in 2023.

“I don’t need to be too creative,” said Heist. “Our mantra all offseason will be simple – one point. That one point will drive these juniors, and sophomore to push harder and overcome this hurdle.”

CB West heads to Garnet Valley next week with a record of 9-4, but with eight wins in their last nine contests. The Bucks have wildly outperformed their No. 11 seeding to this point.

“Definitely proving the rankings wrong,” said Cooper. “But I don’t think it’s really a focus. We know how good we are, so we just come out here level-headed and ready to go every week.”