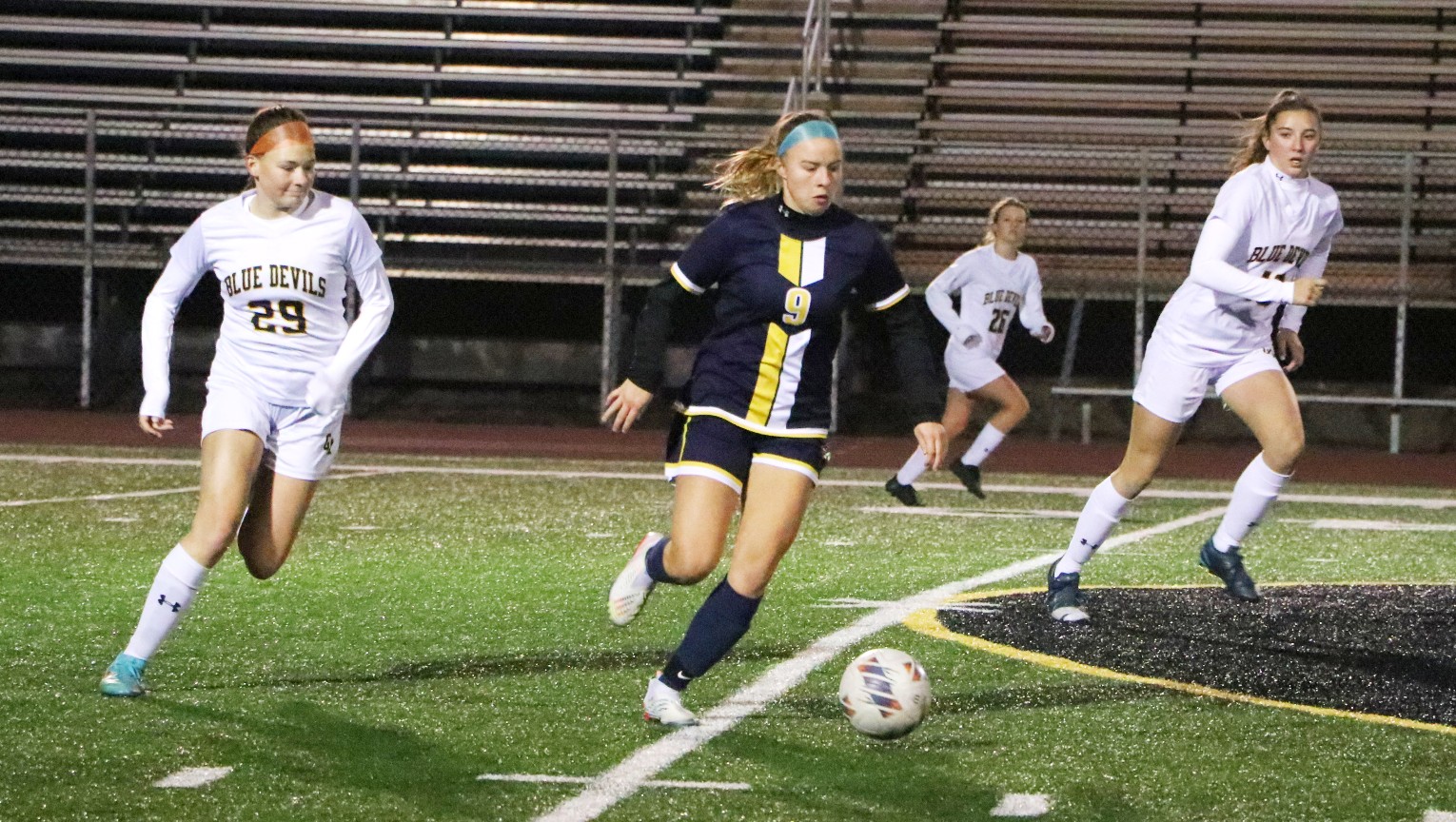 MANCHESTER >> Mike Freed told his team during Upper Perkiomen’s first practice that whichever game is their last together, would be his last period.

Set to retire, the longtime girls soccer coach has since orchestrated a magical run that saw the program’s first District 1 title and first state tournament appearance in program history.

And with a 3-0 win over Greencastle-Antrim in the state semifinals at Northeastern York on Wednesday, the Freed’s Indians will see him off on the biggest stage in the Class 3A field.

With a senior class that’s been the first for the school to be in district contention all four years with over 60 wins in their careers, Freed is bringing his most experienced group forward to Cumberland Valley Friday, where Upper Perkiomen (25-0-1) will face reigning 4A champion Moon Area in the state final at 4 p.m.

“Those are unbelievable accomplishments. I’m just happy for them that they get the opportunity to be in the limelight,” Freed said. “You’re gonna be on TV, you couldn’t ask for a better ending than that for those kids.”

The win for Upper Perkiomen marks the ninth consecutive year in which the District 1 champion in the second-largest classification has reached the state final, dating back to Villa Joseph Marie in 2014.

Morgan Sweed met a ball sent over the middle from Sarah Straup and buried it in the open net with 1:37 left in the first half to take a 1-0 lead into the break.

The Indians were able to beat out Blue Devils (21-3-1) linebackers and create breakaway opportunities — often spearheaded by junior forward Sarah Fisher — but couldn’t finish at the net despite a 10-6 shot advantage through 40 minutes.

“If I’m being completely honest, it was more competitive because we played below standard,” Freed said. “We just weren’t connecting well, we missed some really good scoring opportunities that would have made life a lot easier on us, but the second half we got it there. This team is gonna stay resilient and keep plugging away.”

With 1:37 before halftime, Greencastle-Antrim’s goalie comes out to a loose ball, Sarah Straup nabs it and sends it across the middle.

Morgan Sweed meets it on the right and buried it to break the stalemate.

Tighter midfield play and a pair of daggers from Sara Edwards and Lauren Powers allowed Upper Perkiomen to add insurance and ride out the win.

During the 48th minute, Edwards nabbed a through-ball from Powers, carried out a breakaway and buried the ball to go up 2-0.

Fifteen minutes later, Powers once again found her senior forward and Edwards arched a shot from 20 yards out, the ball sailing into the top of the net through the outstretched arms of Greencastle-Antrim goalie Alexis Nelson (four saves).

“Lauren and I, we’ve played together for years and we’ve had moments like that where she just sends me a through-ball and I get to it,” Edwards said on her initial goal. “I just saw her looking up, I put my hand up, she saw me and the magic happened.”

63’ — Sara Edwards puts one top shelf on a pass from Lauren Powers.

The two have combined for two scores now.

Like Upper Perkiomen, the Blue Devils had never seen the state semifinals before Wednesday. And against an undefeated titan, a Greencastle-Antrim squad that’s navigated key injuries in the postseason met the challenge for much of the game.

“The town’s been behind us. Maybe it was a little too cold to get them out here tonight, but everybody’s been really supportive of this team and it was an exciting run,” Blue Devils coach Chris Noblit said.

Ava Long came up with five saves in net for the Indians. Upper Perkiomen outshot Greencastle-Antrim 14-10 on the night.

Win or lose Saturday, Freed’s era at Upper Perkiomen will be seen off with the most accomplished senior class the longtime coach has built up for the program.

“It’s crazy and it’s a blessing because it’s his last time and it’s my last time, along with a lot of our seniors,” Edwards said. “We’ve been playing together since we were babies and it’s just really special for everyone on the team.”