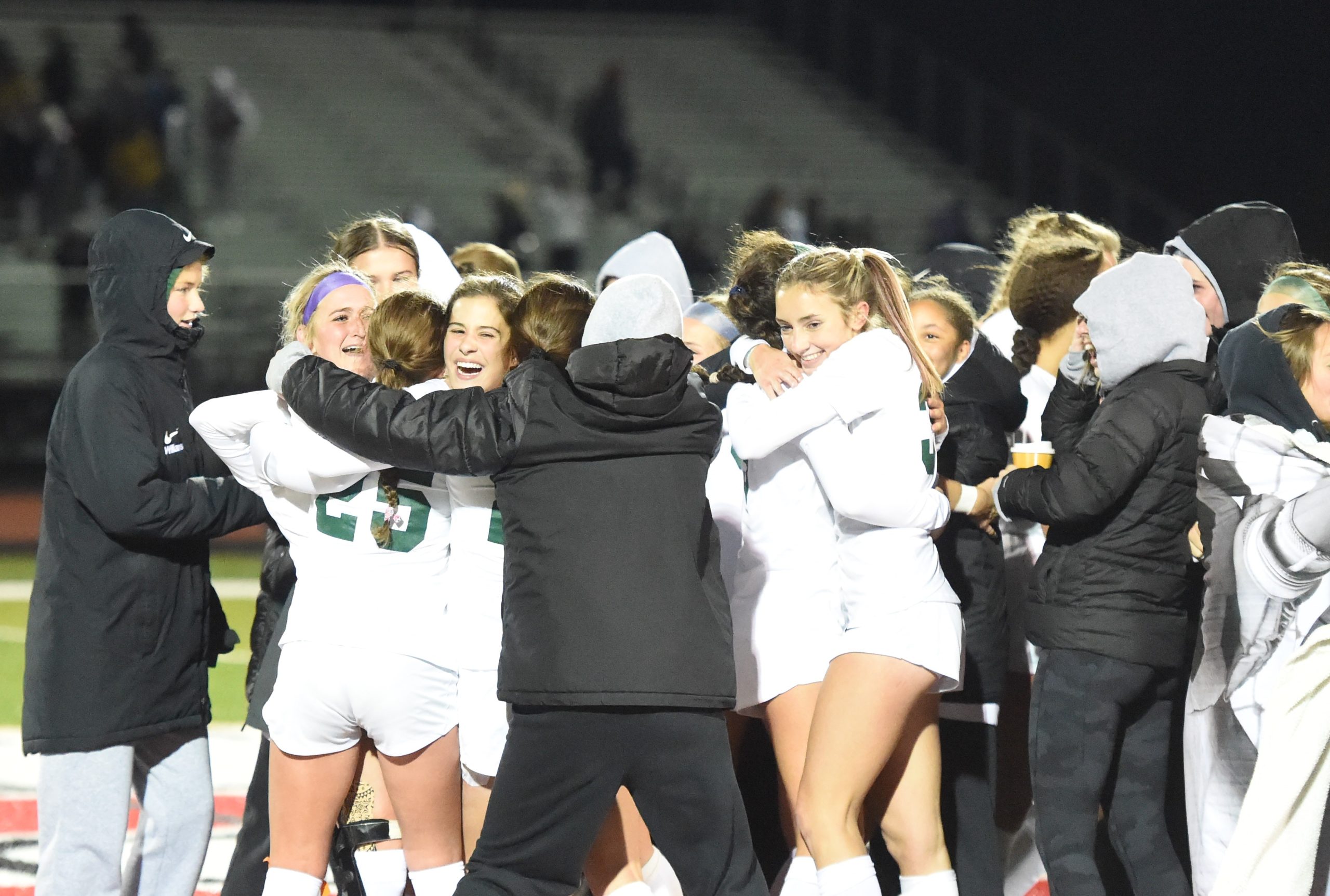 If there’s a ball that can be won, Pennridge players are expected to challenge for it. If the ball is lost, the Rams are expected to apply immediate pressure to get it back. At this point of the year, with the caliber of competition as sharp and as skilled as it is, a team that has players willing and able to fill a role and put the full effort in often finds a way into the margins that determine which side gets to play on.

Anna Croyle’s brace on a pair of scrappy goals and plenty of hard work and drive up and down the field led Pennridge past District 1 champion Neshaminy 2-0 in Wednesday’s PIAA 4A semifinals at Souderton.

“We played our game,” Joey Tomlinson, the lone Pennridge senior, said. “We didn’t fall into playing the way they wanted to play, we possessed the ball, we pressured and worked together.”

Pennridge (23-2-0) heads to its second PIAA final in the last three years, the Rams capturing the 2020 state title when most of the current team were freshmen and third since 2018. The Rams will face Central Dauphin, a 2-0 winner over Owen J. Roberts, in Saturday’s title match slated for a 4pm start at Cumberland Valley. Pennridge celebrates after a goal by Anna Croyle (40) in the first half against Neshaminy during their PIAA-4A semifinal on Wednesday, Nov. 16, 2022 at Souderton. (Mike Cabrey/MediaNews Group)

Neshaminy (23-1-2), which authored a splendid season that came with outright SOL Patriot titles and the program’s first District 1 championship since 2018, took its first loss of a fall one agonizing game short of a trip to the final. First-year head coach Josh Van Reed credited Pennridge for the win and also extolled the work of his team on Wednesday night and the season at large, handing special praise to the team’s 10 seniors.

“As they started rolling, we realized this was a team that could really do something special,” Van Reed said. “We have a lot of very, very good players and a lot of big moment players. They put a lot of work in during training and to get this far, that’s our only loss of the season, and if you’re going to lose it does stink to lose this game but hopefully a lot of the girls, the underclassmen, they’re hungry now, they learned what it takes to get here and it’s a big credit to our upperclassmen.”

Neshaminy was the only team to have beaten Pennridge in the regular season, edging the Rams 2-1 on Sept. 20, so the SOL Colonial champions knew an extra level of effort was needed. The Rams were already shuffling pieces before the tap, with Hannah Primwhere again filling in at center back for Lauren Murphy and Lindsey Balmer starting at fullback instead of forward. Pennridge’s Liv Grenda (36) gets up to head a ball against Neshaminy during their PIAA-4A semifinal on Wednesday, Nov. 16, 2022 at Souderton. (Mike Cabrey/MediaNews Group)

Casey Malone drew the unenviable task of keeping tabs on Neshaminy’s stellar sophomore Kylie Maxwell, who had seemingly been unstoppable throughout the postseason. Malone played an outstanding match at fullback, limiting the amount of opportunities Maxwell got while still finding a way to get forward and contribute to the attack.

Once Pennridge got settled, Meredith Blannett came in at the other fullback spot and pushed Balmer back to the front line. Ava Kiwak was strong in the holding spot of Pennridge’s midfield, coach Audrey Anderson noting one play where the junior went in for a tough header that many players would have shied away from.

“Our drive here has always been to outwork teams and pressure teams to force turnovers,” Anderson said. “Our forwards did an outstanding job tonight of putting their defenders under pressure and forcing them to maybe play bigger balls so Anna, Hannah, Ava could win those balls out of the air.” Pennridge’s Liv Grenda (36) and Neshaminy’s Carly Fox (4) vie for the ball during their PIAA-4A semifinal on Wednesday, Nov. 16, 2022 at Souderton. (Mike Cabrey/MediaNews Group)

Croyle’s main role with the Rams is to prevent goals as the anchor of the back line but the junior is a key piece of the team’s set pieces as a target player. While she’s scored a good amount of goals for a defender in three seasons, she’d never had a multi-goal game until Wednesday.

“Our offense did an amazing job pressuring and drawing fouls and in the box, everyone was aggressive, which opened up some gaps and I was in the right place at the right time I guess,” Croyle said. “When I get to go forward, I want to do everything I can to get it in the back of the net for my team and again, they did all the hard work so credit goes to them and I was lucky to be there.” Pennridge celebrates after a goal by Anna Croyle (40) in the first half against Neshaminy during their PIAA-4A semifinal on Wednesday, Nov. 16, 2022 at Souderton. (Mike Cabrey/MediaNews Group)

Neither of Croyle’s goals were particularly artistic, but all that mattered to her was that they counted. Both tallies were also an embodiment of the team’s mantra of outworking and outlasting, as each came off a second effort and following on a play.

“No one would have thought it would be our center back scoring both goals tonight and it’s amazing that as a team we can come together and no one is thinking ‘I wish it was me,'” junior midfielder Liv Grenda said. “I’m so beyond happy it was Anna who put it in, I would have been happy for anyone, but with how much we’ve been working on set pieces, she was there for us.

“We all felt it tonight, coming together as a team and pushing forward, it’s really brought us all together to push for the common goal.” Grenda, who battled all night against determined defending from Neshaminy holding midfielder Abby Collins, kept fighting to push forward and it was her determination to pursue the ball into the box that led to Pennridge’s opening goal. After a foul spotted the Rams a free kick, Malone drove a good service in that Grenda was able to get a foot to, prompting the keeper off her line for a save and rebound that Croyle was able to sweep into the back of the net with 17:57 left in the first half.

The goal came at the crest of a wave of pressure from Pennridge in the early stages of the game, with the Rams then building on that by putting a few more shots on goal and generating four corner kicks before the half expired. Just as notable was the fact that Neshaminy had not put a shot on goal in the first 40 minutes and wouldn’t get one until a few minutes into the second half.

“Playing for each other is something that really drives us and I think that makes us the team that’s able to go out there and work harder than anyone,” midfielder Sophie Craig said. Pennridge’s sixth corner kick led to fruition after an unusual sequence. Balmer’s service into the box led to a scramble and the ball popping up where Croyle crashed in to make contact and seemingly put it over the line. As she and several teammates raised their arms, the keeper batted the ball back into play and with no call from the official, Croyle recovered to hit the ball into the back of the net off her left foot.

“I just really wanted that second goal to give some comfort to our back line,” Croyle said.

Central Dauphin, the District 3 runner-up, poses a formidable challenge to be sure but Pennridge has been on a mission in the state tournament with a 14-0 aggregate on goals through three rounds. Croyle, Grenda, Malone and Craig were all key players for the 2020 team as freshmen and Tomlinson was a top reserve as a sophomore that year.

Still, that doesn’t mean they’re just happy to be going back on Saturday.

“Our motivation to keep going was knowing that we have something to prove,” Craig said. “It’s not about if a team’s better or not, it’s about who wants it more. It’s something we’ve been saying all season and I think we really proved it with our last two games in states.”