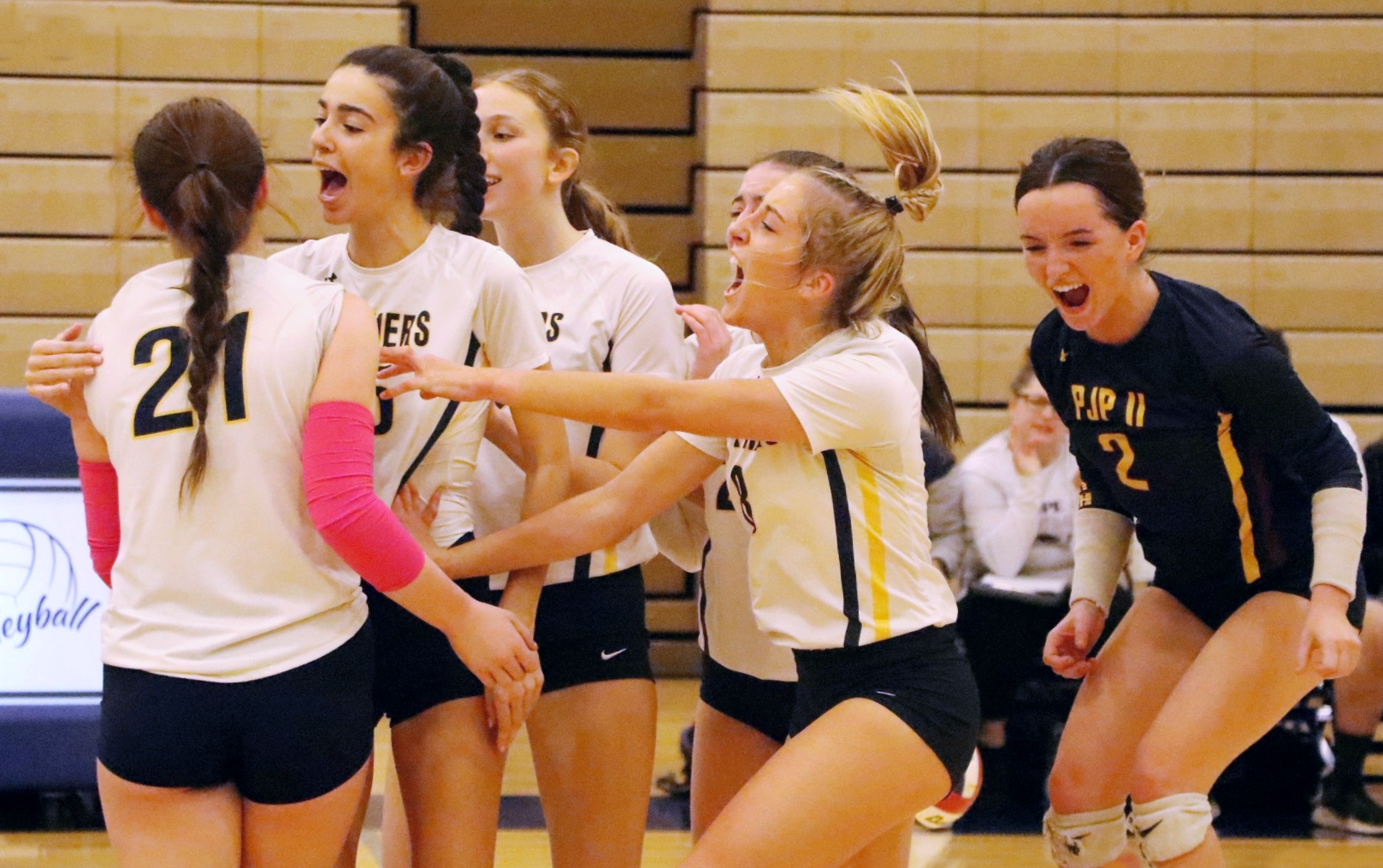 QUAKERTOWN >> The Ryan Sell era at Pope John Paul II has certainly been a fruitful one. And on Tuesday, the 10th-year coach reached a new height.

In the past, the Golden Panthers could never get over the hump in states. But with a sweep of District 11 champion Bethlehem Catholic (25-23, 25-18, 25-19) at Quakertown in the PIAA Class 3A semifinals — and the program’s first state semifinal appearance since 2012 — Pope John Paul II advanced to its first ever PIAA championship.

“I know our team has worked so hard to get here,” Pope John Paul II outside hitter Maeve Gallagher said. “Being a part of that legacy to just carry on and create history is such a big deal to all of us.”

PJP takes the third set, 25-19 for the sweep and will face the winner between North Catholic and Thomas Jefferson at Cumberland Valley High School at 3:30 p.m. Saturday.

Sweeps have been common for a Pope John Paul II squad that’s only dropped seven sets all year, but the Golden Panthers almost didn’t make it this point after surviving a five-set quarterfinal against Twin Valley.

The unfamiliar situation was a reality check that nothing comes easy at this point. And that check was brought to Bethlehem Catholic’s table.

“We definitely gained a new perspective,” Gallagher said. “Just seeing how we were challenged that much, we definitely wanted to challenge ourselves in practice after that and work as a team more often because I think after that last match we were working a bit individually and we struggled a lot. In this game, we worked well together and improved.” Hawks (18-6) senior Jodi Hewitt went out with a bang, unleashing a game-high 17 kills with 12 digs, one assist and a block in her final high school varsity match.

Both teams traded lengthy volleys with Vanessa Amrick (20 digs), Kyla Rodriquez (11 digs), Alice Frank (11 digs) and Olivia Harris (10 digs) splitting the workload defensively for Bethlehem Catholic throughout the night. Neither team scored more than six points in one run during the contest. And when one did, the other quickly climbed out of the ditch and made up the points.

“We watched a lot of film and strategized,” Gallagher said. “We knew they were a really good team so we just wanted to challenge them and challenge ourselves.”

How good is Bethlehem Catholic? Let’s take a look. Nine seniors for the Hawks won the state championship two years ago after navigating a haywire COVID-19 season. Last fall, Bethlehem Catholic reached the semifinals as well. And for good measure, the program has won a district crown the last three seasons.

“Getting here and not moving on, it does hurt. It’s gonna hurt for a little bit,” Hawks coach Kelly Brown said. “But we will definitely learn. Hopefully as the years progress, we keep getting to this point. Not many teams are as lucky.”

If that weren’t already a tall order for Pope John Paul II, key starting setter Madison Monahan was a game-time decision after getting hurt Saturday.

Monahan was able to play, but rather than the five-one the Golden Panthers often run, Monahan shared a six-two rotation with sophomore setter Reece Benner.

Benner filled her role efficiently with a team-high 21 assists. Monahan added 13 assists on the night as the two created opportunities for their hitters, particularly Gallagher and Ricevuto up front.

“We didn’t know how much she was gonna go. We didn’t know anything,” Sell said. “We discussed it, went back and forth. I probably didn’t make a decision until two minutes before I had to hand in the lineup that we were gonna do it.” After maintaining leads for much of the first two sets, Pope John Paul II fell into a ditch to start the final frame. The Hawks flew out to a 6-0 run before extending that lead, 9-2.

“They didn’t want to go home,” Brown said. “Obviously we started out very strong and that was their mentality towards the end of the game. Pope John Paul II just clawed all the way back … they just kind of overtook that set.”

The Golden Panthers found points in chunks of twos and threes before ultimately running away late. But it wasn’t just the scoring, as Pope John Paul II never allowed another run from Bethlehem Catholic after the latter scored its 12th point in the third set.

The Golden Panthers also avenged a state quarterfinal loss to the Hawks from the 2020 season. And with a star studded roster, Pope John Paul II has just one match left for all the marbles.

“This year, our team is a close knit team. We play as a team, we don’t really rely on one kid to do a lot of the work,” Sell said. “Our teams have been fairly balanced throughout the years, but I feel this one is just — I mean, we’re so close. I don’t know, we’re good at a lot of positions.”