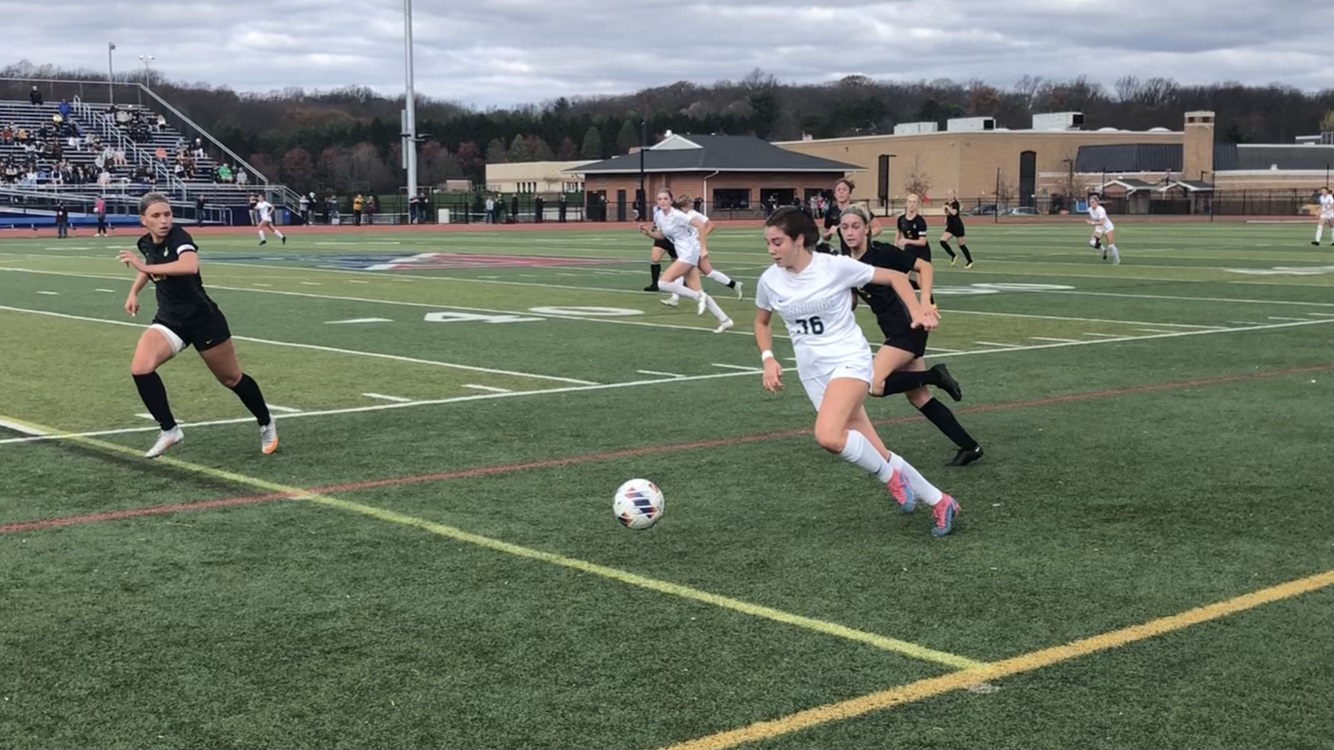 BUCKINGHAM >> Pennridge has scored a lot of goals this week.

The Rams, after dropping seven on District 12’s Central in the first round of the PIAA 4A girls soccer tournament, used a training session midweek for an inter-squad scrimmage where the goals kept coming. It seemed like a good omen going up against the only team that had shut them out this season in Saturday’s quarterfinals.

Pennridge’s goal-scoring form carried over as five different players found the net in a 5-0 win over Central Bucks West on Saturday, sending the Rams to their fourth semifinal in the last five years.

“Our team is really good at working together and knowing when we want to bring our outside backs or forwards up or keep them back,” Rams midfielder Liv Grenda said. “If I’m dribbling, if it’s any one of our backs or forwards, we’re always looking to support each other and work as a team and I think that makes the biggest difference between winning and losing.”

Grenda scored a key goal, converting a penalty kick with 40 seconds left in the first half that sent the Rams to the break leading 3-0. Three of the team’s five goals came from reserve players, including the first two of the game, which was another reason that mid-week scrimmage was so successful.

Pennridge is confident any player on the roster can step in and contribute. What coach Audrey Anderson saw on Wednesday was a desire to finish, something the Rams lacked in their District 1 quarterfinal shootout loss to West.

“The coaches came in feeling very confident if we came in and played like that, we’d be able to score,” Anderson said. “Jules (Broskey) is an incredible goalie so to score five goals on her was outstanding for us.”

In districts, Broskey was outstanding with 15 saves but the Rams also settled for some subpar shots. Saturday, there was a noticeable desire to get into the box and create quality chances.

“We were settling for low percentage shots and scoring opportunities and that’s not usually like us,” Anderson said. “We have one of the best dribblers in the state, if she gets into the 18, people are going to foul. That’s us in general, we want to penetrate into the box and give us the best chance to score.”

Pennridge had plenty of chances in the box thanks to Casey Malone. The junior fullback is outstanding getting forward and playing the ball into the box and she was not holding back against the Bucks.

Malone created the first two goals of the game by dribbling off the flank, cutting into the box and playing a ball into the six.

On the first, Jessie Moylan pursued a deflection and tucked in a solid, composed finish midway through the first half. Four minutes later, on a similar play, Malone sliced her way in and slipped a through ball into the path of Hailey Primwhere, who took it the rest of the way for a neat finish.

“I was looking to dribble, keep my touch close and go with pace,” Malone said. “I knew I could find my forwards because they were always making runs. I just had to determine if I should cross around, take a shot or find them, it’s usually one of those three things I’m trying to do.”

The loss ended a tremendous postseason run for the Bucks. West entered the district playoffs as the No. 26 seed and put together a memorable run that saw appearances in the district semifinals and the state’s final eight.

What made the run so special was the resiliency West showed, with numerous key players battling through injury. The Bucks knew it was a tall task facing the Rams for a fourth time but they battled to the end.

“Our defense, Ava Longo and Courtney Moylan, have held it down for four years and Jules has been incredible this whole run,” West assistant coach Victoria Bremer said. “I’m proud of them and proud of the effort from everyone on the field today.”

Grenda’s goal was key but the major turning point of the first half came a few minutes prior. A foul on Pennridge spotted West a free kick in a good area and Moylan delivered a great ball into the box.

A chaotic sequence followed with the Bucks getting at least two, if not three, chances to score. Anna Croyle, Meredith Blannett and keeper Seretha DeMoss somehow managed to keep the ball from crossing the line and preserved the 2-0 lead.

“That was huge, obviously if they score a goal, they get all the momentum,” Croyle said. “Being able to clear that was awesome, Meredith came up huge, she’s done so well filling all the roles we need her to and to get that save was amazing.”

Grenda did what she does, opting to keep a ball alive on the endline and drove into the box where she was taken down for a penalty kick.

“Everyone always says 2-0 is the most dangerous score and going into halftime when a team can relax and recuperate and get back into it, that third goal made us feel more confident,” Grenda said. “It was a great way for us to go into halftime with the momentum.”

West knew it had a difficult job trying to climb back but the team built on grit wasn’t giving up.

“It’s crazy, no one thought we’d be here,” Longo said. “It was a good run, we have something to be proud of even though we lost today.”

Joey Tomlinson made it 4-0 with a fantastic hit off an assist by Sophie Craig with 25 minutes to go.

With the exception of the PK, every Rams goal was also assisted. Pennridge capped the scoring late when Kate Brashear crashed the goal and one-touched in a nice cross by Caitlyn Peace.

“You have to want it,” Malone said. “Anyone can say they’re going to dribble or do all these other things but it takes a lot of work to get in there and it’s super-hard to go through a good team like West. That’s why it’s so important to have those other players make the runs for you.”

Pennridge will face Neshaminy, a 2-1 overtime winner against Conestoga, in Tuesday’s semifinals. Neshaminy topped the Rams 2-1 during the regular season.

“I’m so excited for that,” Grenda said. “I was excited to see West won their first game and we had another shot at them and I want another shot at Neshaminy. It was a good game the first time we played them.”

Pennridge gives its all for Valimont, bows out to Lower Merion in PIAA-4A quarterfinals
Big 2nd half for Martin, Springfield-Montco in PIAA-3A quarterfinal win over Selinsgrove