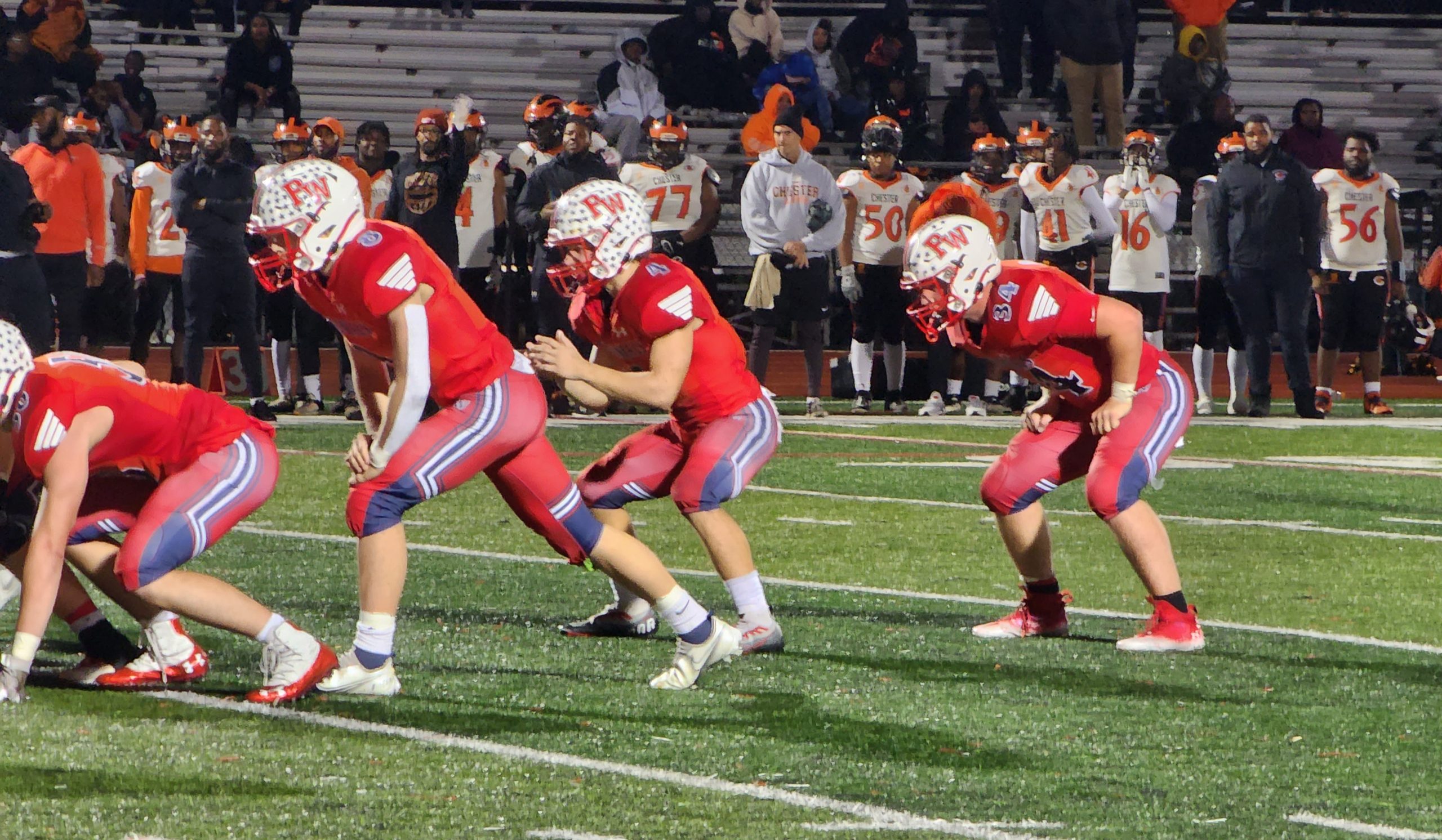 WHITEMARSH >> Plymouth Whitemarsh’s defense faced arguably its toughest test of the season in the District 1-5A quarterfinals Friday night. The Colonials were matched up with Chester, a team averaging 37.2 points per game through 11 games.

When the grades came back, PW passed the test with flying colors.

The fourth-seeded Colonials held the fifth-seeded Clippers to their lowest point total of the season, grabbed two interceptions and recovered a fumble in a 30-12 win at Plymouth Whitemarsh High School.

The Plymouth Whitemarsh (10-2) defense really made its mark on the game on fourth downs. Chester went for five fourth downs in the game and converted none of them. The turnover on downs resulted in two short-field touchdowns for the Colonials, extending a four-point lead to 10 in the third quarter and a 10-point lead to 17 in the fourth.

“We knew that they were going to try to throw it,” PW senior linebacker and running back Tommy Hannon said of the fourth-down stops. “We tried to keep him in the pocket. We just knew the sticks and we thought come up and make the play. Other than that, just cover our guys.”

One stop stood above the others in terms of swinging the momentum of the game. Chester (10-2) got the ball to start the third quarter after a 9-play, 78-yard touchdown drive got the Clippers within 10-6 late in the first half. On 3rd-and-7 at the PW 41, Chester dropped a sure touchdown that would have given the visitors their first lead of the game. Instead, they tried a trick play on fourth down and PW’s Thomas Montemayor and Joey Foy stopped it for no gain.

The ensuing possession was a 12-play, 59-yard touchdown drive for the Colonials to take a 16-6 lead. They ran the ball 11 times, including the final 10 plays. Hannon accounted for six rushes and 22 yards, including a 4th-and-1 conversion and the touchdown from one yard away.

“The o-line did a great job all night,” PW quarterback Aiden O’Brien said. “We were able to get the blocks, get four or five yards at a time, get those long drives. That was huge. Our o-line, they’re well-conditioned. They keep going. They’re some dogs.”

“They caught us on one there,” Chang said of Chester’s third down drop. “We got away with one, but our guys were resilient… I thought our offensive line really dominated the game tonight up front. We were wearing them down I thought, getting chunks at a time. Tommy Hannon ran the ball hard, Aiden ran hard. I was very happy with that.”

Chester went for fourth down again on the next possession. After getting out of a 1st-and-38 hole, the Clippers faced a 4th-and-9 at their own 37. Foy and Zach Smith wrapped up Clippers quarterback Jalen Harris and the whistles were blown before he got the ball off for a turnover on downs.

Four plays later, Hannon was celebrating a six-yard touchdown run and 23-6 lead with 10 minutes left in the game.

The Colonials defense also had fourth-down stops when Nazye Boggs, Greg Feinberg and Foy combined for a stop in the first quarter, Seve Spruill broke up a pass in the fourth and O’Brien grabbed an interception in the fourth.

PW took a 7-0 lead on the first drive of the game. Boggs finished the 11-play possession with a nine-yard run to get the scoring started.

Spruill made it 10-0 with a 28-yard field goal in the second quarter.

Chester got within four at half when Harris found Aqeel Austin for a nine-yard touchdown with 20 seconds left before the break.

Hannon’s two touchdowns after fourth-down stops made it 23-6. Chester returned a fumble for a score to make it 23-12, but Hannon added another touchdown to put the Colonials ahead 30-12 with 3:43 left in the game.

PW will face No. 1 Upper Dublin in the semifinals next Friday.

Dominant second half powers Rustin to district semifinals
Pennridge gives its all for Valimont, bows out to Lower Merion in PIAA-4A quarterfinals