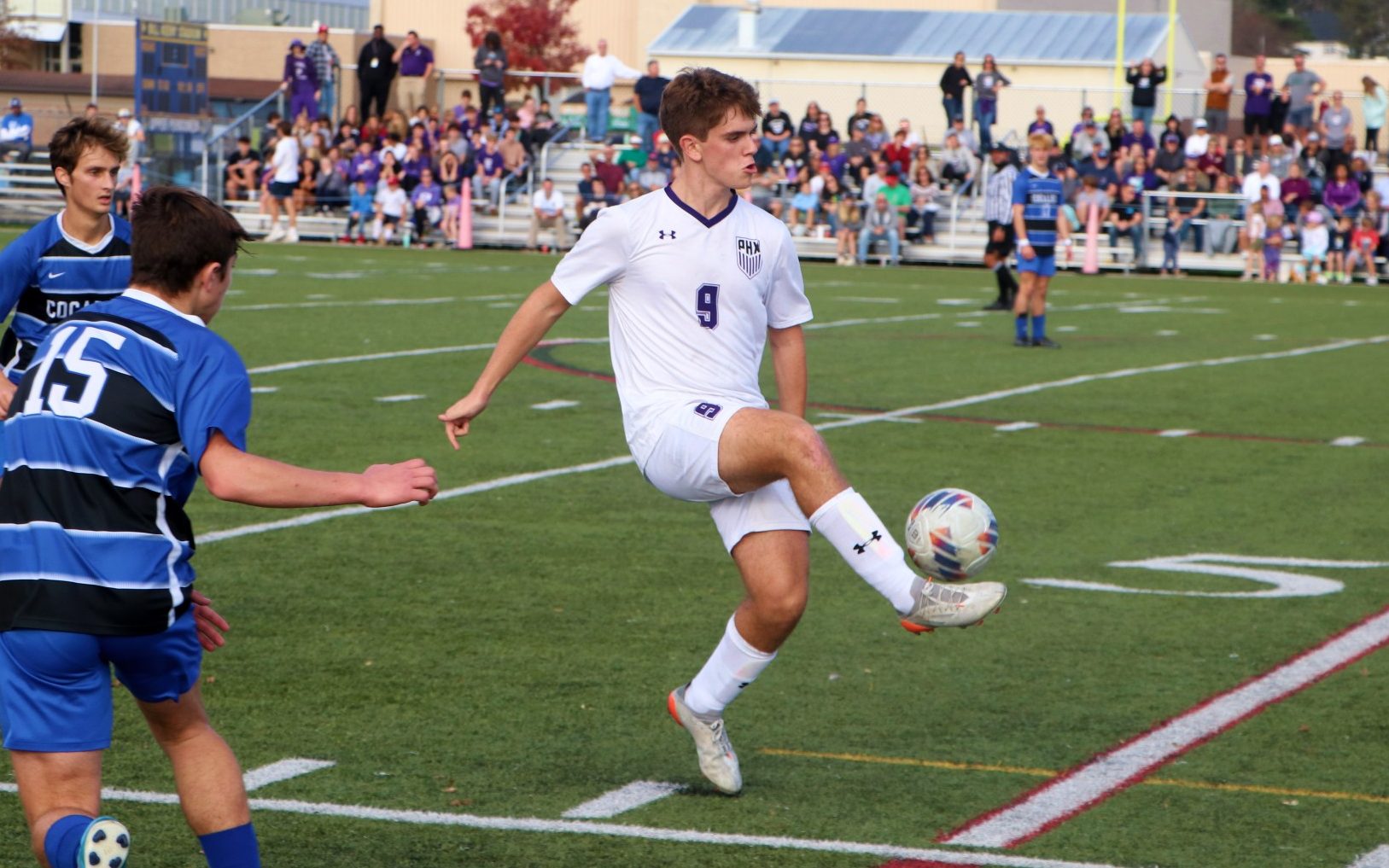 PENNSBURG >> Cocalico and Phoenixville were in the same boat, though the vessel was only small enough for one.

District 1 and 3 runner-ups respectively, both squads had never made the state tournament before this season, let alone win a game. With both looking for their second state win, one would have to close shop and pack up after making its furthest run.

Behind a hat trick and two assists from Efe Ulcay, it most certainly wasn’t the Phantoms. Phoenixville won, 5-1 over the Eagles in the PIAA Class 3A quarterfinals at Upper Perkiomen on Saturday.

With the win, the Phantoms (20-3-1) will take on Springfield Township – a 3-0 quarterfinal winner over District 4 champ Selinsgrove – in a District 1 final rematch on Tuesday in the program’s first state semifinal game in school history.

“It’s big. We had huge support on our way out here, got huge support in the game and when we get back,” Ulcay said. “It’s deserved with this special group of guys.”

Phoenixville’s win also marks one of the top three Pioneer Athletic Conference team finishes in states, matched by Boyertown in 2019 and Pottsgrove in 2008.

Phantoms coach Michael Cesarski credited the deep run for his program to a more competitive-than-usual PAC regular season, building up the team to withstand tougher opponents down the road.

“I think this year’s been a good year for the PAC overall. It’s probably been the most competitive year up and down,” Cesarski said. “Typically you have that big school side and the small school side, and this year, everybody’s been taking wins and points off each other. Maybe that’s indicative of the quality being much more evenly distributed.”

Ulcay’s first goal came with the help of CJ Jahn as the two worked their way around the Cocalico (19-6) back line in the 23rd minute. Jahn poked the ball between a defender’s legs, where it met Ulcay, the latter banking a shot to go up 2-0 and ride that cushion into the half.

CJ Jahn and Efe Ulcay find separation and beak around the Eagles’ back line, Ulcay puts it away to take a two-goal lead.

Ulcay has played a hand in both scores.

Seven minutes after the break, Ulcay was fed a ball from Ricky Kaniewski and buried it past Aaron Wilczek (four saves) to extend the Phantoms’ lead by three goals. With 19:29 left in the game, Ulcay capped Phoenixville’s scoring by chasing down a loose ball and putting it away unassisted for a 5-0 advantage.

“We came out way more energized than we did the Archbishop Ryan game,” Ulcay said, noting Phoenixville’s state first-round win in penalty kicks just four days prior. “I don’t think we played our best game the Ryan game but we knew that and we’re fortunate to be here and it’s deserved at the same time.

“I think now that we realized we’re in the quarterfinals, everybody has the same mindset to put our best foot forward and play our hardest.”

Kaniewski put the Phantoms on the board initially during the 16th minute. Ulcay sent him a pass, which was blasted to the far side and into the left corner of the net.

16’ — Ricky Kaniewski nets one on a far side shot off a feed from Efe Ulcay.

From there, Phoenixville never looked back and held a 9-4 shots-on-goal advantage through the remainder of the contest.

“Keeping it at (2-0) was really, really important. I felt if we could keep it at two, we could give ourselves a chance to win,” Eagles coach Derek Sipe said. “The first six, seven minutes of the (second) half I thought we played really good soccer with throws and corner kicks and weren’t able to finish. It gets to their end of the field one time and they’re able to finish a ball. That third goal was a little deflating.”

Cocalico was held to no shots on goal through the first 40 minutes before creating more opportunities in the second half. The Eagles finished with six corner kicks, twice the amount Phoenixville had all afternoon.

The lone goal from Cocalico came from a cleanup job by Talon Popolis on a setup from Shamanuel Dominique in the 63rd minute with Ryan Lang rotated in net for Jason O’Neill (three saves).

“We definitely had our moments where our defending wasn’t where we wanted it to be,” Cesarski said. “But I think we really defensively set up a lot more soundly over our playoff run. And we’ve just been much more difficult to score against.”

Ulcay registered a second assist with 28:06 to go in the game. On the heels of senior captain Matt Laudenslager being issued a yellow card for the Eagles, Ulcay drove the ball to Nate Stewart, who immediately found the back of the net.

Still, Cocalico’s sideline was all smiles as the time dwindled down and the sun began to dip by the treeline. A standing ovation was given to its seniors as they came off the field for the last time with 3:14 to go.

Afterward, they gathered before a crowd of blue in the bleachers to have their deepest run — and varsity careers — seen off with the rest of the Eagles’ season.

“I think you get to that point in a game when you know it’s kinda gotten away from you, the result is going to be what it is where you start thinking of other things,” Sipe said. “What the seniors were able to accomplish for us, not just this year but throughout their careers … you want to do something to recognize that. In soccer, you can only do so much on the big field.”

Perkiomen Valley into district semis with win over Souderton
Strong-finishing ‘Stoga notches another shutout; moves on to PIAA Semis