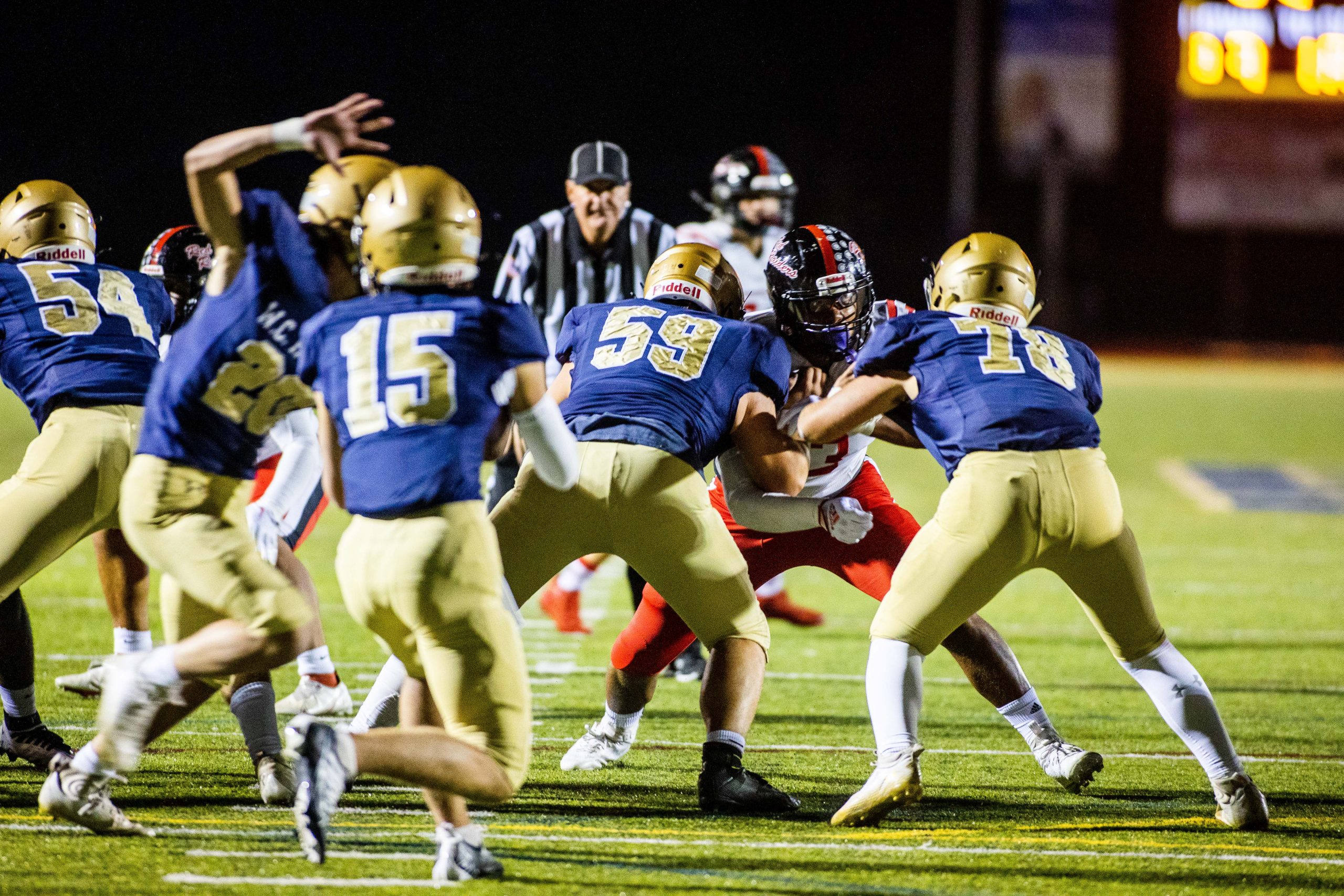 WESTTOWN >> If West Chester Rustin’s second half wasn’t its best half of football this season, it won’t take you long to put it on the list.

The Golden Knights thoroughly dominated Kennett, scoring three touchdowns in the final 24 minutes en route to a 31-7 victory in the District 1 Class 5A quarterfinals Friday.

The third-seeded Golden Knights (10-1) will face the winner of today’s Strath Haven-Springfield (Delco) contest in the semifinals next Friday.

Rustin had revenge on its mind after losing to the Blue Demons, 24-14, earlier in the season. Kennett went on to claim the Ches-Mont League American Division championship.

“We got the rematch we wanted,” said Rustin running back Daimon Jacobs. “We had a good week of practice and the o-line did a great job of blocking.”

Rustin coach Mike St. Clair talks often about having a stable of three good running backs, and they came to the fore on Friday. Jacobs (121 yards), Chase Hatton (87 yards) and Antonio Santangelo (141 yards) combined for 349 of Rustin’s 408 yards on the ground.

“Rustin came out with a chip on its shoulder tonight,” said Kennett coach Lance Frazier. “We got them in the regular season. We knew they would be fired up. They were very strong at the end of the season, playing their brand of football. So, we knew it was going to be a tough one. They just made more plays than we did.”

The two run-oriented, ball-control teams lived up to billing in a quick-moving first quarter. Kennett took the opening kickoff on its own 20 yard line and drove down to the Rustin 32, fueled by a 21-yard pass from Brett Kauffman to Colin Jung. However, on first-and-10, Kauffman lofted a pass into the end zone that was intercepted by Jacobs to give Rustin the ball.

The Knights launched a drive of their own that methodically went 13 plays and bogged down on the Kennett 4. Griffin Strunk booted a 21-yard field goal for a 3-0 lead.

In the second, Kennett got a break after Josh Barlow blocked a punt and took over on the Rustin 6. But, three plays lost 10 yards and the Blue Demons lined up for the tying field goal. Instead, holder Barlow quickly threw to a forgotten wide-open Ian Guyer for the go-ahead touchdown.

Rustin came right back with a little trickery of its own. Nelson Murray took a reverse and sped 50 yards to the Kennett 30. Two plays later, QB David McClain found Jeremy Lynn alone in the right corner of the end zone for an 8-yard score and a 10-7 lead at halftime.

In the third quarter, Jacobs scored two consecutive times he touched the ball. He broke off left end for a 15-yard score and a 17-7 lead. Then he followed that on Rustin’s next possession by bursting through the middle to speed to a 28-yard TD and a commanding 24-7 advantage.

The dagger came in the fourth as Hatton broke two tackles to power 33 yards for the score that provided the final 31-7 margin.

The Golden Knights defense proved stout as they kept Julian Sparacino in check with 92 yards on 20 carries. They held the Blue Demons to 163 yards of total offense.

Kennett’s season ended at 8-4 and Frazier spoke about the campaign they had.

“What we’ve overcome, it’s always going to be a story of numbers,” he said. “For us to be on the smaller size in terms of numbers and win a conference championship, our guys worked hard and got what they deserved. We’re very happy with the guys, very happy with our senior group, great leaders.”