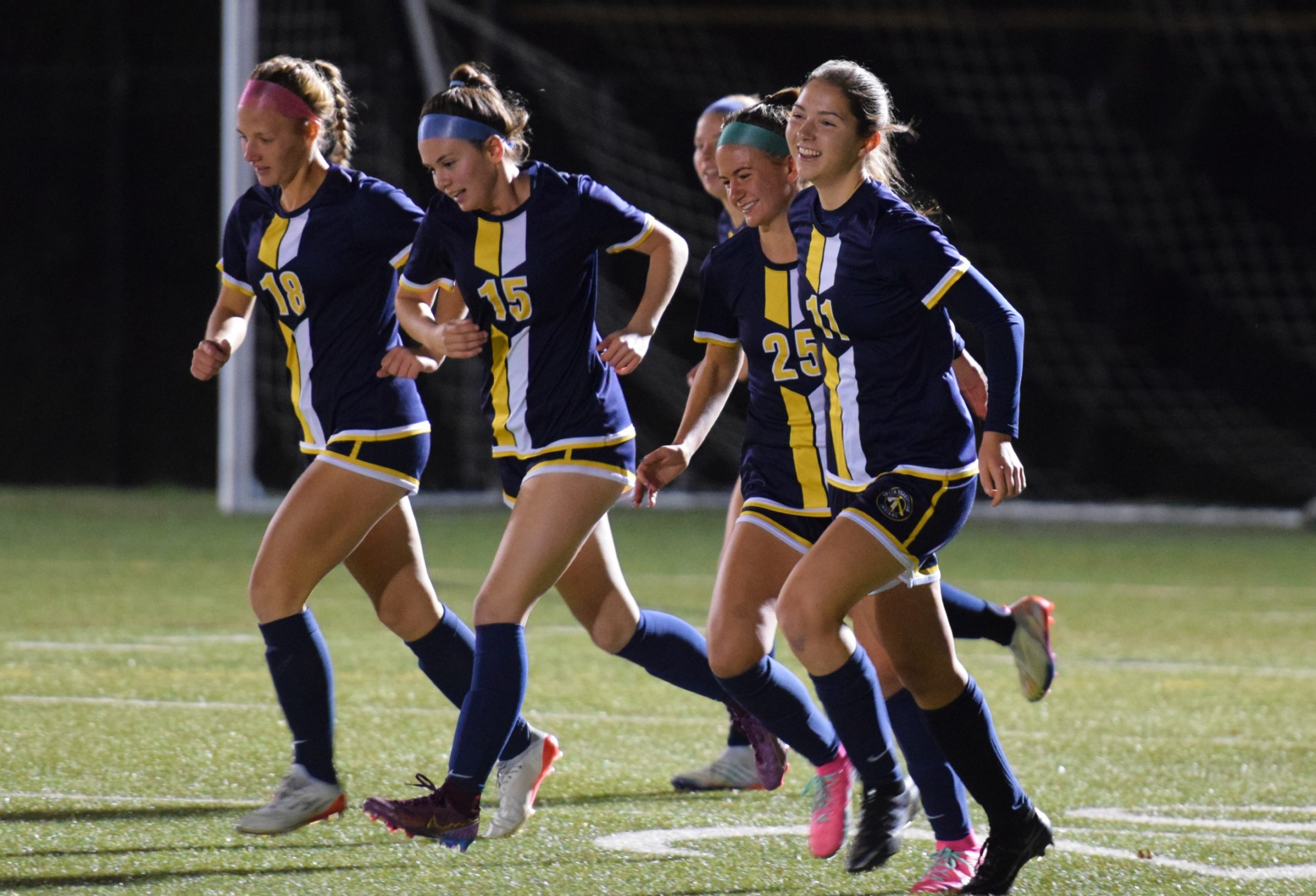 Upper Perkiomen celebrates after Lauren Powers, right, scored a goal in the first half against Northern York in a PIAA 3A first round game Tuesday. (Austin Hertzog - MediaNews Group)

But Erin and Sara Edwards enjoy the next-best thing: a lifetime of knowing each other’s games.

It paid off on the Indians’ opening goal Tuesday night that catapulted District 1 champion Upper Perkiomen to a 3-1 victory over District 3’s Northern York in a PIAA Class 3A first round contest.

Despite it being their first state playoff win in program history, the unbeaten Indians (23-0-1) have gotten very used to winning this fall.

“They weren’t piling all over each other (after the win). They set incredibly high expectations for themselves in the beginning of the year and their minimum goal for the year was to win districts,” said UP head coach Mike Freed. “They’ve gotten to this point and now we’re going to take this ride as far as we possibly can.”

Next up is a quarterfinal meeting with District 2’s Valley View – a 1-0 winner over Shikellamy on Tuesday – on Saturday at a time and place to be determined.

Upper Perk scored on a pair of headed goals from senior center back Lauren Powers and junior forward Sarah Fisher in a 3:19 span in the first half, each set up by the Edwards sisters.

The opener began when Sara Edwards’ long free kick struck Northern’s wall and rebounded right back to the 30-goal forward. Instead of going again, she sent the ball out wide for sister Erin at right back, who took a touch forward to play a big cross met by Powers.

“I was gonna play her at first, but I didn’t think you were ready,” Sara said to Erin. “I’m glad it hit the wall, so then it worked out.”

Erin Edwards had the same thought, just looked to Sara at a different time. That was among the few missed connections Upper Perk experienced in the first half Tuesday.

Sara Edwards worked for space by the end line after a throw-in and lofted a cross met and looped in by Fisher for a 2-0 lead at the 26:17 mark of the first 40.

“Club ball, four years of high school ball, they just know where to place the ball for each other,” said Freed. “I’m not lying when I tell you we spend a minimal amount of time on set pieces. They always have a license to improvise.”

Seventeen minutes later, Fisher returned the favor by slipping in Sara Edwards on an unmarked run through the defense for a one-time finish and 3-0 lead.

“I wasn’t surprised,” Sara Edwards said of the early lead, “but we had to keep going because they were a really good team. They’re all going to be good teams now so we have to keep working hard.”

Northern York (19-3-1), which suffered its second loss in the district semifinals against eventual champ Lower Dauphin but entered states off a seeding win over Twin Valley, had its hands full with the potent Upper Perk attack and midfield, but acquitted itself well in the final 40 minutes, earning a consolation goal from junior forward Liv Goretski. She was the primary outlet for a Polar Bears team that played a quality brand of soccer and only featured one senior in the starting lineup.

Liv Goretski sorts the ball well at her feet after free kick and gets Northern on the board. 3-1 Upper perk, 25:13 2H pic.twitter.com/NwQPWVDLpg

It gave Northern York a big spark with 25 minutes remaining, but it couldn’t generate quality scoring chances the rest of the way despite pressuring the Indians into a disjointed second half.

“It was stressful, but I have faith in all my defenders (Powers, Elyse Kreiner, Elizabeth Proctor) and Kyra (Lesko) and Megan (Cairns) and Mary Kate (Sitko),” said Erin Edwards. “I just trust everyone. We just have to keep working hard.”

For all its success and last Thursday winning its first District 1 championship, 1-0 over Bishop Shanahan, the Indians were treating it as a fresh start.

“At this stage, everyone starts 0-0. The team that ends up 4-0 from here wins the state. One down, three to go was the mentality,” said Freed. “But it’s kids that have been, especially at the club level, playing in these big spots. You put them under the bright lights of this kind of moment and they’re not shying away.”

Upper Perk has no illusions about the road ahead, but it sounds ready to meet what comes head on.

“The goal is just to keep working hard, be consistent. The teams are going to get harder but I like a challenge,” said Sara Edwards.