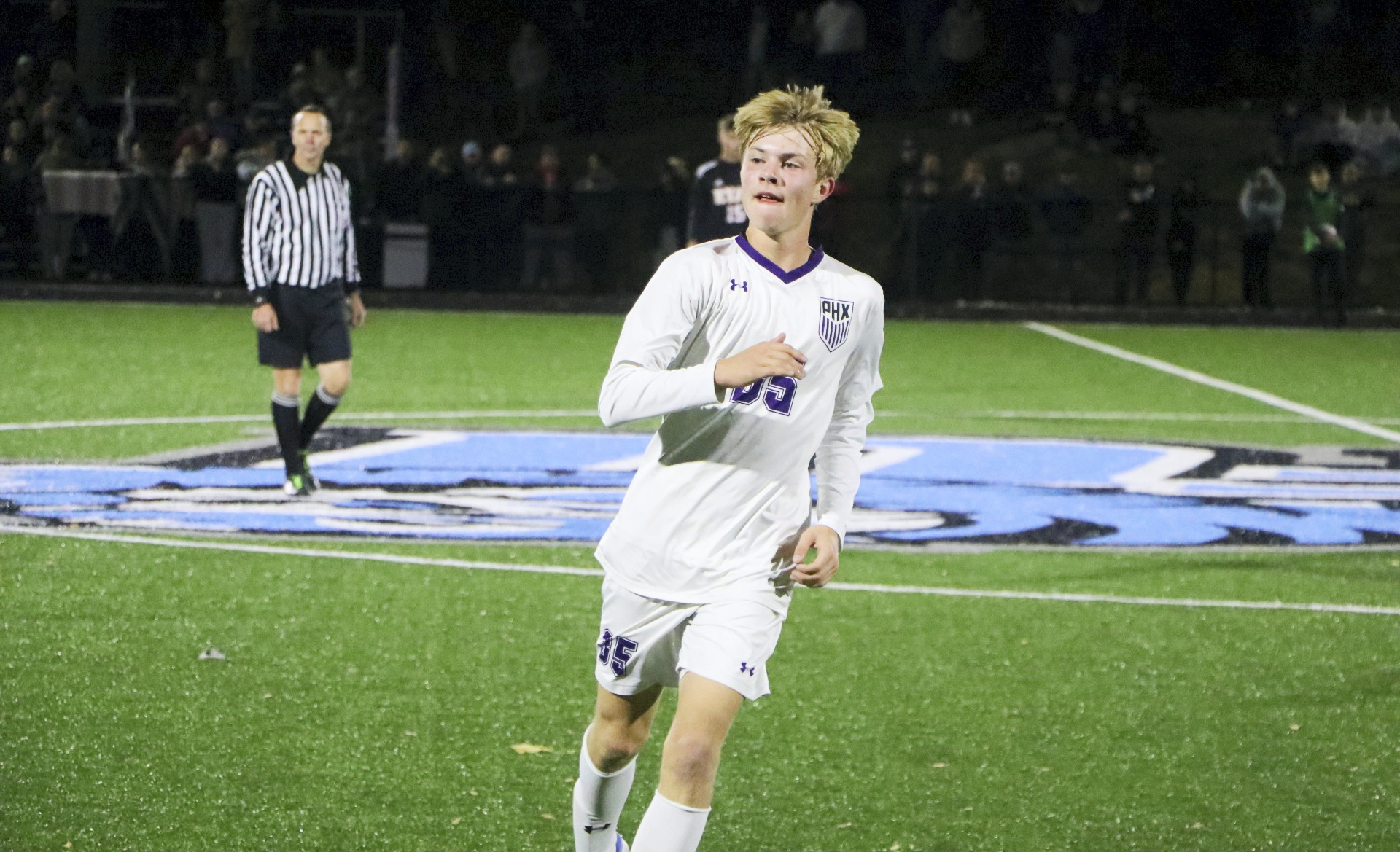 Phoenixville midfielder Jack Illig looks on at the sideline after a whistle during the first round of the PIAA Class 3A boys soccer tournament at Holy Family University's Tiger Field Tuesday. (Evan Wheaton - MediaNews Group)

Before 2022, the Phantoms never had Jack Illig.

“It’s a very crazy atmosphere,” Illig said. “And crazy teammates push me up after every time I fall.”

Phoenixville’s first ever state playoff game will be a memorable one.

Phantoms take it 4-2 in PKs over Archbishop Ryan and will take the winner between Tunkhannock and Cocalico.

What an insane night. pic.twitter.com/6FEE6UkDXq

After finishing regulation and extra time tied 2-2, Nate Stewart and Efe Ulcay put the Phantoms (19-3-1) up 2-0 in penalty kicks after the first two shots for Archbishop Ryan (14-6-2) banged off the post and sailed up wide-right. From there, Peyton Barton put the Raiders on the board and Ricky Kaniewski matched him.

Frankie Monaco scored the second PK for Archbishop Ryan, but with two missed prior, Evan DesMarias’ kick was enough to ice it for Phoenixville.

With the win, Phoenixville will take on Cocalico Saturday at a time TBD.

“It’s awesome, especially for the seniors,” Illig said. “We’re crazy about the seniors. It’s their last ride, so it’s memorable.” Down 1-0 with 12:35 left before halftime, Illig’s first goal came off a feed from Connor Northcott. With a minute left before the break, Roy Hevener sent a pass over the middle to Jarrett Lalli, who drilled the ball into the top of the net to reclaim a 2-1 Ryan advantage.

Things looked bleak for the Phantoms. Archbishop Ryan was playing a solid back line, keeping possession and not letting anything up.

But with just 3:28 left in regulation, Illig found a ball from the foot of Kaniewski, met it in the air and side-kicked it top-shelf to force the overtime period.

“He had a special night,” Archbishop Ryan coach Ryan Haney said on Illig. “I knew about (Ulcay), I knew about (Stewart) and I watched film and saw them play. I kind of recognized him as the third, and he had a really good night. We talked about all three of them and (Illig) being the next guy coming up through their midfield.”

During the 26th minute, Monaco put a well-placed throw-in to the left of Phoenixville’s net and Hunter Bark tucked it in to give the Raiders their initial lead.

39’ — Roy Hevener sends one over the middle to Jarrett Lalli, Lalli drills it.

Archbishop Ryan won its first Philadelphia Catholic League title in 19 years, having defeated Father Judge in the title game before claiming the District 12 title as well. Phoenixville went undefeated in the Pioneer Athletic Conference during the regular season before falling in the semifinals and becoming the District 1 runner-up.

Both teams pieced together worthy campaigns to lead up to an epic clash on Tiger Field. And both teams played with the hunger to keep the show going.

“We had a ton of chances. I just think that our connection through the midfield was on, we were able to create opportunities,” Haney said. “Credit to the goalie, he made some saves. There was one on the goal line where I thought, ‘How did we miss that one?’”

The first overtime period was entirely lopsided. Archbishop Ryan pelted Phoenixville’s back line with direct kicks and corners while creating solid looks with its forwards as well.

Still, the Phantoms bent but didn’t break, showing more aggressiveness offensively in the second overtime period before taking the draw into penalty kicks.

“It’s just like work. If everyone shows up, does their job, you get the mission accomplished efficiently. I think the back line did that in the first half of the overtime,” said Phoenixville goalie Jason O’Neill, taking a moment to collect his thoughts after the penalty kicks. “We just stuck through it. Everyone put their minds to it with whatever energy they had.”

O’Neill’s brother, Cole, was a graduate of 2019 but never enjoyed as much success as the now-state quarterfinalists.

“Now I like to get in his face and say I’m better than him,” O’Neill said. “We’ve been in this position before, we know how the other team feels. Winning by PKs isn’t a great loss, but we just have to keep on going and play our game.”

The Phantoms’ roster has a wealth of veterancy. Of its 27 players rostered, 17 of them are seniors.

Like O’Neill said, those seniors have been on the other ends of PKs and have gained a wide variety of experience over the years to help drive the program forward. Upperclassmen who didn’t get rattled on either lead change, but dialed in and focused on matching it one at a time.

“We have a lot of experience, which helps. We have a lot of seniors who really stepped up, and we also have some seniors who have taken a little bit more of a backseat role,” Phoenixville coach Michael Cesarski said. “The first concern for everybody is a singular focus, the team being successful.”

The Phantoms are loaded with really good seniors. And, of course, its freshman isn’t too shabby either.