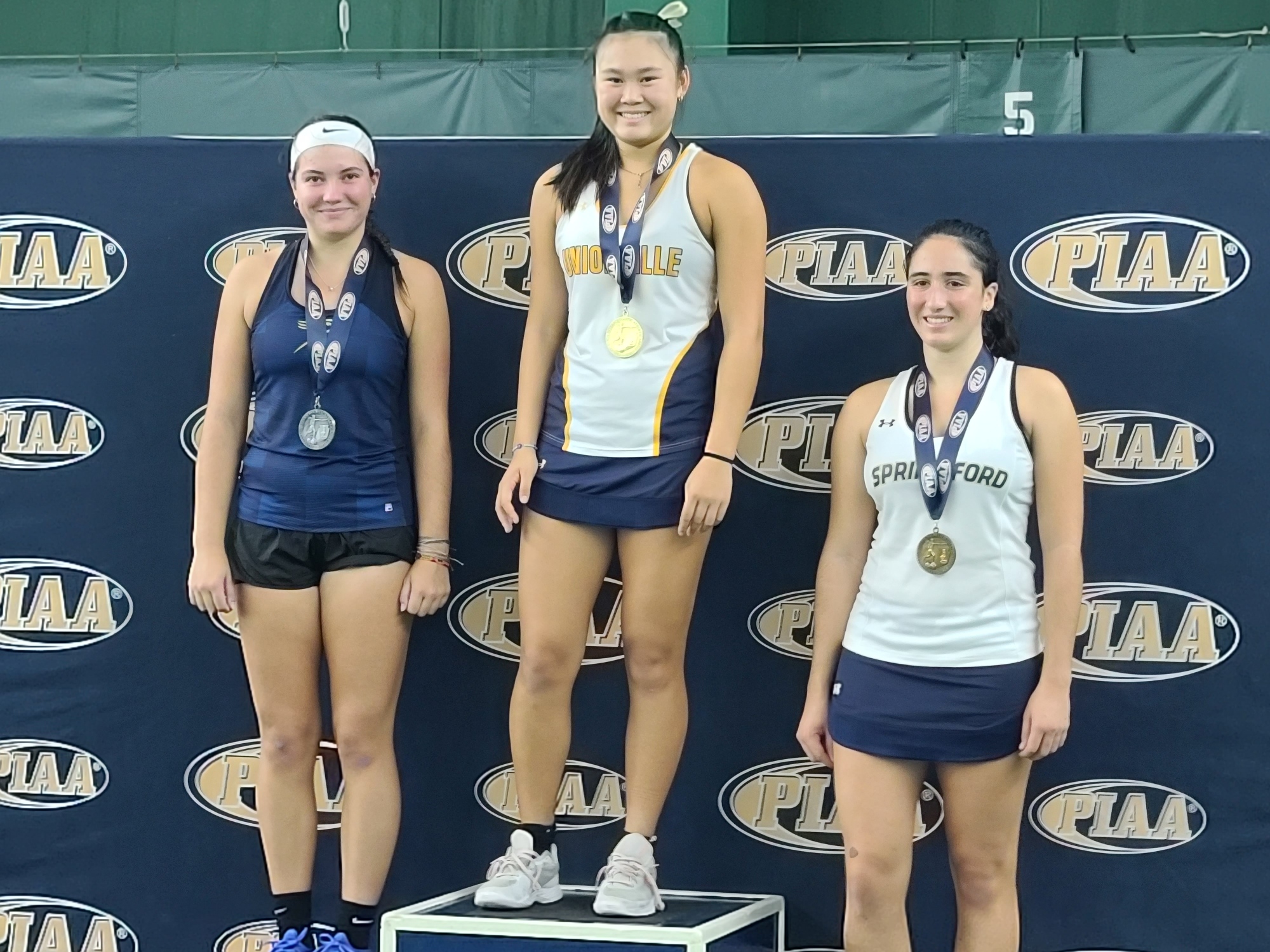 Unionville High School junior Grace Li completed an undefeated girls tennis season by capturing the PIAA 3A singles tournament title Saturday afternoon at the Hershey Racquet Club.
Li won all four of her tournament matches in straight sets. In the championship final, she defeated Council Rock South junior Dasha Chichkina, 6-4, 6-2. Earlier this season, Li defeated Chichkina in the District 1 3A championship final, 7-5, 6-0.
“I knew it was going to be difficult, because Dasha played so well in the district final, and again today,” said Li. “She’s really fast, and gets to every ball. I just tried to play my game – be consistent and aggressive.”
In the first set of the championship final Saturday, the score was tied 4-4 before Li went ahead for good.
“Once I went ahead 5-4, I found it easier to hold serve,” said Li.
Last year, Li finished second in the state tournament, losing to North Penn junior Esha Velaga, 6-3, 6-3. Li had finished second to Velaga in the district final, and was later named the 2021 Daily Local News Girls Tennis Player of the Year.
“This year in the (state) championship final, it was more nerve-racking because as the No. 1 seed I was expected to win,” said Li. “In the beginning of the first set I shanked a couple (laughs) but I breathed through (the stress) and didn’t allow myself to think of all the people up in the stands watching.”
Li’s favorite memory of Saturday’s championship final was the support she received from her Unionville teammates and friends at Hershey.
“It was great seeing my teammates and friends who drove up to Hershey to see the match,” said Li. “It meant so much to me.
“I was so happy after the final shot. I’ve been on both sides (in the state championship final) and it was a really memorable experience today.”
Unionville girls tennis head coach Janet Johnston said, “Grace played absolutely fantastic today. She handled the pressure beautifully – that big stage and audience at Hershey can all kind of pile up on you and be too much to handle. Grace was a little nervous at the start but then settled in and played a great match. Dasha has strong groundstrokes, and she can hit back your best shot, time after time.
“It was great that some of Grace’s teammates came up to watch her play today. We’re getting together with her teammates and their parents after the match for a celebratory dinner.”
On Friday, Li won her first two rounds at Hershey, defeating North Allegheny junior Sara Fernandez, 6-3, 6-0, and beating Manheim Township senior Kayla Kurtz, 6-0, 6-1. In the semifinal Saturday morning, Li defeated Liberty sophomore Helena Lynn, 6-2, 6-2.
It was a memorable season for the Unionville girls tennis team, which, led by Li, finished undefeated and captured the PIAA 3A state team title.
Johnston said, “Both this year, and last year, Grace’s Universal Tennis Ratings improved during the high school tennis season, and I think Grace is a good example (of how) your UTR ratings can improve by playing high school tennis.”
******
Conestoga had two entries in the PIAA 3A doubles state championship at Hershey Friday and Saturday. One of the two Conestoga doubles teams, the Pioneer pair of junior Kate Emmanuel and freshman Isabel Emmanuel, finished fourth at the state doubles tournament.
The Emmanuel siblings, who finished second in the District 1 3A doubles championship, advanced to the state semifinal Saturday before falling to the Radnor pair of junior Leina Ciarrocchi and senior Mia Xie, 6-4, 3-6, 5-7.
In their two rounds Friday, the Emmanuel siblings defeated the Distruct 10 doubles champion, Nabiah Bhatti and Lina Warrier of McDowell, 6-0, 6-0; then beat the District 7 doubles champion, Sophia Cunningham and Sylvie Eriksen of Mount Lebanon, 6-2, 6-3.
The other Pioneer pair at the PIAA 3A state doubles tournament, junior Jennifer He and senior Bella Chen, lost their opening match to the Parkland duo of freshman Lexie Warsing and senior Leah Zolotareva, 3-6, 3-6. The Parkland duo, who won the District 11 doubles title, went on to finish third in the state tournament.