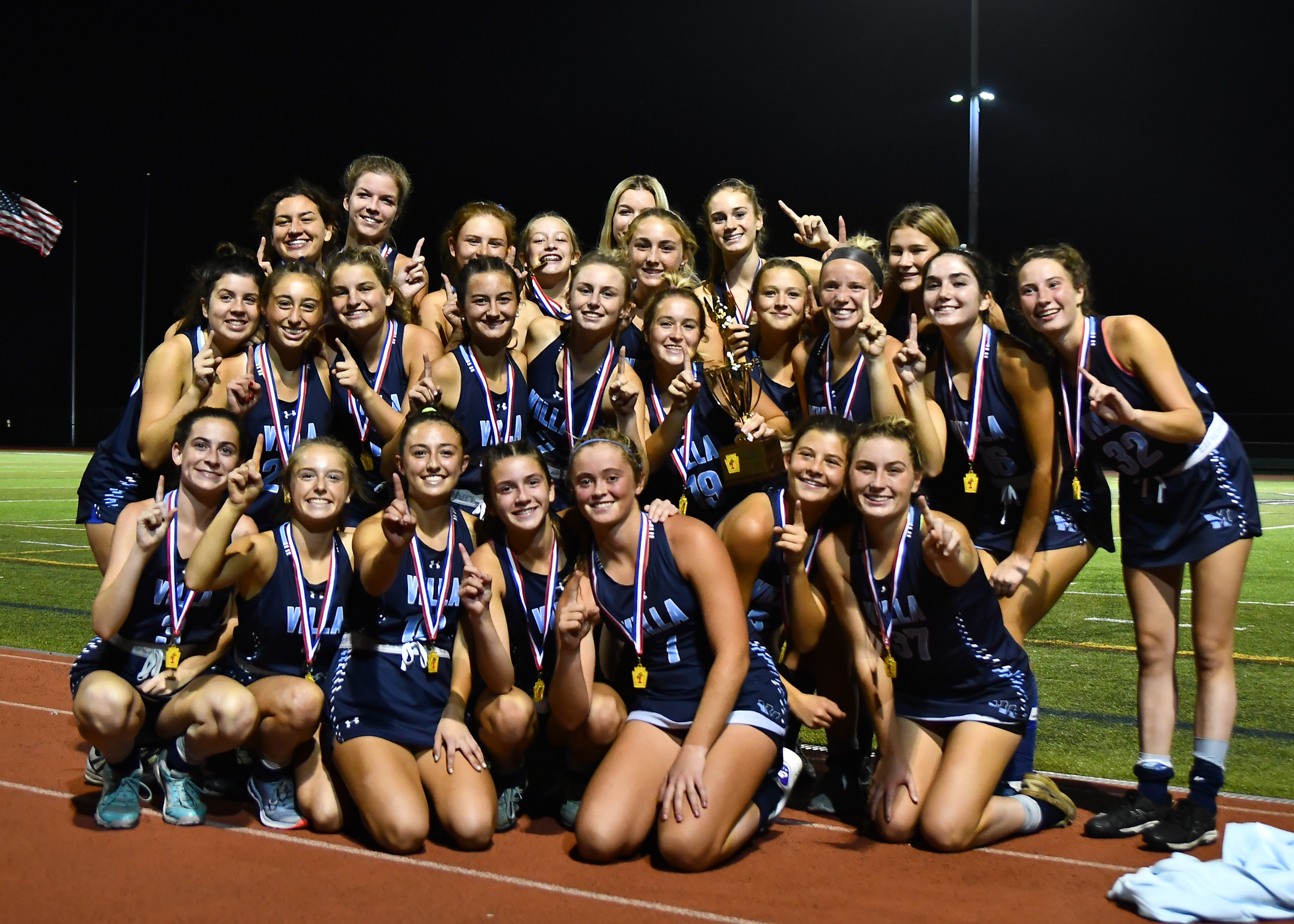 WORCESTER >> The third time’s the charm.

Twice during the regular season, Gwynedd Mercy beat Villa Maria on the way to winning the AACA crown. But, reminiscent of last season when the Hurricanes took both regular season matchups only to fall to the Monarchs in the District 1 championship game, Villa Maria captured the Class 2A crown with a 3-2 victory over Gwynedd Mercy on Saturday night at Methacton High School.

With the win, Villa (16-6) earned the right to host a first-round game in the PIAA championship tournament. The Hurricanes will square off against the sixth-place finisher from District 3, Manheim Central (15-6-1) on Tuesday at Maurene Polley Field. Game time is slated for 2 p.m.

“We’ve had some great games leading up to today, and brought some great momentum coming in,” said Villa coach Katie Evans. “The start of the season with this young team, it wasn’t so much about wins and losses as it was wins and lessons. That has begun to pay off for us in the post season.”

The two teams both came out throwing haymakers, and put points on the board before five minutes had been played.

The Monarchs (16-4-1) struck first, converting on a penalty corner with a goal from Caroline Fitzgerald. Not even a minute later, the Hurricanes answered back with their own goal, the first of three from freshman sensation Caitlin Connell.

“Caitlin is just amazing,” said Evans. “She’s just such a natural forward and really adds a lot of dynamic, dangerous play to our game. It started with some beautiful passing, and then when we get it up to C.C., she’s fast, she has great hands, and she wants to score.”

The Monarchs took the lead once again late in the period, this time on a goal from Lily Caine.

Villa began to take charge in the second period. The Hurricanes controlled possession, keeping the ball on their offensive end for the bulk of the period, and forced five penalty corners to none for the Monarchs. But the Gwynedd Mercy defensive unit kept Villa off the board, and the game went to halftime with the Monarchs leading 2-1.

That lead held up until the final period, when Connell struck twice more to tie the game, and to put the Hurricanes on top.

“I’m speechless right now. I’m still shaking,” said Connell. “This means so much to all of us, the players, coaches, fans, all of us. We’ve worked so hard all year from the first day of practice, it feels so amazing. We’re going to keep working our butts off. This was a huge win for us, but it isn’t the end. We’re just going to keep going after that state title.”

The Hurricanes were getting it done on the defensive side of the field also, limiting the Monarchs’ scoring opportunities, and keeping them out of the cage for the final three periods.

“We’ve been working super hard to get back on the top of the district, and the work is paying off,” said senior captain Gia Whalen, an Iowa commit. “Losing to them last year was really tough and a wake-up call. We have really started to bond as a team. I believe in this team so much. I don’t think we’ve peaked yet, so we still have a long way to go.”

Thoughts of a rematch in two weeks in the state finals may not be a reach. Gwynedd Mercy, despite the loss, will also host a game Tuesday in the first round. The Monarchs will face the District 12 runner-up, Benjamin Rush.

“From the beginning of the season, states was our goal,” said Gwynedd Mercy coach Katie Ronan. ”We’re just going to take what we need to work on after today, and get back to work to make a run at states. I have total belief this team can turn it around and get back working towards our ultimate goal.”