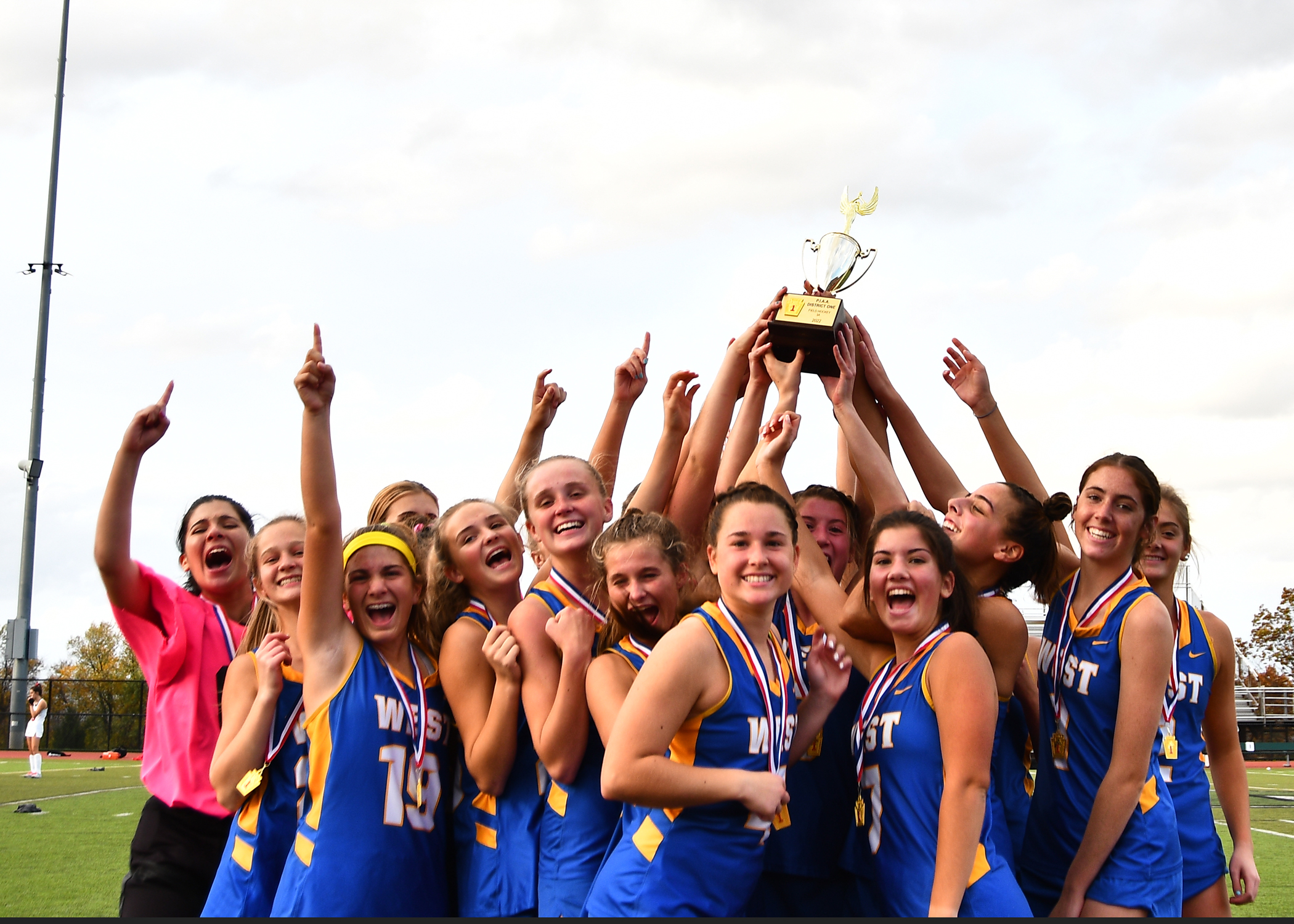 EAGLEVILLE >> Like the field hockey heavyweights they are, Conestoga and Downingtown West slugged it out for four periods, before the Whippets’ Ciara Margetich scored on a penalty stroke with just 32 seconds left on the clock. The goal gave West a 3-2 victory over Conestoga in the District 1 Class 3A field hockey championship game at Methacton High School on Saturday.

With the win, West (19-3) will host a first-round state playoff game on Tuesday. They will face Souderton, the seventh-place team out of District 1 at Kottmeyer Stadium at 7 p.m.
“That was an intense game,” said West coach Courtney MacPherson. ”We knew coming in it would be a tough game, since we lost to them earlier in the year. I’m just really proud of these girls and they way they handled themselves down a goal and coming back to tie it, then getting the win.”
Tied 2-2 with time running down, all signs pointed to overtime when a Conestoga player was tagged with a foul for attacking from behind and interfering with a scoring opportunity and West was awarded a penalty stroke.
Margetich took it, and delivered the game winner to goalie Alex Lepore’s right.
“Whenever I’m in that spot, I just keep telling myself not to overthink it, and just go for it,” said Margetich. “I started freshman year with my sister, and we won districts then. It’s great to finish high school doing it again.”
Margetich kicked off the scoring, finding the back of the cage with three minutes to play in the first.
“We talked all week about how, against a tough team like Conestoga, we had to come out strong and try to get out front early,” said Margetich. “It just feels so good. Conestoga is a great team, and well disciplined. This was our goal all year — to win districts. Now we have to take our shot at winning states.”

Conestoga (19-2) scored the next two goals, the first when Shae Wozniak shot a bullet across the front of the cage and into the sideboards, and then converted a penalty corner when Kate Galica scored with a tip-in.
“We came out so flat,” said Conestoga coach Regan Marscher. “Credit to West on taking advantage of our slow start. I wish we would have had a shot to see how overtime would have played out. But we’ll just have to learn our lessons from today, and make a run at state finals. As much as we would have liked to win a district championship, the games the next two weeks are even bigger.”
Now trailing 2-1, West got right back to work, and forced a penalty corner with 13:17 to play in the fourth. Mia Freeman put the ball in play on the insert, slid over to the post, and slipped one behind Lepore for the equalizer.

“We prepared all week for them” said West back Kate Mahmud, who was credited with a defensive save in the game. “We saw a lot of their corners and saw a lot of them were on tip ins, so we were just prepared to defend against that. It seems like forever since we’ve beaten them, so it just feels so good to get the win in a game as big as this one.”
Conestoga will host Penn Manor on Tuesday.