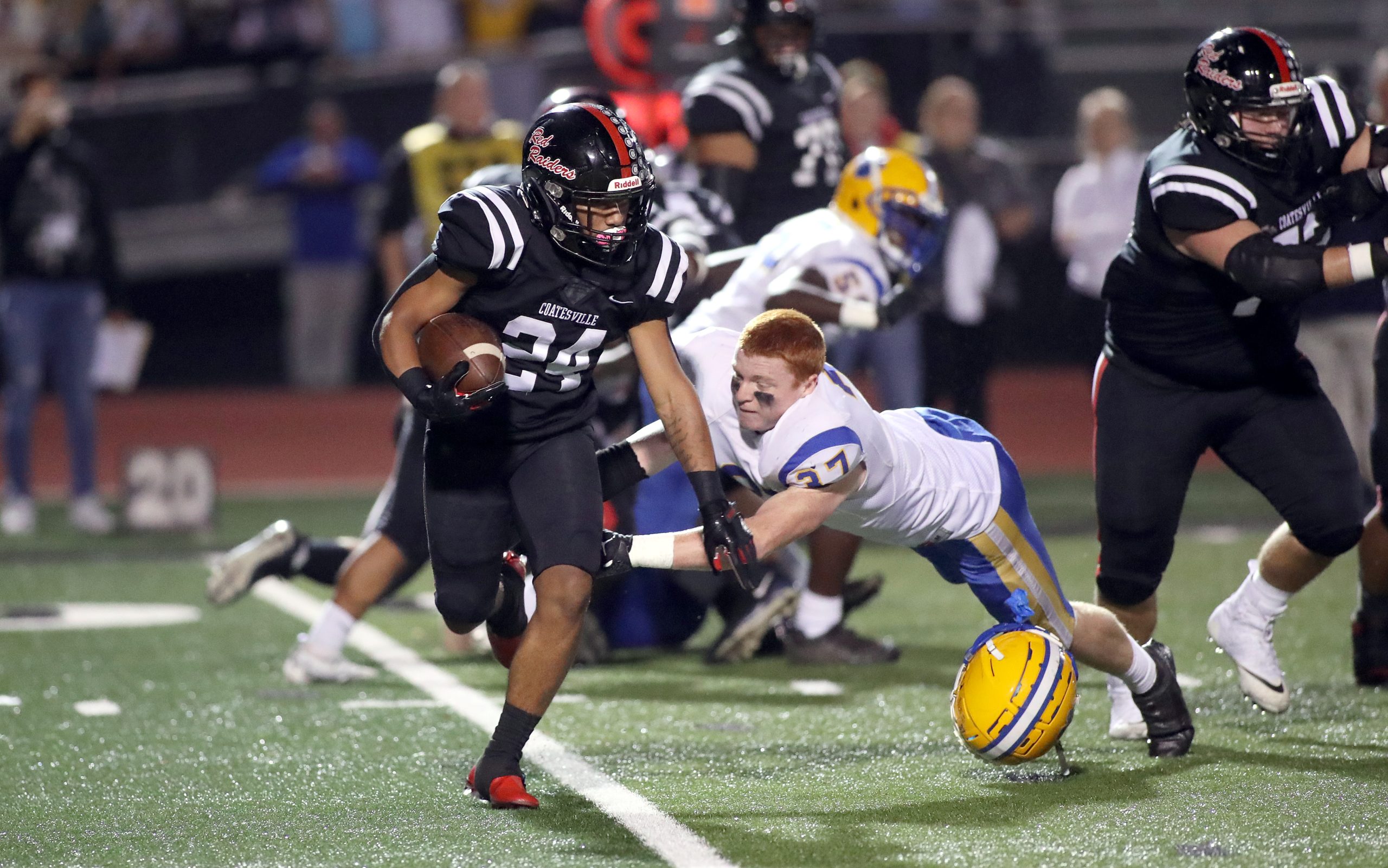 CALN >> Sometimes football is a simple game. The team that imposes its will physically and mentally usually wins the game.

Friday night at Coatesville Memorial Stadium the Downingtown East Cougars played old-fashioned, smash-mouth football and knocked the fifth-seeded Red Raiders out of the District 1 6A playoffs with a convincing 31-15 win.

The win puts the 12th-seeded Cougars into next Friday’s matchup with No. 4 Downingtown West, who downed Conestoga in other first round action.

Downingtown East (8-3) got a superlative performance from senior running back Bo Horvath who rushed for 255 yards 39 carries with three touchdowns. Horvath scored on runs of 58, 36 and 80 yards in a virtuoso performance. “We lost to these guys two weeks ago and then we lost to D West,” Horvath said. “We were really hungry for a little revenge and a win, and we feel we are a resilient team and I think we showed that tonight.”

Coatesville actually jumped out to a 15-0 lead in the second period with the Red Raiders scoring on a Spencer Ferguson run, a 19-yard touchdown pass from Harrison Susi to Amir Haskett, and a safety by Brad Lentz, who trapped Cougars quarterback Jamy Jenkins in the end zone.

But the Cougars came back in the later stages of the second period and scored on two long Horvath runs, and after a successful two-point conversion it was 15-15 at halftime.

“We just went back to doing what we do best and that is play power football and lean on people.” Horvath said.

The two teams traded possessions in the third period with neither offense gaining much traction. But after a Cougars punt pinned the Red Raiders (8-2) deep in their own territory, Susi was called for intentional grounding in the end zone, and the resulting safety put Downingtown East into the lead, 17-15.

After the Raiders kickoff, the Cougars ground game went to work again with Horvath doing most of the damage. But it was a pretty 10-yard touchdown pass from Jenkins to Erik Thelander to make it a 24-15 after three periods. Coatesville still had life as the Raiders went down the field. But in a fourth-and -two situation, the Cougars stopped Susi short of the first down markers and the Cougars took over possession with 10:21 to play in the fourth period.

The then Red Raiders defense forced a Cougars punt, and after a long 39-yard pass from Susi to Javon Scott, Coatesville was in business. Susi then scrambled to the Cougars 10-yard line, but that is where the drive stalled and the Red Raiders elected to go for a 22-yard field goal. The kick was wide and it started to look like the Cougars were going to knock one of the District 1 favorites out the playoffs.

That became almost a certainty when Horvath broke three tackles and went 80 yards down the left sideline to make it a 31-15, and the mighty Raiders were on the ropes and ultimately knocked out of the playoffs. “Coatesville is a first class program and you have to play very well to beat them,” Downingtown East head coach Mike Matta said. “And we played very well. (Francisco Hall and Takiyah Lynch) are a handful, and Susi is elusive but I think we did a good job on him. And the first time we played them we overthought things.

“We got out-played and out-coached (in the first meeting) and we went back to doing what we do best, and I am really proud of the kids. And nobody in the county is better than Bo. He was tremendous again for us tonight.”