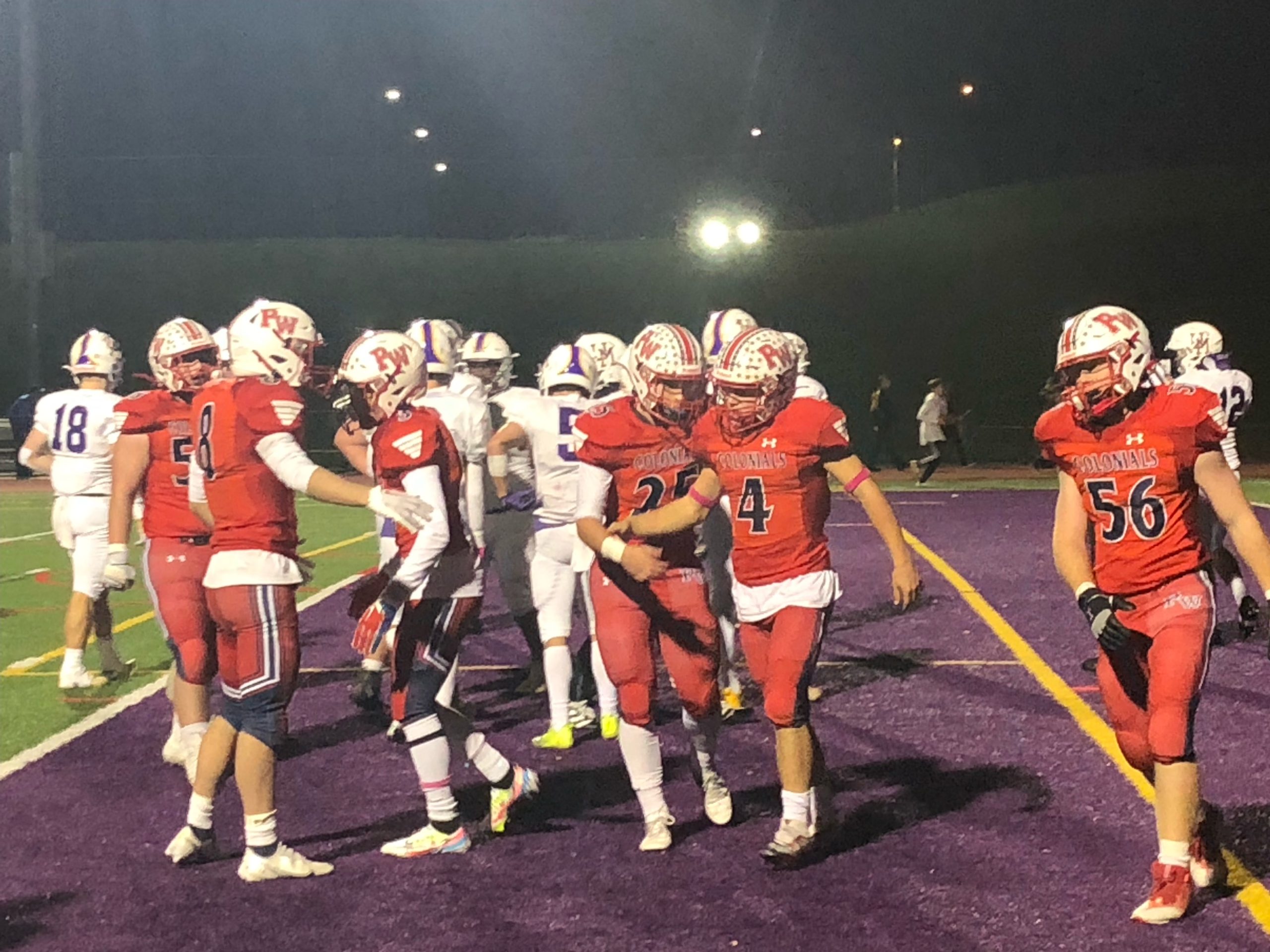 UPPER MORELAND >> Plymouth Whitemarsh knew it and now everyone else does too.

With a dominant effort from the Colonials to claim their second straight division title, it left no doubt that the SOL American runs through Plymouth Whitemarsh until someone proves otherwise. Although they took some time to celebrate, coach Dan Chang was quick to remind his team this was only the first check on what they’re hoping is a long playoff run.

The Colonials had a tremendous start and never wavered as they ran over host Upper Moreland 56-20 on Friday to claim the outright title.

“We make it a point to come out flying around and come out with a lot of energy to try and get on them quick and set the tone,” senior quarterback Aiden O’Brien said. “That’s our goal every game. It feels awesome, back-to-back and last time we were on this field we got our butts kicked so we came with a little thing on our shoulder.

“This was step one. Districts is step two and states is step three.” Friday’s contest matched its billing as a true championship game, with either PW (8-2, 5-0 SOL American) or UM (8-2, 4-1 SOL American) taking the title outright with the win. Any notions of it being a protracted battle deep into the fourth quarter, however, were smashed in a little less than five minutes of game time.

With the Golden Bears celebrating their seniors and charging up their home crowd before the game, they had almost no time to get behind the team on the field thanks to Nazye Boggs. The PW junior had an electric performance in the first half, starting with his 89-yard kickoff return to put the Colonials up 7-0 just 15 seconds in.

“I saw the lane and took it,” Boggs said. “I was off. I felt it right there. I’m always thinking about making a play like that.”

Running back Luke Winterbottom, who had a really good game in his own right, said the return was long overdue for Boggs and the junior receiver/defensive back readily agreed. The play not only served to spark PW, but Boggs as well who went on to record a blocked extra point, a forced fumble, a leaping 29-yard catch and an interception in the back of the endzone just before halftime that ensured the second half would be played under a running clock.

“It kept getting better and better,” Boggs said. “That’s how we want it, every time, our coach tells us to keep our foot on the gas.”

Following the kick return, the Colonials caught the Golden Bears off-guard with a squib kickoff that nobody from UM could field and PW recovered for possession and a short field. Tommy Hannon capped that one off with a 28-yard scoring run on fourth and the Bears’ first possession ended with Gregory Feinberg intercepting Shawn Herbert and returning the pick to the 12, where Winterbottom would run in a 10-yard TD a few snaps later. The whole act took 4:46 off the game clock and ended with PW holding a commanding 21-0 lead. Upper Moreland rebounded with Herbert finding Stephen Broderick for a 43-yard touchdown  but the Colonials got a 65-yard kick return from Chase Smith then went the rest of the way down and answered when Hannon scaled the pile at the goal line for a one-yard score.

Upper Moreland, which will qualify for the District 1-5A playoffs along with PW, didn’t have a great night but Broderick put out another resolute effort. The senior carried the ball 23 times for 103 yards and had most of them on his team’s second scoring drive. Broderick accumulated 58 of the 73 yards on the drive with the rest coming on a penalty flag that cut the lead to 28-13 on his one-yard plunge early in the second quarter.

Plymouth Whitemarsh then spent the rest of the half piling on.

“We knew coming into the week we were the better team but it didn’t mean anything if we didn’t come out and show it,” Winterbottom said.

PW and O’Brien answered the second Broderick TD with a drive that ended on the quarterback keeping it for a 12-yard run. Boggs’ forced fumble a few plays later set up yet another short field and by this point, the Colonials could have a little fun.

O’Brien and Winterbottom combined on the highlight offensive play of the game, with the quarterback slipping out of trouble in the backfield, then throwing a jump pass to Winterbottom, who completed the 12-yard touchdown by running over a defender at the goal line.

“I think it’s just chemistry with Aiden, he made a great play evading the defenders in the backfield and he was able to hit me,” Winterbottom said.

“That was improvised,” O’Brien said. “I don’t even know what I was doing, I tried to make the play. We’ve got great athletes at every position, we trust each other, we know we can make the big plays and we do stuff like that.”

The defense forced a punt, the drive featuring Jaeshaun Johnson absolutely obliterating a third down running play to down Broderick for a loss, Winterbottom delivered the knockout punch. A handoff, a couple nice blocks by the guys up front and an extra burst of speed from Winterbottom at the second level saw the junior jet off for a 69-yard run that put the Colonials up 49-13 with 1:44 left in the half.

With the win, PW unofficially moved into the No. 4 spot for the District 1-5A playoffs, meaning the Colonials will get at least two home games on their path to a district title.

“I feel good,” Boggs said. “This game really showed our potential and what we can do.”