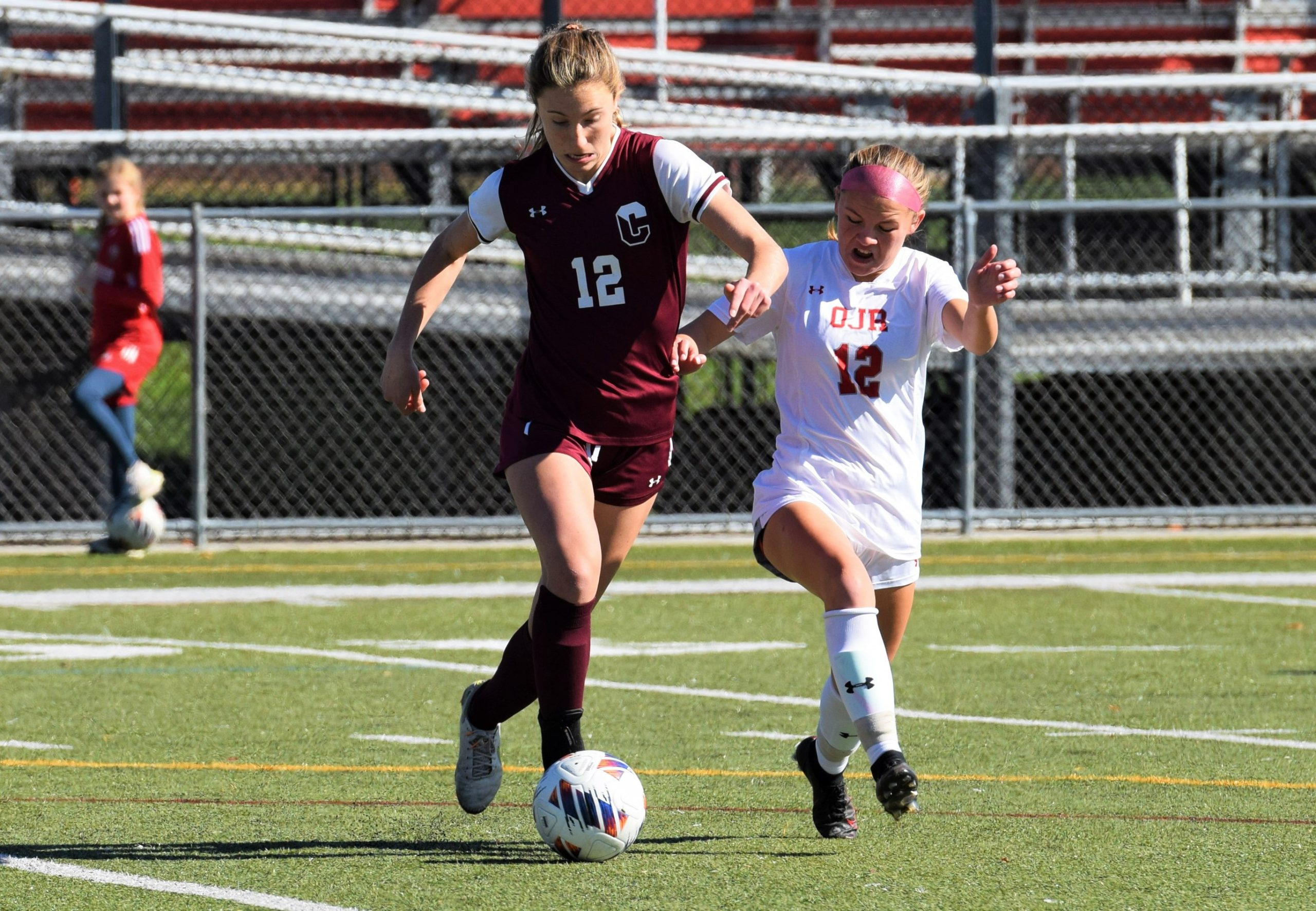 BERWYN >> In a defensive battle, one chance is all it takes. The problem was, that chance wasn’t coming for Conestoga or Owen J. Roberts in regulation. It finally came in the early moments of the first overtime, as Keira Kemmerley scored to send the top-seeded Pioneers to a 1-0 victory over the Wildcats in the quarterfinals of the District 1 Class 4A Girls Soccer Tournament on a beautiful fall Saturday afternoon at Teamer Field.

Conestoga (17-1-2) moves into the semifinals, where they will host fifth-seeded Neshaminy on Tuesday.

“Everyone is super excited,” said Conestoga coach Deane Mariotti. “Going to the next round guarantees a trip to States, where the girls want to be. The girls have high expectations for themselves, but they’ve been doing a really good job of taking one game at a time. I think they are mentally prepared and technically sound and they work really well together.”

“I think we played all so well together,” said Kemmerley. “I think out of this whole season and postseason, this definitely has been our best game. We worked our butts off and worked hard for each other.”

It was a game where scoring opportunities were hard to find. Both defenses were well organized and hard to break down. There were 10 shots and five saves in total.

“It’s a game that should’ve been played in the semifinals,” said Owen J. Roberts coach Joe Margusity. “We were injured early in the season and took three, now four, overtime losses. But, Conestoga is a great team. We did what we could against them.”

The eighth-seeded Wildcats (16-5) had their best chance when, off a corner kick, Meryn Primanti’s header went just over the top.

The Pioneers came within inches of taking the lead with almost two minutes left. They earned a free kick following a foul about 30 yards out. Mia Galaro stepped up and hit a well-struck shot that hit the underside of the bar and bounced down. The follow up header from Amelie Stewart was easily handled by goalie Colby Wasson.

The remaining time ticked off, so it was off to overtime. The Pioneers started to slowly own more of the territorial play, which they kept into the extra session. They held the Wildcats for most of the OT and they ended it a little more than 2:30 in.

The ball pinballed to Chloe Brown just outside the penalty area and she touched it to Kemmerley, who took a touch, then unleashed a low shot that beat Wasson inside the left post to send the team into joyous celebration.

“Chloe tapped it to me. This is the second play I was in the right position. Chloe found me and I stayed composed and put it in,” said Kemmerley.

One big decider in the game was the defensive job the Pioneers did on OJR’s explosive striker Alexa Vogelman. She was held down and had very limited time on the ball. Most of the heavy lifting was done by Stewart.

“We put Amelie Stewart man-to-man on her,” said Mariotti. “Amelie played esssentially man-to-man against the midfielder from Springside Chestnut Hill, so we knew Amelie had the pace and the quickness to stay with her. She did a great job. Vogelman hardly touched the ball.”

“They handled Vogelman as well as any team has all year,” said Margusity. “I think our girls were a little knackered and Conestoga had a lot of energy coming into overtime. They pinned us back and got the win.”

Owen J. Roberts now goes into the consolation rounds with a berth to states still ahead of them.

“We just need to win one to get to the state tournament, and that is the ultimate prize,” added Margusity.