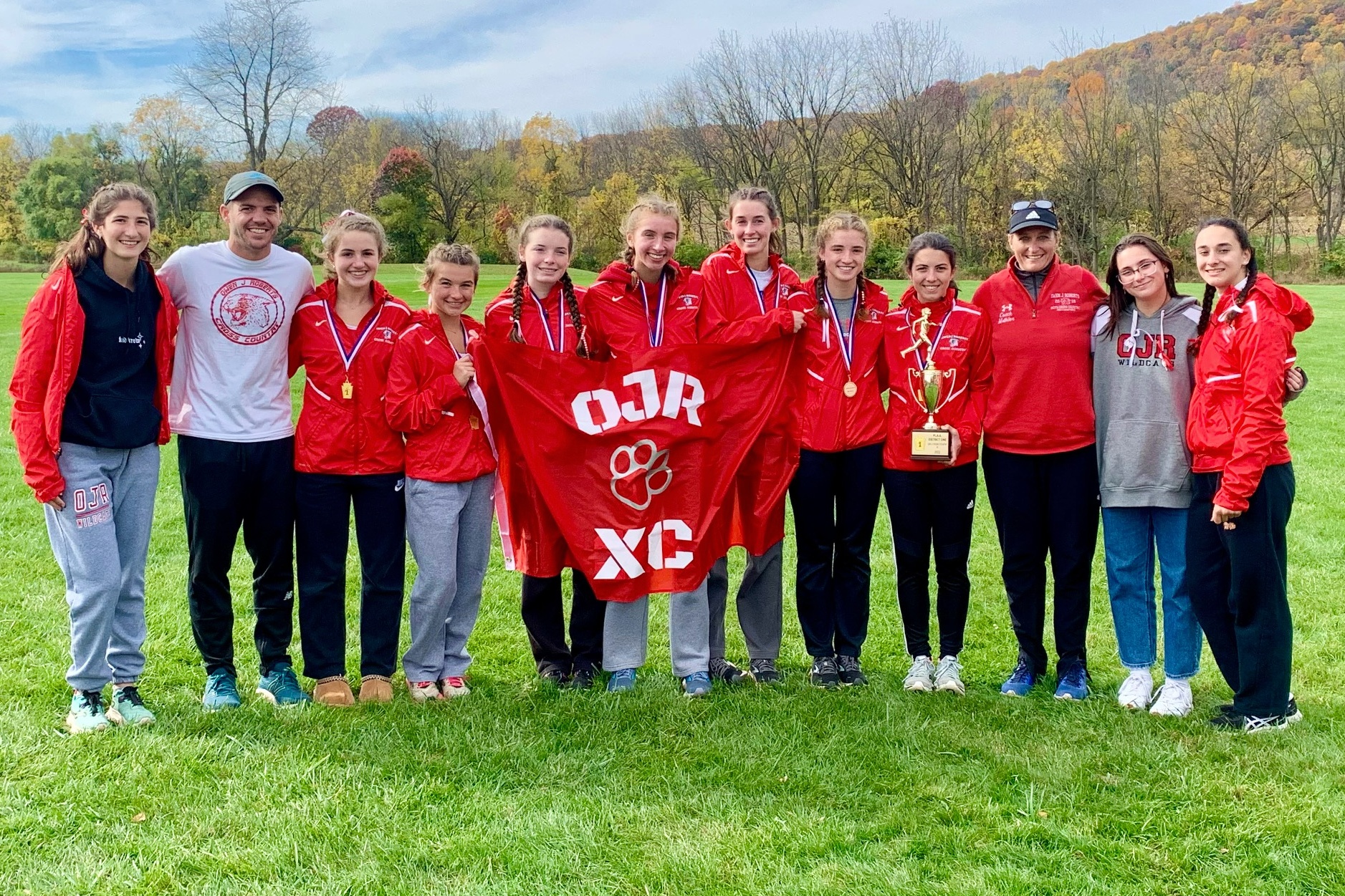 The top runners from District 1 ascended upon Lehigh University Friday morning and the Pioneer Athletic Conference Championships broke out. That’s if you looked at the girls’ Class 3A team standings.

It was a top 3 finish for PAC teams as Owen J. Roberts continued their team dominance this fall by winning the team title (129), followed by runner-up Phoenixville (162) and third-place Perkiomen Valley (184).

“It was a great race for everyone,” said OJR senior Claire Zubey. “We all wanted this so we’re super excited that we were able to come away with the win. First time ever.”

“It’s something we’ve really been working towards and I think it feels so great to have all our hard work pay off this season,” said fellow Wildcat senior Grace Fennell.

The Wildcats were the top team at Lehigh for the second time this fall – they were also team titlists at the Paul Short Run on Sept. 28.

The Phoenixville girls’ cross country team poses with their medals after placing second as a team in 3A at the District 1 Championships Friday at Lehigh University. (Courtesy Dan Cunningham)

Runners compete in the girls’ Class 3A race at the District 1 Championships Friday at Lehigh University. (Courtesy Dan Cunningham)

The PAC’s top finisher on the boys’ side was OJR senior Andrew McGonigle, who placed eighth in 15:43.70. Hatboro-Horsham senior Brian DiCola continued his torrid fall by winning the race in 15:01.30, 15 seconds ahead of runner-up Patrick Lawson of Haverford (15:16.30).

Girls’ winner Woehlcke, who shaved more than a minute off her 2021 district time, started the race in the lead but had a pack, including Zubey, catch her at the two-mile mark of the 5k race around Lehigh’s Goodman campus. Zubey was up front for half a mile at that time but ‘didn’t have the closing speed’ to stay there to the finish.

“The goal is always to win, but I’m still really happy with my race. I got a 10-second PR so that’s really good,” Zubey said. “I wanted to go out nice and relaxed and work the second half of the race and I did exactly what I wanted to do.”

Taylor, D’Angelo and Fennell placing within five positions of each other wasn’t necessarily by design. But runners who practice together found a way back to each other.

“It took some extra traffic (to navigate) in the first 1,000 meters but I pretty much settled in and it was smooth sailing from there,” said Fennell. “It was pretty solo for the first mile. A lot of us struggled to get out of the box well. We were just working our way up and just trying to stay relaxed through the first half and then working the second half.

“Khya sprang up on me and we stuck together for the second mile and then we ultimately found Ava as we approached the chute (near the finish).”

Runners compete in the boys’ Class 3A race at the District 1 Championships Friday at Lehigh University. (Courtesy Dan Cunningham)

“We’ll probably have a big workout but otherwise take it pretty easy. There’s not too much that we can do at this point. We already have everything we need for the state championship,” said Fennell. “The fitness that we have is the best fitness that we’re going to have this year. I think we’re in a perfect position to do some big things at the state meet.”