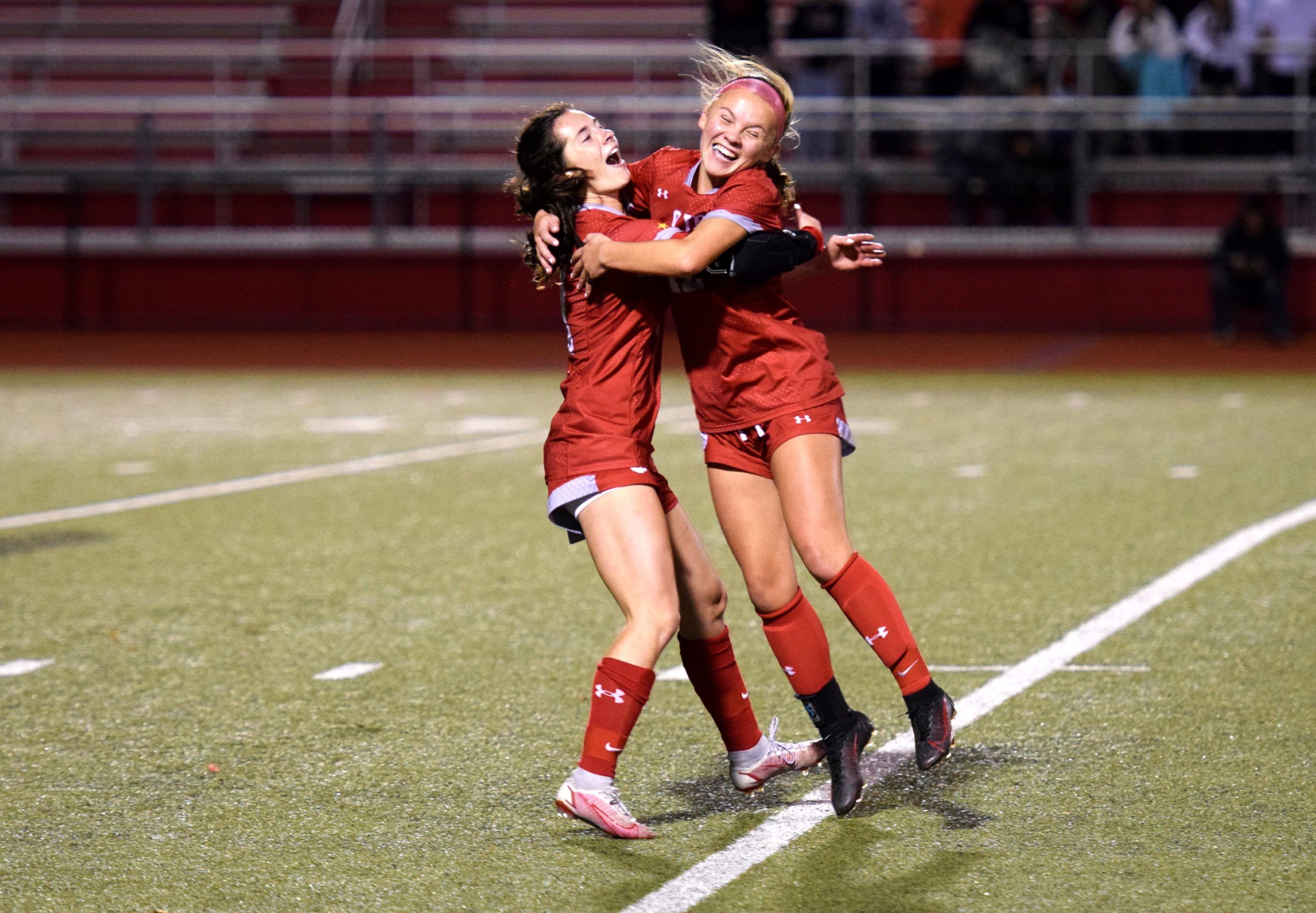 BUCKTOWN >> You know you’re doing something right when the person you ‘share a brain with’ can’t keep count.

Thursday was such a good night for Alexa Vogelman, Gabbi Koury and the Owen J. Roberts girls soccer team, Vogelman managed to confound her best friend and three-sport teammate Koury … even in a game she was playing in.

“I came off the field and she said something about five goals,” said Koury. “I was taken back. I didn’t even realize she had five goals. … She amazes me how good she is every game.”

When things are going that well, who’s counting?

Actually, the record books are and it was a record-setting night as senior forward Vogelman’s five goals made her the program’s single-season goals leader and No. 8 seed Owen J. Roberts was a house of fire in a 6-1 downing of No. 9 Downingtown East in a District 1-4A second round match at Wildcat Stadium.

Vogelman scored a first-half hat trick, her third coming on a 35th minute penalty kick, to pass the 34-goal marks of former OJR greats and All-Area Players of the Year Laura Kane (1998, 2000) and Mahogany Willis (2017) on the program scoring chart. After tallying two more in a seven-minute span in the second half, Vogelman upped her season total to 37 goals.

“It feels good,” Vogelman said of becoming OJR’s top single-season scorer. “But I really wouldn’t have been able to do it without my teammates through all four years, the ones who have graduated and the ones here now. I don’t do it myself. I do it because my team helps me and for that I’m grateful.”

Alexa Vogelman has a first half hat trick and Owen J Roberts is out to a 4-0 lead on Downingtown East, 4:47 1H
Vogelman becomes the OJR single season goals leader at 35, surpassing past standouts Laura Kane and Mahogany Willis pic.twitter.com/WRuW74o4u9

Owen J. Roberts advances to face No. 1 seed Conestoga – a 1-0 winner over Upper Dublin on Thursday – in a quarterfinal on Saturday at 12 p.m. at Conestoga. Downingtown East saw its season conclude with a 14-4-2 record a year after winning the District 1-4A championship.

Thursday’s game was a rematch of last year’s District 1 final won by the Cougars in overtime on a goal by current senior Lauren Reimold.
The margins weren’t nearly as slim this meeting thanks in part to the Wildcats’ many motivations. The potential of a season- or career-ending loss, the desire to oust the team that denied them a district title, righting the distaste for how they were unseated in the PAC semifinals … you name it, all contributed to OJR’s fiery play Thursday.

“Last year, them beating us in the district championship in overtime and taking the championship from us, that was a big motivation,” said Koury.

“Getting in the playoffs, you realize that at any moment it could be your last game, the day before could be your last practice. It’s kind of sentimental. It’s scary to think about so you give it your all because you don’t want your season to be over.”

The Cougars, a PIAA semifinalist last year, were unable to avoid that fate on a night they ran into a buzzsaw.

“We knew coming in that Owen J. Roberts was going to be a very tough team. It stunned me that they were as low as No. 8,” said D-East head coach Jason Luzak. “They have four losses on the season and I have no idea how they lost four games because they are a very solid team front to back. And when you have No. 11 (Vogelman) up top, who can score five goals in one game, she’s certainly a player. I expect them to make a deep run in the playoffs here.”

“On the plus side, we only lost to teams that were ranked higher than us in the district,” said coach Jason Luzak. “We beat everybody who was lower ranked than us so it’s not like we lost soft games. We played a consistently solid level of soccer right up until this game.”

After missing out on a PAC championship three-peat after falling to Perkiomen Valley in the semifinals on Oct. 18, Vogelman was intent on not allowing that to be the final word on her high school soccer career.

‘’The disrespect we’ve received from teams, including the PAC teams, I think it motivates us every day to prove those people wrong,” said Vogelman. “We all believe in ourselves and this is just our time to show people what we’re made of. I think we didn’t quite have that fire in the beginning of the year, but I think we’re starting to show it. Now we’re proving to people how good we are.”

The layoff between the PAC semifinal and district first-round win over Boyertown on Tuesday may have been the lighter fluid the Wildcats needed.

“When we lost that semi-final, we had a week to prepare, a week to become mentally tougher,” Vogelman said. “I think we did a really good job in that week to build upon the losses that we had to create this fire. Everything is fueled by something, and I think that loss has fueled us.”

Koury provided the match with a 25-yard low drive that was taken quickly enough the East defense and goalkeeper Lillian Matte weren’t able to get their angles right to give OJR a 1-0 lead at the 23:17 mark of the first half.

“My goal was to put it on frame. When we score first it gives us so much confidence and energy,” said Koury, the two-time All-Area girls lacrosse player of the year who is committed to Florida.

After assisting on Koury’s opener, the rest was Vogelman’s show.

She roasted the Cougars’ defense down the right wing and finished across goal for her first in the 20th minute, and seven minutes later doubled her total with a right-footed rip from the top-left corner of the 18. OJR benefitted from a soft penalty kick decision, which Vogelman converted in the 35th minute, to open a 4-0 lead. It would have been five had East keeper Matte (four saves) not made an excellent save on an Olivia Thompson effort from 18 yards in the 32th minute.

To the Cougars’ credit, when they could have been most demoralized is when they rose up. Just 35 seconds later, junior Karly Murlless tallied for East.

Downingtown East carried that momentum through the break and were so close to grabbing another on a Jessie Lake header but OJR keeper Colby Wasson (three saves) made an excellent diving stop.

“Downingtown East is a good team and to do that tonight and play like (OJR) did is special,” said OJR coach Joe Margusity. “There were a lot of defining moments, but a real defining moment was Colby’s save when it was 4-1. If she doesn’t save that it’s 4-2 and all the momentum is on their side. Even though we had that three-goal lead, it didn’t feel like it.”

But 1:20 later, a Fiona Sanders cross pinged around in the penalty area and found Vogelman on the left side who slotted home for the back-breaking goal. The rout was capped with 13:06 to play when Sanders played a big through-ball up the middle for Vogelman who hit the net to complete her five-star night.

“When you have a forward the caliber of Vogelman, she’s a home run potential every time she touches it,” said Margusity.

Thursday’s performance made it feel like any of the shortcomings of the Wildcats’ regular season were ancient history.

Live, learn and grow as Vogelman sees it.

“It was a learning experience. I’d rather lose then than lose now. T- be a good team you have to have setbacks. Those losses are what teaches you. Losing those games helped us. They built us.

“As a team, we didn’t have collective confidence. There was individual confidence and we’ve had to help some people build confidence. We’ve really been preaching doing it together and doing it for one another because this could end at any time. Embrace every moment.”

Alban header in OT advances No. 10 Spring-Ford to District 1-4A quarterfinals over No. 26 Council Rock South
No. 9 Upper Merion holds off No. 8 Methacton in five-set repeat of PAC semifinal, advances in District 1 4A tournament