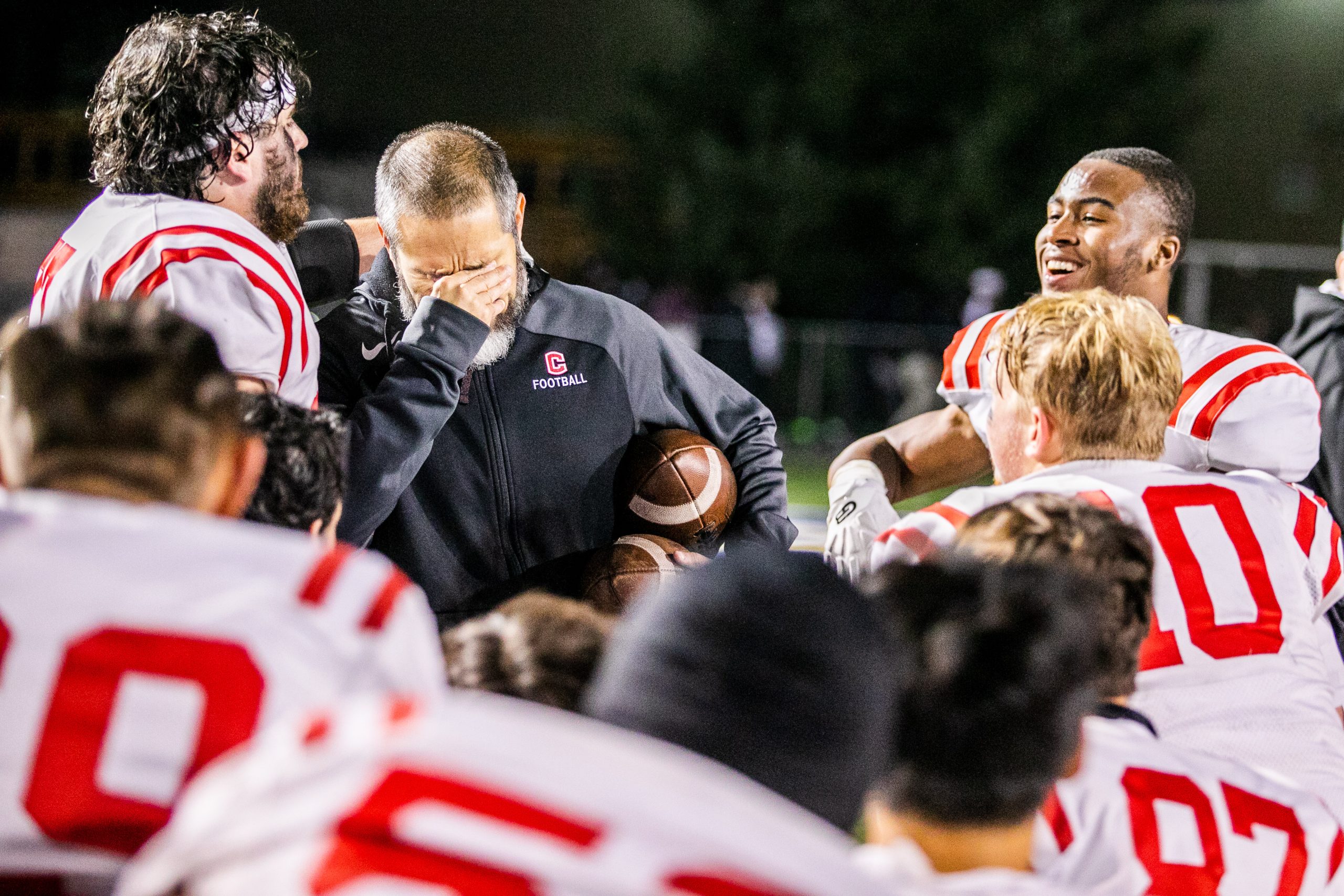 DOWNINGTOWN >> Coatesville coach Matt Ortega couldn’t fight back the emotions as he addressed his team after Friday’s game against Downingtown East.

It’s been a rough couple of weeks at Coatesville, from threats forcing school lockdowns and the cancellation of the Downingtown West game to Ortega being placed on administrative leave for off-the-field matter over two weeks.

Ortega rejoined the team Tuesday, and his presence was felt at Kottmeyer Stadium, as his team outlasted Downingtown East, 14-10, in the Ches-Mont National Division contest.

“Watching the adversity our kids went through with the whole situation the last two weeks, these guys, my coaches, my players, the school, the students, the parents, the community, they had my back,” Ortega said. “That was gonna be our motto out here. We clearly had each other’s back going into this game and we had to go out here and do it on the field. We had some adversity in the first half and we left 14 points out there, we felt like. We talked about it halftime that all we have to do is have each other’s back, take it play by play and make one more play than them and that clearly happened.”

When asked for the reason of his leave, Ortega replied: “No comment.”

Related to Ortega’s leave, Coatesville self-reported an ineligible player to District 1 this week, and was forced to take a forfeit against West Chester Rustin, in a game the Red Raiders won, 38-7. The game is now documented as a 2-0 win by forfeit by Rustin, making both Coatesville and the Golden Knights 7-1.

Whether or not it was the tumultuous two weeks played a part Coatesville’s offense started slow, but its defense was brilliant.

In the first half, the Red Raiders (2-0 National Division, 7-1 overall) held Downingtown East (2-1, 7-2) to zero rushing yards on 14 carries and 34 yards through the air. A 40-yard field goal by James Blake was the only score of the first half.

Coatesville had a touchdown pass called back due to a penalty, and the next play, Michael Luongo picked off a pass and ran it back to the Coatesville 17 to set up Blake’s field goal. On Coatesville’s next drive, Amir Haskett dropped a wide open pass that looked destined for a TD.

“We played a good defense,” East coach Mike Matta said. “I don’t know if I’ve seen a defense that good in a long time. We have to make some corrections and get going.”

The teams traded punts to open the third, but on Coatesville’s second drive, Harrison Susi connected with Haskett twice for 53 yards, setting up a six-yard TD pass to Francisco Hall.

About five minutes of game time later, Bo Horvath broke free for a 15-yard TD run. Horvath, who led the area with 1,384 rushing yards, entering the game, was held to zero yards on six carries in the first half. He ran for 94 in the third and 153 for the game.

But it was Coatesville’s running back who would finish the job. Through three quarters, Coatesville backs only had four carries. On the second play of the fourth quarter, backup Spencer Ferguson got his first carry and broke a tackle around the corner for a five-yard score. Ferguson finished with 59 yards on seven carries.

Coatesville’s Spencer Ferguson runs in for the winning touchdown in the fourth quarter. (Nate Heckenberger – For MediaNews Group)

“This is a huge win,” Coatesville linebacker Brendan Barthmaier said. “It was really different coming into the game, with all the stuff going on and all the adversity, but the defense came ready to play.”

East moved to the Coatesville 13 its next drive, but missed a 32-yard field goal with about nine minutes to play and never got close again.

“(East) was the barometer when I first got here,” Ortega said. “It was weight room and physicality and our guys have just fed off that the last 13 years. Normally we’re fast, but this team, right now, we’re built on physicality and it showed tonight.”

Susi led Coatesville with 110 rush yards, threw for 119 and even had a 14-yard reception from Haskett. The junior receiver led the Raiders with five catches for 90 yards.

The Cougars will face West in the regular season finale and would need a win to gain a share of the division crown. Coatesville would be outright champ with a win and an East win, but would share it with West if the Whippets beat East. The Raiders have won or shared six straight titles under Ortega.

“It’s a different culture with Coach O here,” Barthmaier said. “When he’s on the field, everyone’s energy is up and we trust him to set us up so all we have to do is execute.”