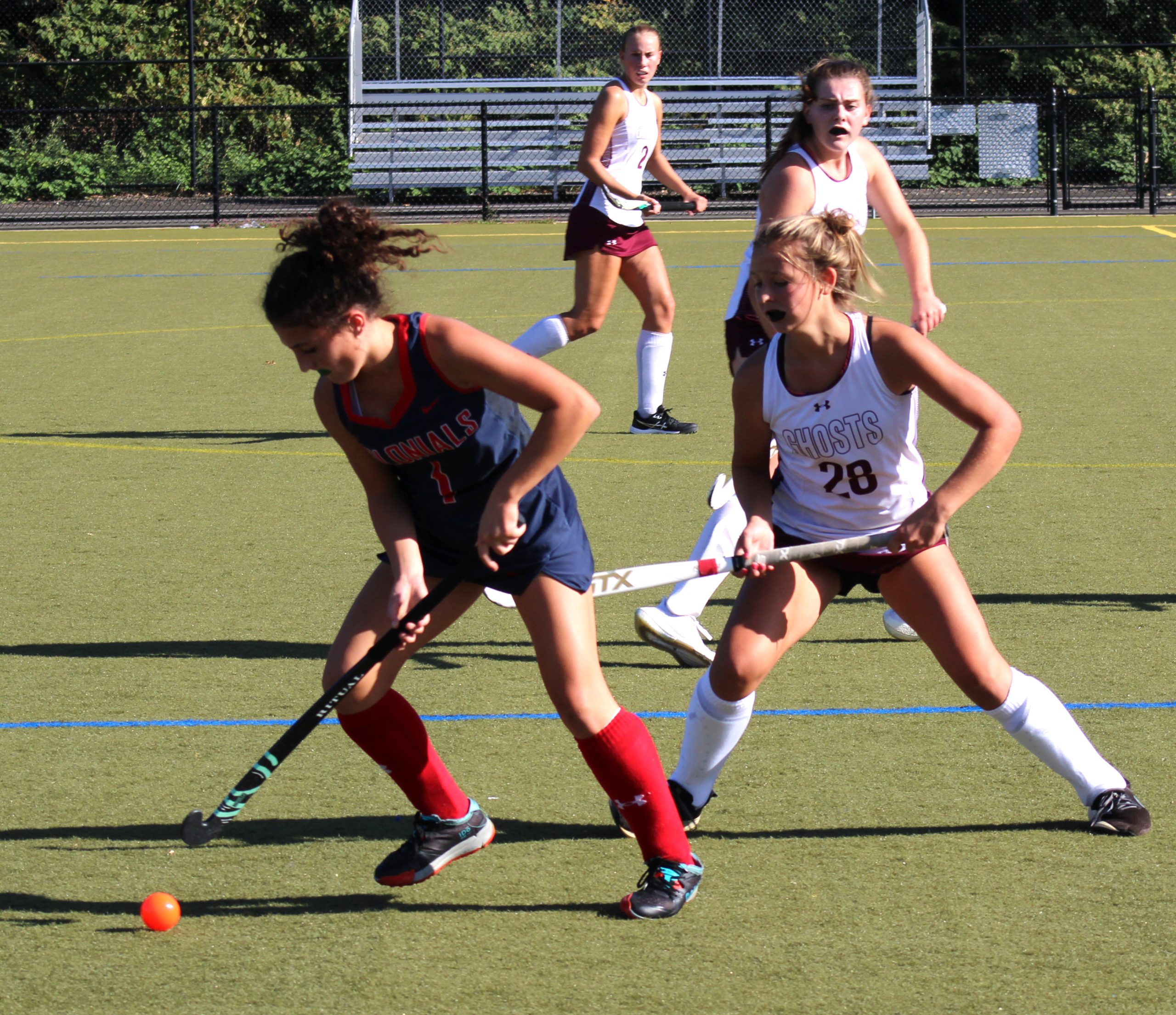 ABINGTON >> After fending off one more offensive threat by rival Plymouth Whitemarsh, the Abington field hockey team erupted into celebration as the final horn sounded on Thursday’s contest.

The Ghosts had locked down a 1-0 victory over the Colonials on this sunny afternoon on the turf at Memorial Field, helping to fuel what they hope is one final push to the playoffs.

“I would have to say, on a scale from one to 10, this is a 10 right now,” coach Katie Small said of the win’s importance. “We need this. We don’t have many practices left but we still have five games to go and chasing that district playoff spot is our top priority right now.” Abington’s Erica Devlin prepares to launch a corner, with the PW defense getting set for a stop. (Kev Hunter/MediaNews Group)

Ranked 16th and 17th in the District 1-4A standings coming in, Abington and PW battled back and forth for 60 tightly-contested minutes, exchanging possession, scoring chances and momentum.

Erica Devlin’s second-quarter goal, off a pass from Camryn Stewart, would be the lone score of the afternoon.

“I feel like we’re definitely a better team when we score first,” Devlin said after the Suburban One Liberty Division clash. “Short passing – getting it off your stick right away – was really key for us.” The Ghosts raised their record to 8-5, with a home game against Hatboro-Horsham on Monday. PW is now 7-5-1, and will host Quakertown Monday.

“PW is always a rival of ours and they always have a great team, and pulling out a win against them is always one of our goals every season. To be able to do it was a great accomplishment for the girls,” said Small. Abington’s Camryn Stewart (5) and Maddie Slavin (33) work the ball in for the Ghosts during their clash with PW. (Kev Hunter/MediaNews Group)

In preparation for Thursday’s contest, the Ghosts hit the film room.

“I had them watch the earlier game (from Aug. 30, 1 -0 loss to PW), just to see what we did well and what we could improve on,” Small said. “And prior to this game, we really went over those ideas and we wanted to execute them. I think they did a really good job of analyzing themselves. And they came out and they executed everything we wanted them to today.”

Said Small of the Stewart-to-Devlin connection: “We’ve been practicing those passes across – staying low and receiving the ball on our stick and putting it in the net. Erica and Cam just really executed it perfectly. It was great to see.” Coach Katie Small (third from left) talks to her team on the sideline during their contest with PW. (Kev Hunter/MediaNews Group)

Julia Sciotto came close to a tying goal for the Colonials but Abington withstood every surge. PW looks on from the sideline during its clash with Abington. (Kev Hunter/MediaNews Group)