Heading into Ortega-Milano XV, a look back at the previous 14 matchups 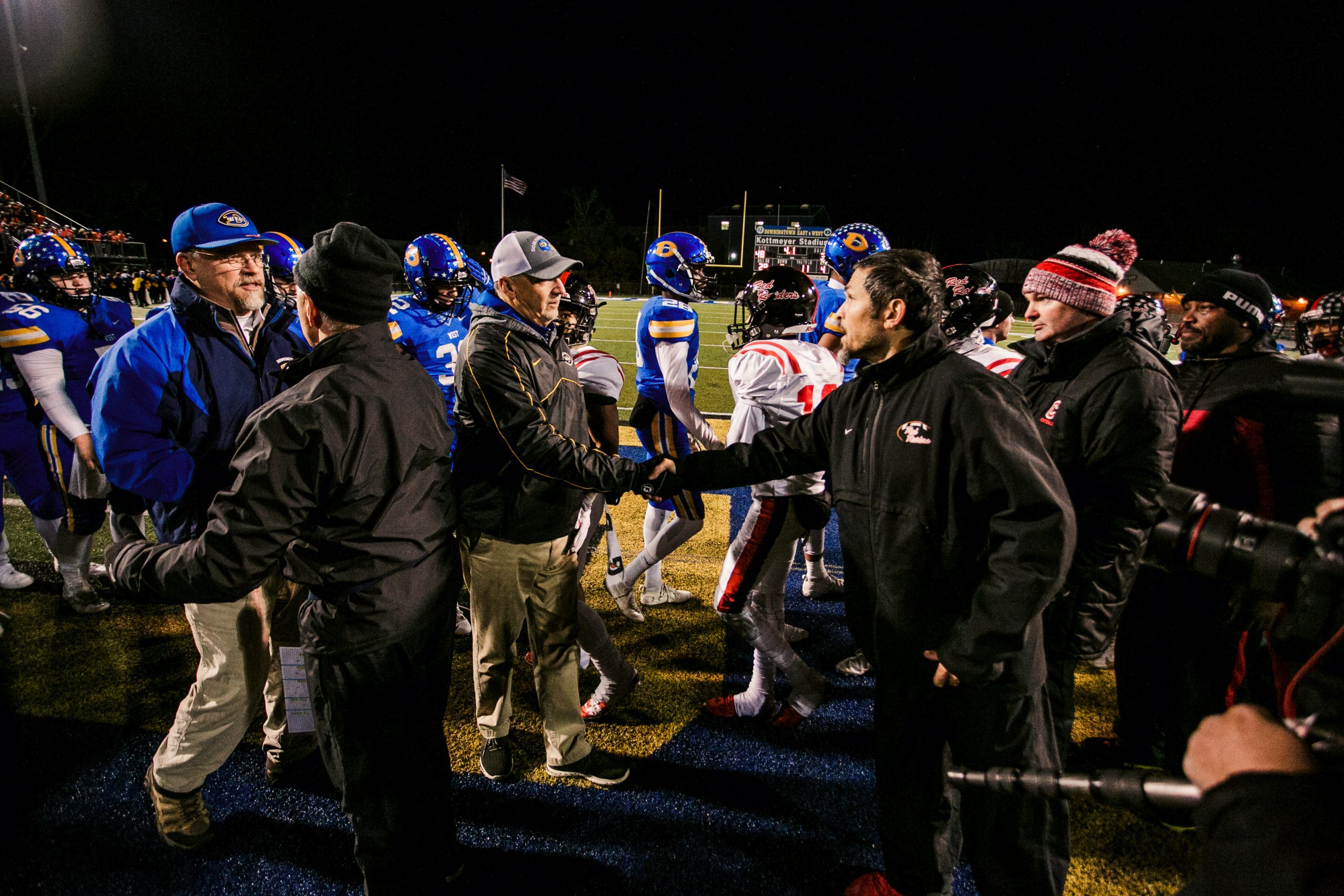 Kessan Christopher ran for three first-half touchdowns and quarterback, Bret Gillespie broke a 61-yard TD run to propel the Whippets over Coatesville in their first matchup with Matt Ortega at the helm. With this win, and another against Bishop Shanahan in the regular season finale, West shared the Ches-Mont National Division title with Avon Grove and Downingtown East. Coatesville finished 5-5 and did not qualify for the District 1-4A playoffs.

Dae-Hon Chueng ran for 165 yards and two scores and Manny Stocker threw a touchdown pass to Kyle Kerrick and scored one on the ground, as well. Kerrick and Dave Warner picked off Kenny Fuhrman, who was held to 29 yards on 18 pass attempts. Donte Harrell scored the only touchdown for the Whippets, who began and ended their season with three-game losing streaks to finish 4-6. Coatesville finished 8-2 in the regular season and qualified for the District 1-4 playoffs for the first time under Ortega. A lot of the same faces were back from the season before, but this year there were fireworks, with the teams combining for 932 yards. Once again, Dae-Hon Cheung and Manny Stocker tortured the Whippets. Cheung ran for 207 yards and two touchdowns, while Stocker scored one on the ground and threw for 269 yards and four TDs. Chris Jones caught two TDs and Kyle Kerrick and Farrell Boyd hauled in scores for Coatesville. Zach Barr and Donte Harrell combined for 234 yards and three TDs on the ground, and Kenny Fuhrman threw TD passes to Tony Calamaro and Harrell for West, who led twice in the game. The win secured an 8-2 record sent the Red Raiders back to the playoffs. West finished 7-3 and just missed a playoff spot. The Whippets ran into the buzzsaw known as the 2012 Coatesville team. Despite racking up 290 yards of offense and winning the turnover battle, 3-1, West simply couldn’t stop the Red Raiders, who put up 563 yards of offense. Emmett Hunt threw for 317 yards and four touchdowns — two to Chris Jones, one to Dre Boggs and one to Vinny Williams — and Daquan Worley ran for 203 yards and a pair of scores. Boggs, who had 206 yards of total offense, also scored on the ground. Tino Bunhu ran for 132 yards and all three of West’s TDs and Kyle Goodrich gave Hunt his first interception of the season. The Whippets finished 7-3 in the regular season and qualified for the playoffs while Coatesville made its way to the state championship game. Coatesville was 9-0, still riding the wave of a trip to the state championship the year before, when its hopes were blindsided. The week prior, Daquan Worley tore his ACL against West Chester East and the Whippets took advantage of his absence. Coatesville ran for just 90 yards in the game and the only touchdown was scored on defense, when Stephen Pawling returned a fumble 95 yards in the second half. West’s Jake Barr ran for 72 yards and caught three passes for 59 yards, one resulting in a TD. Nick Pagel also threw a TD to Derrick Boyer and Elijah Tinson returned a fumble for a touchdown for the Whippets. The win gave West the Ches-Mont National Division title and a home playoff game, while Coatesville was blown out by North Penn the following week in the District 1-4A playoffs.

In the regular season finale, Coatesville’s Jordan Young had a career night. He passed for a career-high 371 yards, throwing touchdown passes to Jay Stocker and James Clark, as well as running in a pair of scores. Young’s TD to Stocker came in the last minute and broke a 33-33 tie. Ahkeema Evans tacked on a pick six on West’s last-gasp effort. Jalen Hudson ran for a couple TDs and Amir Ealey had five receptions for 148 yards for Coatesville. Mike Riddick scored three times for West and Jake Barr caught a TD pass from Tyler McNulty. Coatesville completed its perfect regular season and eventually lost to Pennsbury in the district final. The Whippets finished 6-4 and nearly knocked off that Pennsbury team in the first round, but fell, 63-55. This fall in the Ches-Mont was more remembered for its regular season than the playoffs, and Downingtown West’s quest to go undefeated was tested by the Red Raiders in week five. West’s offensive line proved up for it, as the Whippets ran for 335 yards and all four touchdowns. Mike Riddick scored two of them, Jake Barr added another, and 120 yards, and Tommy Mattioni scored as well. Barr, Wayne Anderson and Braden Harper picked off Jordan Young to stymie Coatesville, who put up 437 yards of offense. The loss was the first of three straight for Coatesville, who missed the playoffs at 7-3. West won its first nine but lost to undefeated Downingtown East in week 10 and then Pennsbury in the first round of the playoffs.

It was West’s introduction to Coatesville freshman quarterback, Ricky Ortega, but this night belonged to sophomore running back, Aaron Young. The young star ran for a career-high 324 yards and five touchdowns on 26 carries. The Whippets actually led, 7-0, when Ryan Wetzel hit Cole Zapf for a 30-yard TD, but Coatesville took over from there, chalking up 420 yards of offense. West finished the season, 4-6, while the Red Raiders went 9-1 in the regular season and reached the District 1-4A semifinals.

For the second straight year, it was hardly a contest. Ricky Ortega passed for 257 yards and four touchdowns and Aaron Young scored through the air and on the ground. Avery Young caught two of Ortega’s TDs, and sophomore Dapree Bryant grabbed the other. Tione Holmes had a pick six for Coatesville, who held the Whippets to 111 yards of total offense. Mitch Micale scored the lone touchdown for West. Coatesville finished the regular season 9-1 and won its first District 1-4A title with Ricky Ortega, while the Whippets wound up, 5-5. Both teams came in with a 6-0 record, and the potential for an epic battle between Ricky Ortega and Will Howard had fans excited. The result did not live up to the hype, as the Red Raiders rolled from the start. Ortega completed just five passes, but four went for touchdowns, totaling 176 yards. Dapree Bryant, Dymere Miller, Aaron Young and Jordan Engler reeled in the TDs from Ortega, and Young ran in another pair. Howard passed for 98 yards and was injured for the remainder of the season during the contest. Ryan Wetzel took over and guided the Whippets to the District 1-4A semifinals, while Coatesville won its second straight district title. Finally, two of the biggest football communities got the heavyweight bout they hoped for the year prior. West was 8-0, but fell behind early after a Ricky Ortega touchdown run. Max Hale scored on the ground to tie it for the Whippets, but Coatesville stormed back with a TD run by Ortega and a TD pass from Ortega to Dapree Bryant. West took a 21-20 lead in the third quarter on TD runs by Will Howard. That was the last West scored, and Coatesville re-took the lead on Ortega’s third TD of the night. Ortega destroyed West underneath, completing 22 of 36 passes for 320 yards. Bryant had nine receptions for 146 yards and a key interception in the fourth quarter. After a Pierce Hadzor kicked a 27-yard field goal, Coatesville stuffed West on a fourth-and-four at the Red Raider 13 to preserve the win. The two rivals navigated opposite sides of the District 1-6A bracket to meet each other in the district championship game. In one of the biggest moments in Ches-Mont history, the Whippets and Red Raiders battled in a classic. With revenge on its mind, West jumped out to a 21-0 first-quarter lead, off a touchdown run by Will Mahmud, a fumble return by Mahmud and TD run by Will Howard. Coatesville got on the board when Ricky Ortega ran 27 yards to pay dirt, but Alex Rosano picked Ortega off later in the second and Rosano took it to the house. Coatesville cut the lead to six when Ortega connected with Abdul Stewart for an 80-yard TD and a 70-yard TD to Dapree Bryant. Tyriq Lewis scored to push the lead back to 13 before Ortega and Bryant cut it back to six on a 65-yard TD. From there, Howard took over, throwing a touchdown to Julian Williams and setting Lewis up for his second TD. Howard finished with 301 yards passing while Ortega’s historic career came to an end after a 348-yard, four TD effort. After the COVID-19 pandemic delayed the start of the season, Coatesville moved to 2-0 over West, who was playing its season-opener. Coatesville sophomore quarterback, Harrison Susi, ran for 145 yards and two touchdowns and Dametrius McClain-Jackson added another 83 yards and a TD. West led, 14-7, at halftime, thanks to a 40-yard TD pass from Evan Wickersham to Elijah Ford and a TD run by Nahsir Harris. Coatesville finished the abbreviated regular season, 4-0, before losing to Pennridge in the District 1-6A semifinals. West finished the season, 2-2. In a trying season for West, the Whippets nearly found some redemption in the week seven battle. The Whippets led this game, 28-18, with 4:34 to go, but Harrison Susi had some magic up his sleeves. Susi found Tommy Ortega for a 12-yard touchdown to cut the lead to four, and after a failed onsides kick, Coatesville forced a three-and-out on West’s next possession. With 13 seconds to go, Susi hit James Taylor for a 19-yard TD to steal the win from the stunned Whippets. Evan Wickersham ran for two TDs and John Mulville scored on a run and a kick return. Susi threw for 163 yards and ran for another 154 and two more scores, while Dowayne Molina recorded the other TD for Coatesville, who returned to the District 1-6A final later that fall. West settled for a 5-5 record.