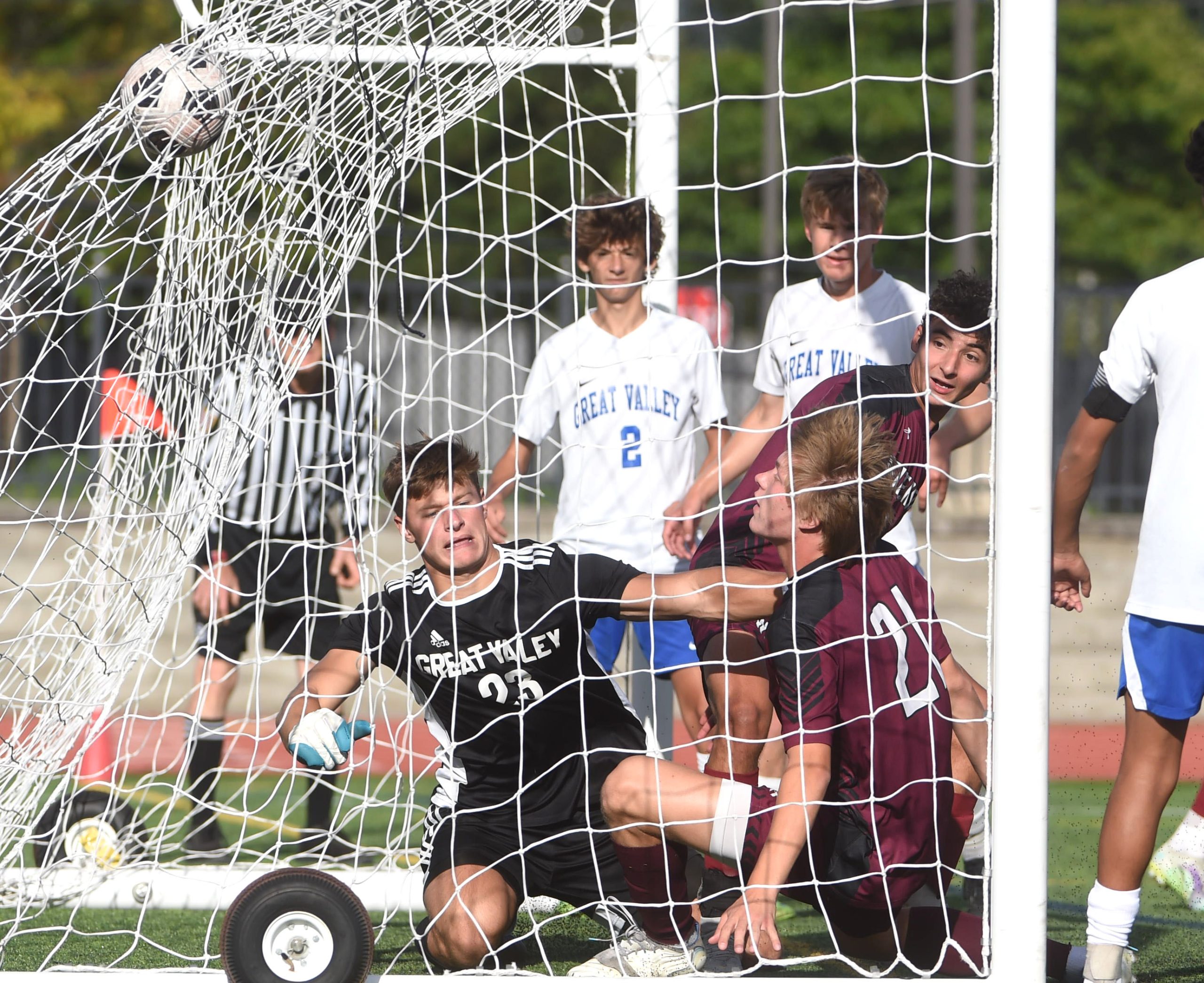 DOWNINGTOWN >> Shutout and outscored by nine goals in its previous two Ches-Mont soccer outings, it would have been easy for the Great Valley boys to roll over against unbeaten Downingtown West on the road Thursday.

But that certainly didn’t happen. Bolstered by an early goal, and backstopped by senior goaltender Seth Turner, the Patriots went out and shocked the Whippets, 2-1, to add a little more intrigue into the league’s title race.

“This is the best we’ve played all season against one of the best team’s we’ve faced,” said Great Valley head coach Dave Moffett. “What you want to see is them rise to the occasion, and they definitely did.”

“The loss to Rustin was a wake-up call, we talked some stuff through and today we came out and played hard,” said senior midfielder Ved Law.

“We started our season 5-0 and then took a couple losses,” Turner added. “We knew this was a tough opponent but we rallied and we got it done. I am so proud of the guys. Our energy and focus has been struggling, but today you could tell our guys were locked in and ready to go.

“The energy in this game was probably the best it’s been all season.”

“Unfortunately we didn’t show up for the first half,” said Whippets’ head coach Joe Sales. “We were down 2-0 and we struggled to cope with it.”

Everybody agreed that a great start really benefited the Patriots. Less than five minutes in, senior Jordan Cabrera made it 1-0 when he raced to a loose ball and got there before West keeper Christian Capone.

“We played the ball through, Jordan got behind the defense so it was essentially a breakaway,” Moffett said.

The Whippets had several opportunities to tie it in the first half, including three shots by senior forward Matt Lohr. Two hit off a post and the third was grabbed by a diving Turner.

“West is a very good team with quality across the board,” Moffett said. “We were lucky enough to get that early goal, which we know changes the psychology and mentality of kids, especially ours with confidence (issues).”

It was 1-0 at the half, and the two teams each had five shots on goal.

“A common theme with this team is that sometimes when we give up a goal, the heads go down, and things go bad from there,” Turner explained. “So the fact that we got the goal early, we realized we are just as good as (West).”

Just eight minutes into the second period, the Pats notched what would end up being the game-winner. Senior Rikin Rakesh unleashed a shot that bounced off the corner of the crossbar and a post, and Law was there to head-in the rebound.

“Rikin did tremendous work to the get that shot off, and Ved was there to head it back in,” Moffett said. “It was great anticipation by Ved.”

It took the Whippets a while to recover, but they finally got one past Turner with 18:12 to go when senior Alex Ade finished off a scramble in front of the net. And for the rest of the way, West had several chances to tie it, including a trio of corner kick opportunities, and another diving save by Turner on a blast by Ryan Hinckle.

The Whippets pushed to the very end and earned a free kick with 5.2 seconds on the clock. But Turner had no trouble dealing with the kick by Lohr.

“I know how good of a player Matt Lohr is,” Turner said. “I was ready – I wanted to make that highlight save. I don’t know what his plan was, but it wasn’t the hardest save for me.”

West was number five in the District 1 4A Power Rankings heading in, but is sure to drop. The Whippets had a slight edge in shots (11-9) and corners (5-4).

“Things just didn’t fall our way, and (Great Valley’s) keeper played well,” Sales said. “He must have had seven really good saves where he had to fully stretch out to get them.

“Our guys know they didn’t perform, and it was a lot of the little details – like communication, getting the 50-50 balls, working together. In the first half we were playing on an island.

“The guys brought it in the second half, but it wasn’t enough.”

“We came out and showed what we can do. People can underestimate us as a team, but today we showed we can play,” Law said.

“We have been very much a Jekyll and Hyde-type team,” Moffett added. “Today we played at our absolute best. A week ago (versus Henderson), we were at our absolute worst.

“Now it’s trying to build that consistency. A game like this gives them a belief that they can play with anybody in this league.”