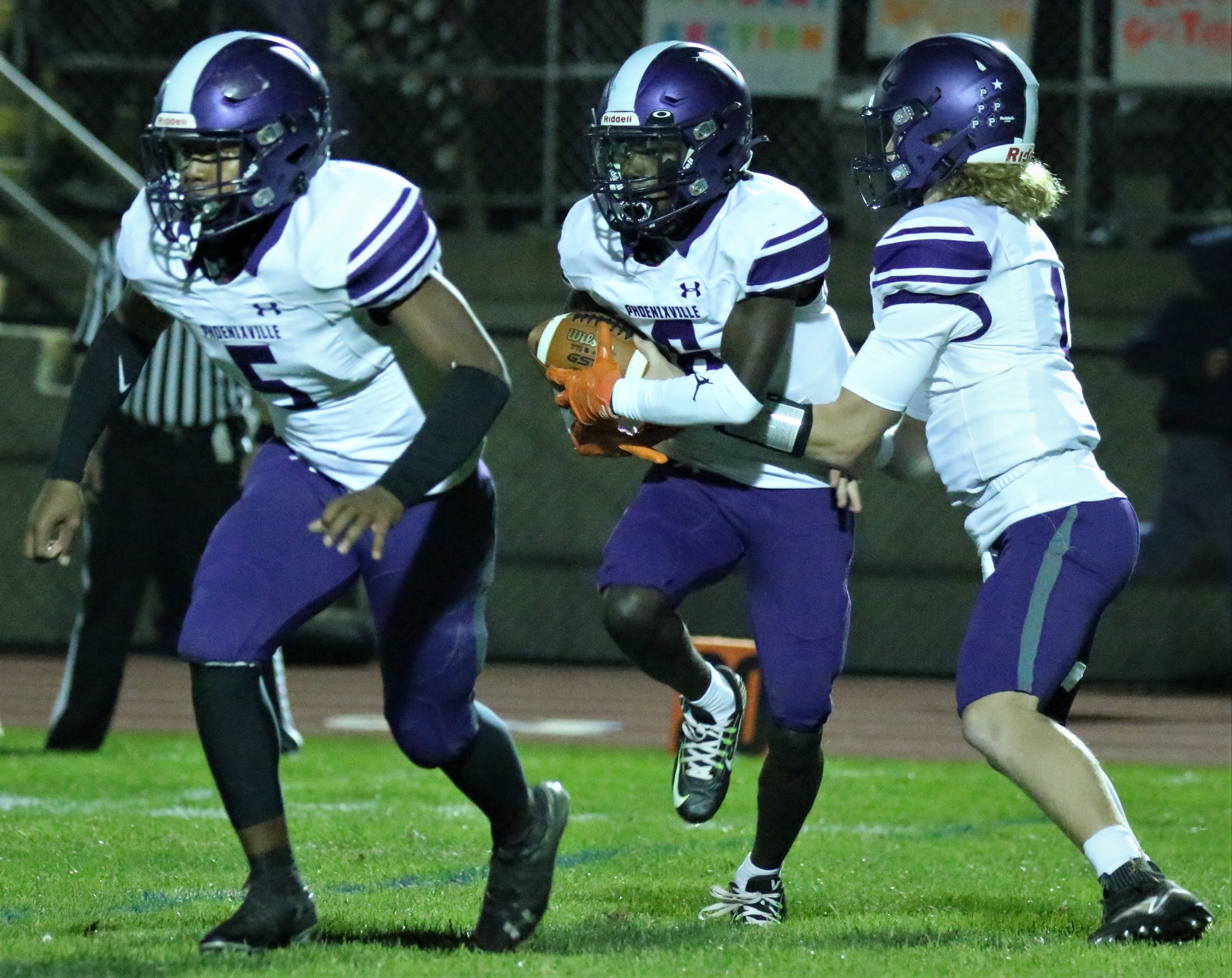 Phoenixville quarterback Talon Romance, right, hands off the Ahmid Spivey, center, as Darius Watson, left, looks to make a block on a play against Pottstown on Sept. 30. (Courtesy Rick Martin)

It’s hard to imagine a more deflating start to the 2022 season than Phoenixville’s.

The team saw one of their big goals for the year – beating Great Valley for the first time in a decade – fade away in a late Patriots comeback. What’s worse, after the game the Phantoms found out they’d lost quarterback Ty Romance for the season due to injury.

Resilience is an admirable quality, but the team could almost be forgiven if they’d taken at least a couple weeks to recover from such setbacks. Instead, the Phantoms overcame their early obstacles and now stand at 4-2, tied for first place in the PAC’s Frontier Division after Friday’s 35-7 win over Pottstown.

After the Great Valley loss, the first task for coach Anthony Ciarlello was naming a new starting quarterback. Fortunately, he had a good idea where to look.

Sophomore Talon Romance – the younger brother of the injured Ty Romance – has stepped admirably into the role, completing 55 percent of his passes for 700 yards and eight TDs over the past five games. Talon and wideout Ahmid Spivey have formed one of the PAC’s premier big play duos, with Spivey accounting for about half that yardage (363 receiving yards, to be exact) and five scores on only 12 catches.

But behind the scenes, big brother hasn’t gone anywhere. “Ty is at practices and games, and he is a calming presence for me,” said coach Anthony Ciarlello.

“When Ty and Talon eat dinner at home, they’re talking about football. When they wake up each morning, their first conversation is about football. Walking into school, on the way home – they’re together, and they’re probably talking football.”

“It was very competitive between the two of us at first,” said Talon Romance. “We pushed each other, made sure we were both in the weight room during the offseason.”

Ciarlello said he had zero hesitation to place Talon in Ty’s position after the injury. “They live and breathe this sport,” he said. “They’re like A, and A-1, in terms of their dedication to the sport, to this school, to their team. They love being Phantoms, and you see that in how they practice and work with coaches and teammates.”

“Of course I’m disappointed after my injury,” said Ty Romance. “But if I’m going to watch someone else play quarterback, I’d rather it be [Talon] than anyone else.”

Joining Talon in the backfield is junior Sam Moore, a consistent presence all season at running back who had his breakout game with 146 yards and a score Friday, vaulting him up among the conference leaders in rushing yards. Darius Watson ran for a pair of scores, and on a night where the ground game was the focus the explosive Spivey still found a way to contribute, taking a carry 57 yards for the eventual winning touchdown. The Phantoms can beat teams in a number of ways, and with the exception of Spivey and lineman Jude Daly most of their offense has at least one more season at Phoenixville.

Q2, 7:21 — Phoenixville beginning to pull away in the second quarter.

Sam Moore breaks out on a 37-yard run to the house and he’s now up to 110 rushing yards on seven carries.

Juniors Danny Aselton, Shane Callen, and Jamie Gray Jr. and sophomores Andrew Kirk and TJ Howard are joining Daly in paving the way for the increasingly diverse offense that ran for nearly 300 yards on Friday and has averaged 35 points per outing in the Phantoms’ four wins this season. “Those six guys, and others, have been in the weight room every day this the start of the year. They’re relentless,” said Ciarlello.

Line coach Bubba Gray (father of Jamie) has worked tirelessly rounding the young offensive line into a cohesive unit able to set the foundation for the explosive passing game, the power running game and everything in between.

Defensively, Ciarlello has focused on fixing mistakes and putting together a defense-by-committee. “We rotate so many guys – we’re very sophomore, junior heavy. We have a couple of seniors who play both ways, and our hope is to improve defensively every game.

“We just want to score more than the other team. Forcing turnovers, flipping the field – we aren’t a shutdown unit, but we just focus on limiting the other team’s scoring.”

The next big challenge comes on Friday, when the Phantoms travel to Pottsgrove in hopes of moving to 3-0 in the Frontier Division and staying on track for earning the right to set some postseason goals.

“We’ve been in a bad place football-wise for so long,” said Ciarlello. “When we play Pottsgrove – we haven’t beaten them in 17 years. Winning the PAC title, playoff games – things like that aren’t our goals because we haven’t had a winning season in 10 years.”

“If we can have a winning season, that creates the ability to have bigger goals. The little things, like not living at .500 year after year – allows us the possibility of setting bigger goals in the future.”

Boyertown evened their record at 3-3 with a Saturday win at Norristown, 42-7. The Bears got the running back on track after a lackluster outing at Spring-Ford last week, as both Cole Yesavage and Jason Oakes went over 100 yards on the ground. Yesavage also added a 40-yard receiving score.

Will Fish and Jake Stewart led the respective running games for Spring-Ford and Perkiomen Valley, as both squads improved to 2-0 in the Liberty Division ahead of their Friday night showdown. Fish gashed Owen J. Roberts’ defense for 160 yards and a score in a 37-20 win, while Stewart’s night ended early as the Vikings built a 49-0 halftime lead against Methacton en route to retaining the Battle Ax. His 93 yards and three scores on just 11 carries went a long way towards building the insurmountable advantage.

Pope John Paul II remained undefeated, conquering Pottsgrove 35-7. An almost perfectly balanced offense (171 rushing yards, 167 passing) led the way for the Golden Panthers, but the real story was a defense that held Pottsgrove to only 61 yards of offense and accumulated four sacks.