White powers Hill School past Academy of the New Church 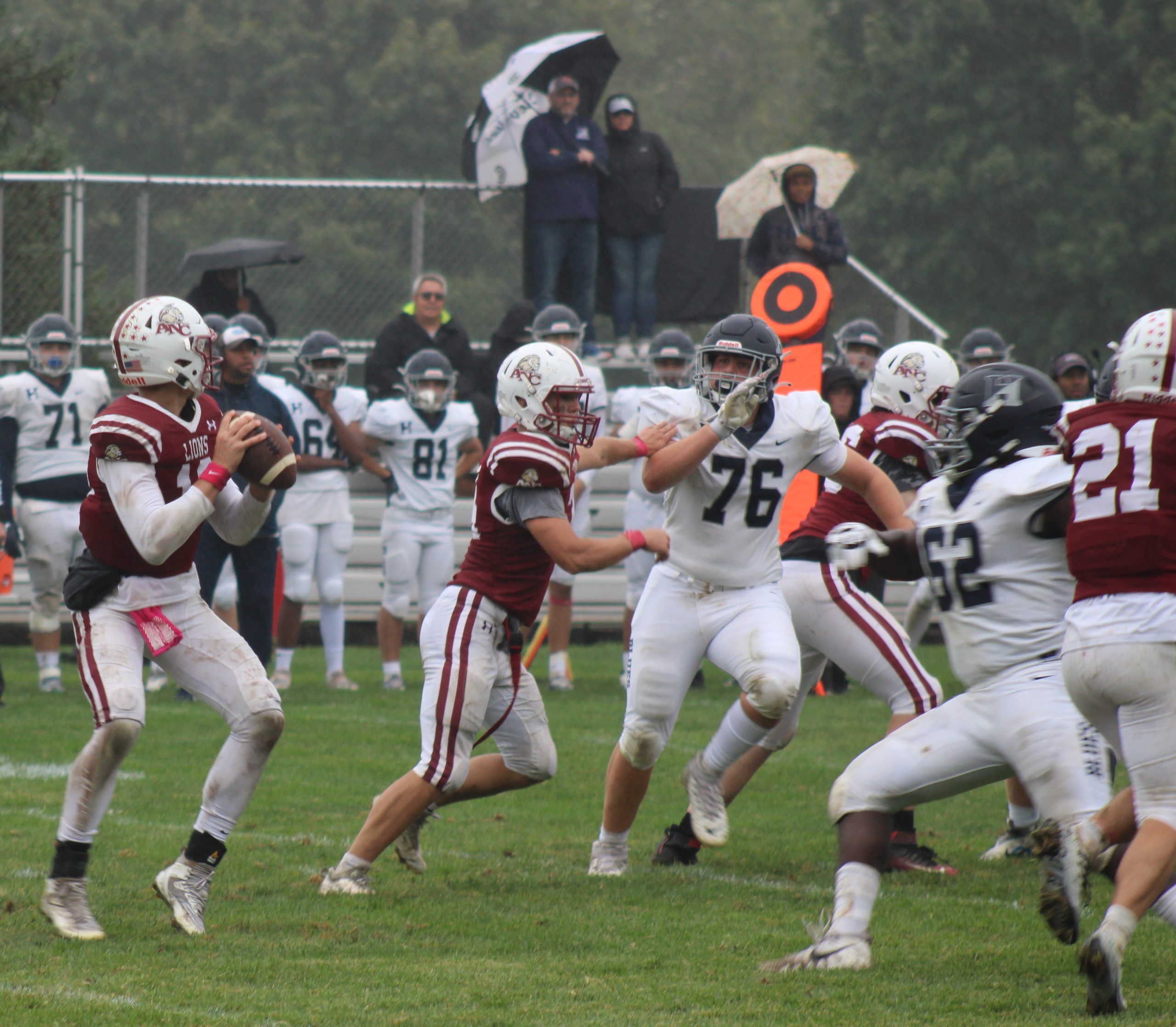 BRYN ATHYN >> Kayden White rushed for 177 yards and two touchdowns as The Hill School hit its winning stride, powering its way to a 30-13 victory on a rainy, windy afternoon at The Academy of the New Church.

“It feels so good. Starting off 0-3 isn’t the best feeling but getting that first win and then rolling with it — that’s what we’re working for,” said a smiling White, who had a 57-yard run on the Rams’ first offensive play of the day.

“We have a lot of potential,” White said. “We got to see some of it today, and I think there’s more that we can do to get better.” Hill School’s Kayden White was a driving force in the ground game in a win over Academy of the New Church on Saturday, Oct. 1, 2022. (Kev Hunter/MediaNews Group)

Hill looks to carry the momentum into next Saturday’s 2:30 p.m. home contest against Peddie School (N.J.).

White’s big burst on the first series set up his own 13-yard touchdown run. The extra point attempt was blocked, leaving the margin at 7-6 after ANC had driven for a score on its opening possession.

The Rams went in front for good late in the first quarter, when Tristan Reynolds made a few cuts and weaved his way through traffic, sprinting away to a 78-yard punt return for a score. A two-point run by White made it 14-7 Hill. Hill School players get ready for the second half against Academy of the New Church. (Kev Hunter/MediaNews Group)

The Rams scored on all three of their first-half possessions.

White powered in from four yards out to make it 20-7 early in the second quarter, and then just before the half, Maxwell Elmore booted a 25-yard field goal to make it 23-7 at the break.

Said White of the strong start: “The o-line did a great job. (Putting together long drives) is what we were working on all week. We had a great week of practice so I’m glad that it payed off.”

The Rams put the game out of reach on their opening drive of the third quarter.

A 48-yard connection from Charles Hewitt to Jake Voynar led to a two-yard touchdown run by Zachary Zindle, making it 30-7.

Zindle contributed 43 yards on the ground in the victory. Despite the loss, ANC’s passing attack continued to click.

The Lions came out and put together an eight-play, 74-yard drive. Hunter Aquino made a pretty grab in the end zone, going up and getting a 12-yard toss from his brother, quarterback Conner Aquino, to make it 7-0 ANC.

Hunter Aquino finished with nine catches for 137 yards, and Conner Aquino completed 14 of 22 passes for 160 yards and a pair of touchdowns. The second came when he hit Cole Brown for a four-yard TD in the third quarter. “Conner’s worked really hard to become a good quarterback,” coach Ty Klippenstein said. “And he’s got a lot of the talent to do it. And the ball was wet – it’s hard to do some of the stuff he was doing. And pressure was coming at him. So he faced those challenges, took on hits, and he kept making some good throws.

“And with Hunter, you can see some of the athleticism that he has. For somebody who is 6-foot-6 and is able to catch the ball and the radius that he has – and also he can move, that’s a pretty nice combination. So he’s a big threat for us.”

ANC is in action again next Saturday, at home at 1 p.m. against Canada Prep.