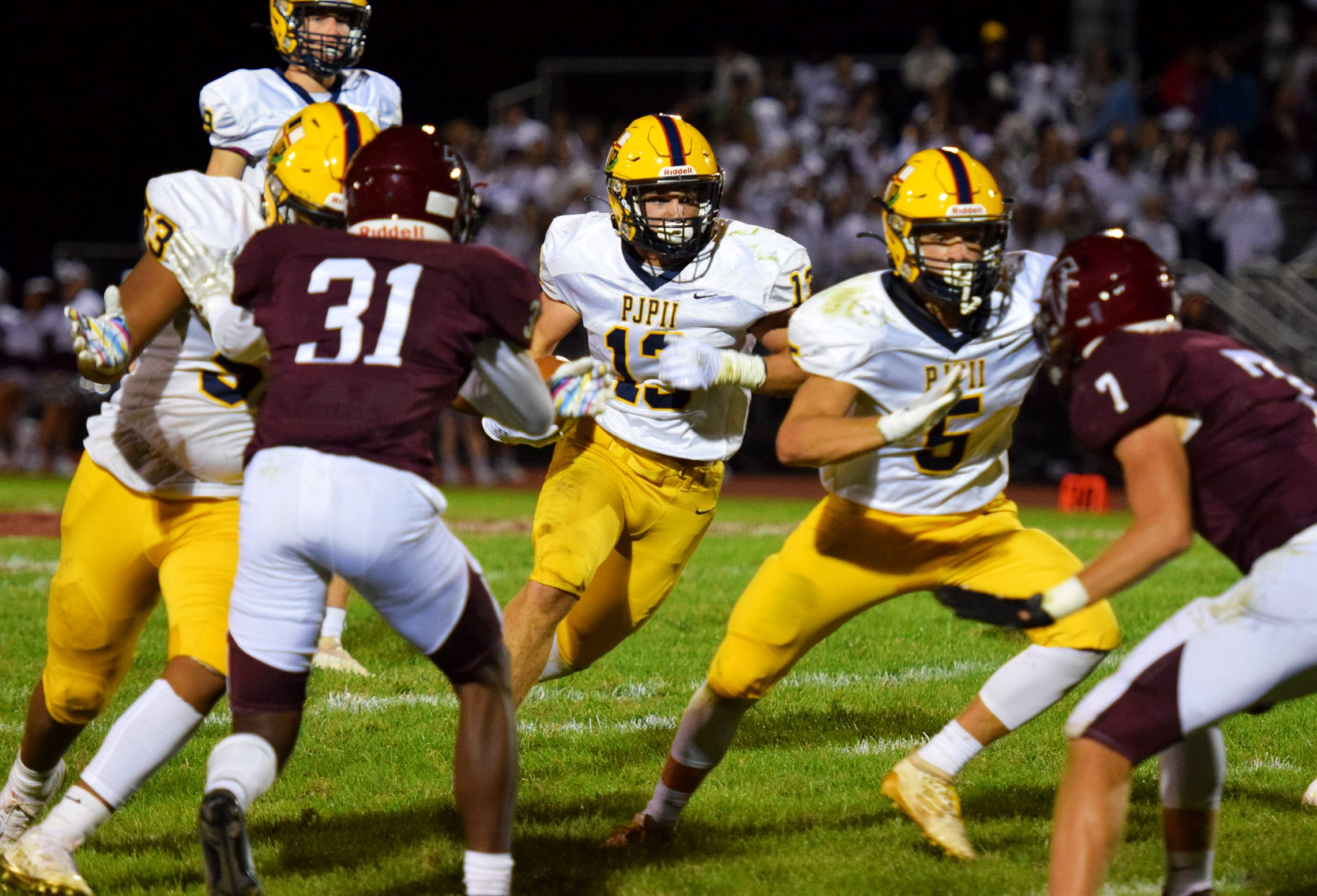 LOWER POTTSGROVE >> It can be a two-edged sword, the perfect start to a high school sports season.

Alongside the joyful euphoria of the winning run can be the pressure of keeping the streak going, be it self-induced or generated by people on the sidelines. That’s the situation Pope John Paul II is experiencing this fall, and it is taking a common-sense approach to addressing the matter.

“We’re taking a 1-0 mentality each week,” Golden Panthers coach Scott Reed said following Friday’s game with Pottsgrove. “Every game is so hard to win. It’s not what you’ve done, it’s what you’re going to do. You can’t dwell on wins and losses.”

To their credit, the Golden Panthers haven’t had to dwell on losses this fall. That trend continued at Rick Pennypacker Field, Pope John Paul II rolling up a 35-7 win to remain unbeaten in the Pioneer Athletic Conference’s Frontier Division and for the season.

The record will show the Golden Panthers (2-0 division, 6-0 overall) got big offensive efforts from from Boyd Skarbek and Luke Terlesky in the latest installment of a matchup that routinely goes a long way toward deciding who will be atop the Frontier Division standings. The O-line cleared the way for Skarbek to cover 142 yards on 19 carries and score four times. It also gave Terlesky time to complete 11 of 17 throws for 167 yards and another touchdown.

“I’m proud of the guys up front,” Reed said. “They battled up front.”

Pottsgrove closed on the Golden Panthers in the second quarter, Gabe Rinda’s 18-yard pass to Bryce Caffery cutting into Pope John Paul II’s initial 15-point lead. But the home team managed just two first downs the rest of the way, had a punt blocked inside its 20-yard line and a ball stripped around midfield, enabling the Golden Panthers to run the clock out for the better part of the fourth quarter.

“PJP did all the things they have to do right,” Pottsgrove coach Bill Hawthorne said. “They were clearly the better team tonight. We didn’t, and that’s on me.” The Rinda-to-Caffery aerial connection was the highlight of the Falcons’ passing game, which was 5-for-15 for 55 yards. Their running game was headed by Anthony Mayes, who rushed for 20 yards on 16 tries.

In the meantime, Pope John Paul II flourished on the ground through Skarbek’s workmanlike effort. He had touchdown runs of three, 19, 10 and six yards, adding 49 yards on two pass completions.

“Boyd does things you can’t coach,” Reed said. “His talent is unique, and he has a great skill set.”

Through it all, he kept attuned with the team’s one-at-a-time mantra. The Golden Panthers’ defense featured sacks of Rinda by Skarbek, Brendan Kenning, Makel Parker, and Albeck; and Lake’s strip of Rinda. A big play by the special teams was T.J. Boccella’s block of a Pottsgrove punt attempt in the third quarter.

“We didn’t take Pottsgrove lightly,” Skarbek said. “We had a short week of practice with no days off. We’re thinking week to week.”
The task for the Falcons now is to regroup and focus on getting back on the winning track.

“We have to take care of business,” Hawthorne said. “The things we talk about have to translate on the field.”

No less an authority like iconic Pottsgrove former coach Rick Pennypacker noted PJP’s win at Pottsgrove was the first there by it or legacy school St. Pius X since the late 1980s.

Braden Reed was Terlesky’s main target, the duo hooking up on five pass completions for 79 yards.