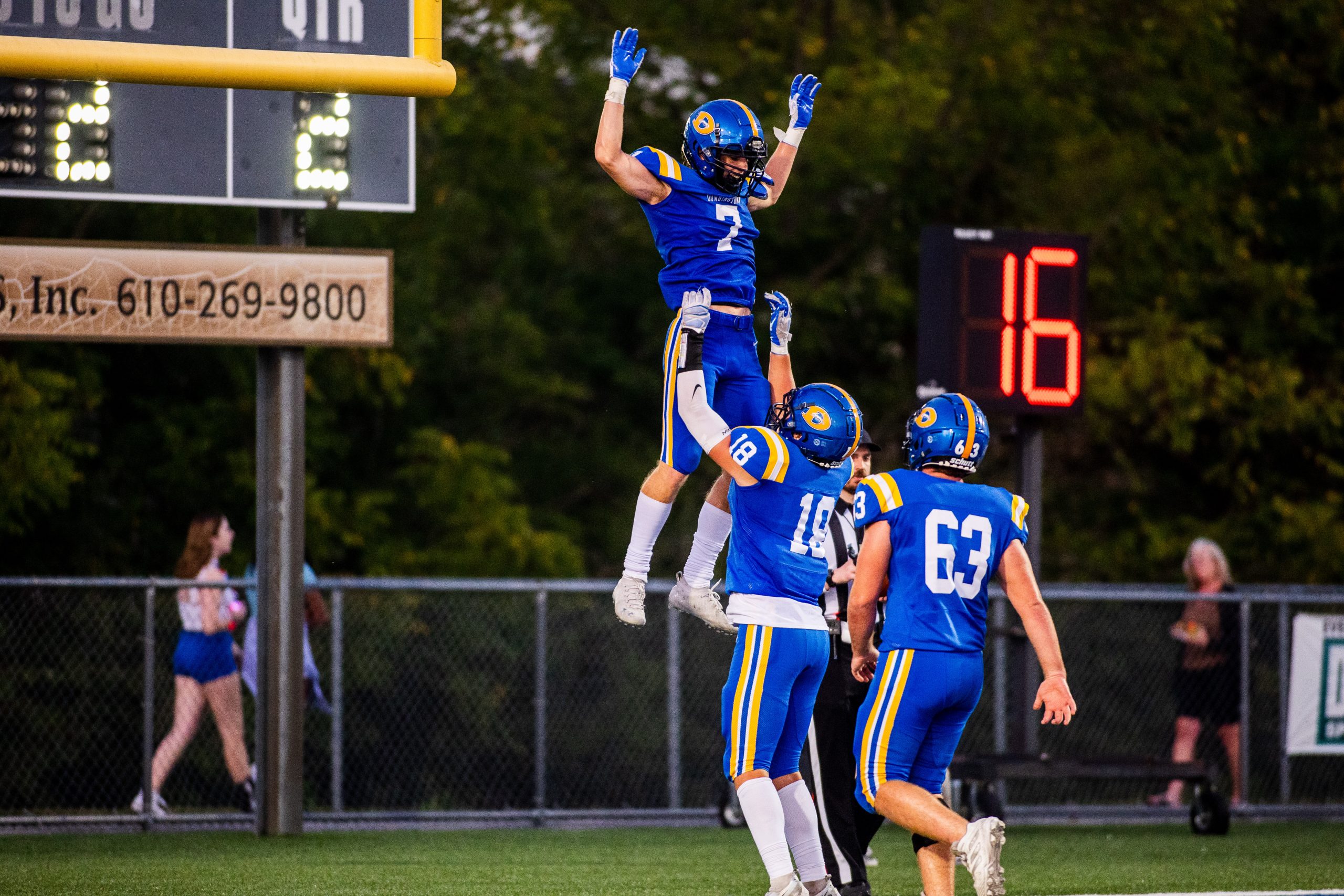 DOWNINGTOWN >> With consequential games on the horizon, the Downingtown West football team wanted to keep its focus and stay on task against winless West Chester East on Friday.

Scoring touchdowns on seven of their first eight first-half possessions will do the trick just fine as the Whippets used a three-touchdown performance from John Mulville to roll to a 49-14 victory over the Vikings in a Ches-Mont League crossover game at Kottmeyer Stadium.

“We wanted to make sure we bullied them up front and I think we did that,” said Mulville, who had 145 yards on 11 carries — all in the first half. “The O-line really made it easy and all I had to do was run through it. I think our team is getting pretty disciplined and we’re maturing as the weeks go on, so we kept our focus and played well.”

Downingtown West didn’t have to go to clock-churning long marches against East. Its scoring drives consisted of 2, 5, 1, 5, 4 and 5 plays.

After stopping East on its first drive, it appeared that the Whippets scored as Jake Kucera brought back a punt 52 yards for a touchdown. But, the play was brought back following a block in the back penalty.

That didn’t slow down the Whippets very much. On their first play from scrimmage, quarterback Quinn Henicle hit a wide open Dean Hangey for a 52-yard pass play to West Chester East 12. Mulville popped open on the next play and 12 yards for the score and a 7-0 lead.

Another three-and-out from the Vikings set the Whippets on their own 37. Henicle had the big play with his legs as he scrambled into the open and kept going until he was brought down for a 47-yard gain to the East 8. Two plays later, Henicle plowed in from the one and a 13-0 lead.

The most eye-popping play of the evening came the next time the Whippets had the ball. On first down, Mulville broke through the middle and raced 59 yards for a score and push the lead to 20-0.

“I can’t really tell you what happened, to be honest, all I know is I wasn’t touched,” said Mulville.

East’s third three-and-out in its first four possessions gave the Whippets the ball back. Off they went on another scoring drive, going 35 yards on five plays. Mulville went in from the 10 for third score of the night and a 27-0 advantage — all in the first quarter.

The misery continued for East as the Whippets made it 35-0 as Henicle found a wide open Hangey for a 63-yard touchdown. Mulville converted on the two-point attempt.

West ended its portion of the first-half scoring binge as Harrison Hayford rambled in from the eight to make it 42-0.

The Vikings got on the board with 2:28 left in the half. QB Nathan Derosa found Tyler Wileczek for 45 yards and the score as East ended the half on a positive note.

East went on a 9-play drive the first time it had the ball in the third quarter. Its first team was in against the West reserves and the Vikings moved the ball and Mitch Ragni burrowed in from the 1.

West finished the scoring near the end of the game, quarterback Tommy Miller went in from the two to cap the night.

“It’s a great start,” said West coach Mike Milano. “We had a great week of practice after a bad week. But, I’m proud of the kids.”

While being known as an offensive coach, Milano was jazzed by his defense. They held Ragni, one of the top running back in the area, to just two yards in the first half.

“He’s a dude,” Milano said of Ragni. “I’m more excited about the way our defense is playing. We’ve been getting after it. The kids have been playing fast and physical. I’m excited about that.”

Both teams are on the road next week, The Whippets go to Coatesville in one of the games of the year, while the Vikings visit Sun Valley.