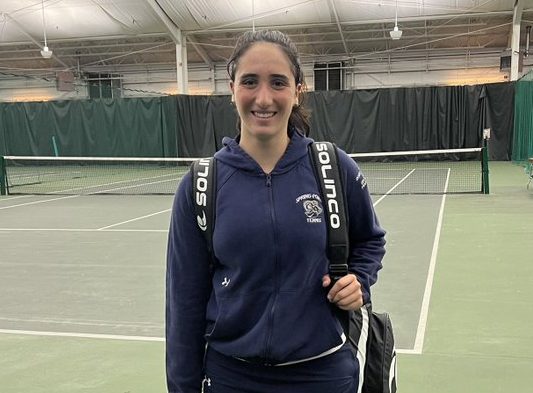 Owen J. Roberts junior Allison Root and Spring-Ford junior Mia Matriccino both advanced to the semifinals and clinched spots in the PIAA Tournament Friday at the Springfield YMCA.

Three-time PAC singles titlist Matriccino won 6-1, 6-1 over Bishop Shanhan’s Ella Matulewicz in the second round and 6-0, 6-1 over Souderton’s Amanda Yang in the quarterfinals.

She will take on Council Rock South’s Dasha Chichkina in the semifinals.

Spring-Ford’s Cady Krause reached the second round with a 6-1, 6-0 win over Upper Dublin’s Ciara Peyton. She ran into No. 1 seed Li of Unionville and fell 6-1, 6-0 in the quarters.

Methacton’s Lauren Montgomery and Spring-Ford’s Evelyn Mejia fell in the first round, as did Upper Perkiomen’s Hope Thompson in Class 2A.

The tournament concludes on Saturday.

OJR got another high finish from boys competitor Andrew McGonigle in the boys’ Brown race. McGonigle placed 8th in a personal-best 15:14.9. The area’s highest team finisher was Spring-Ford in 15th, led by Ryan Kovaleski (15:49.8).

Christian McGillen scored two goals including the game-winner in a 2-1 win for Upper Perkiomen over Upper Merion. Jim Friedman assisted the overtime goal while McGillen’s first came off a feed from Ethan Barr.

Matt Choi charged into the box and knocked in a loose ball in the first half for the only goal in Friday’s PAC Liberty Division matchup. The Bears had the better of the play in the first half as PV managed only one shot. That changed in the second half as the Vikings put on the pressure, but Boyertown keeper Brayden Risser came up with multiple big saves to preserve the lead.

Nate Stewart scored a hat trick and added an assist in a 7-1 Phoenixville win over Pope John Paul II. Efe Ulcay (three assists), Mike Sposato, CJ Jahn and Max Khazen all added a goal each for the Phantoms. Jack Illig and Nate Stewart added assists while Jason O’Neill came up with two saves in net for Phoenixville.

Ben Rubinich had an unassisted goal in the second half to put the Golden Panthers on the board. Jason Krum made 10 saves for PJP.

The Phantoms scored twice in each half of their PAC Frontier Division match Friday afternoon at PJP. Golden Panther goalkeeper Kyanni Escudero made eight saves.

Alina Friz scored in the ninth minute and Harper Glennon in the 38th minute to give the Bears a 2-0 lead at the half in the PAC Liberty Division match Friday night at PV. Giavanna Marciano broke up the shutout off an assist from Rain Boyd with three minutes to go.

Olivia Hulayew had four saves for the Vikings and Ciera Cameron made three for the Bears. PV had a 7-3 advantage in corner kicks.

The Warriors ran out to a 6-0 lead at halftime in a PAC crossover match. Renee Blake had two goals and Nicole Uebele dished out four assists to lead Methacton. Other Warriors in the scoring column included Carmela Maro (1 g), Elena Weychert (1 g), Lea DeWan (1 g,1 a), Lily DeWan (1 g), Maddy Baker (1g) and Ceci Rehak (1 a).

Reese Doan scored twice for the Vikings and Rylie McGrath and Chloe Wardiaw knocked in a goal each with McGrath and Ashley Evitts each recording an assist. Methacton had a 16-4 advantage in corners.

Boyertown and Pope John Paul battled to a 2-2 draw. Cate Mink scored both goals for the Golden Panthers. Gi Manza made 23 saves for Pope John Paul II while Mere Cyr had a defensive save.

Peyton Shellaway and Katelyn Dulin both scored for the Bears. Boyertown outshot PJP 22-4 and had 18 corners to the Golden Panthers’ one.

Naomi Clauhs had 19 kills and 13 digs, Olivia Wusinich 11 assists and 11 digs and Lola Coulter nine kills for the Vikings in the PAC Liberty Division contest Friday night at Spring-Ford.

Carly Little made 11 kills, served two aces and had a pair of blocks in a straight-set win for Boyertown over Hatboro Horsham. Sabrina Falzone served seven aces and made eight digs.