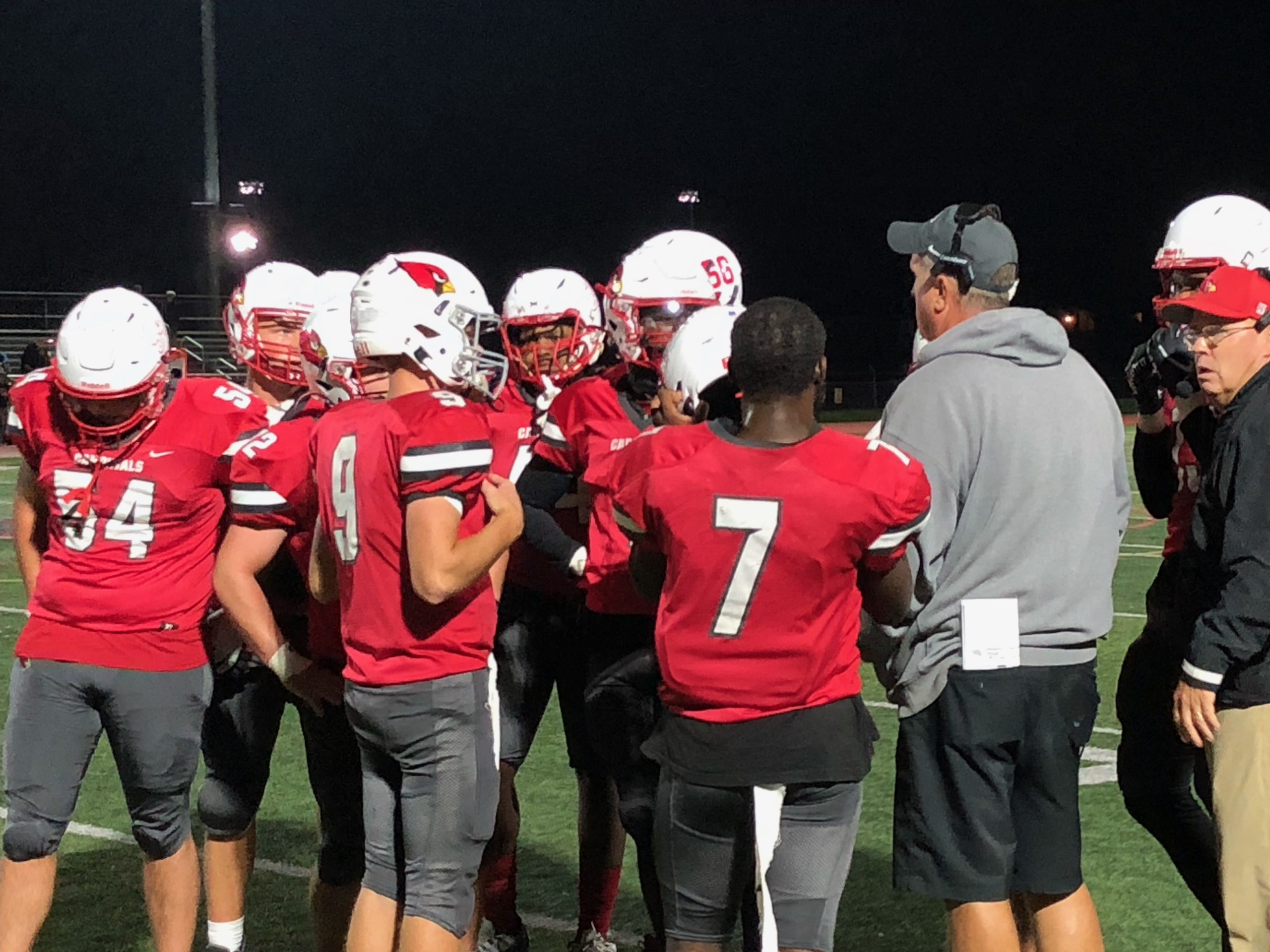 UPPER DUBLIN >> Before every game, Nyfise McIntyre always has some jitters but Friday night felt different.

For some reason, the Upper Dublin senior running back couldn’t shake the bad feeling in his gut walking up the ramp that leads the team into Cardinal Stadium. Once the game actually started and as soon as the Cardinals kept putting the ball in his hands, that all went away.

McIntyre rushed for 169 yards and three scores in just one half while the UD pass rush created havoc as the Cardinals romped over visiting Council Rock North 41-13.

“Honestly, at first, I kind of felt a little iffy about everything, I didn’t think it was going to go well,” McIntyre said. “My stomach was rolling for some reason, I don’t know why. That happens to me every game, not like that, but once that first kickoff went off, I felt good.”

Perhaps that extra-uneasy feeling was a sense of responsibility. In last week’s win at rival Wissahickon, the Cards lost senior tight end Coleman Zamborsky and senior running back Tawfiq Bartlett – the other half of the backfield hammer with McIntyre – to injury with both sitting out on Friday.

McIntyre figured he would see more carries, especially with the Cardinals (6-0) looking to set the tone early with their running game and the 5-foot-10, 185-pound senior wanted to make sure his sidelined teammates had nothing to worry about. A pre-snap pep talk from quarterback Colin O’Sullivan and a 16-yard rip on his first touch was all McIntyre needed to get going.

“The first play in the huddle, my teammates picked me up, they looked at me and said ‘let’s go,’ so I knew it was time for the game to start,” McIntyre said. “Colin’s been a friend of mine since we were little, I knew he had that arm and he knew I could run the ball. I believe in him and he believes in me. I feel bad for ‘Fiq, I’m going to do this for him, that’s my best friend.”

In football, a 100-yard game on the ground is a benchmark for a very productive night by a back. McIntyre was at 100 yards before the first quarter ended and impressively needed just 16 carries to his his total for the night before spending the second half on the sideline with the other starters.

His shortest run, a 1-yard carry, and his longest at 53 yards both went for touchdowns. His second touchdown, the 53-yarder on his final carry, was a terrific play with McIntyre taking a pitch off the right side before hitting a sharp cutback to the left side to find daylight and outrunning everyone to the endzone.

“I saw too many people on the right hand side,” McIntyre said. “I feel like have good vision when it comes to me running the ball, I saw that left open so I just went to it.”

McIntyre, who almost always required two or more tacklers to stop Friday, said his mindset on every carry is “just get to the endzone.” As a senior, the running back said he really wants to prove himself this fall and hopes to parlay a big season into the opportunity to play in college.

“He’s got nice vision and he doesn’t get a lot of credit for his vision,” UD coach Bret Stover said. “He’s a patient runner too, maybe not the fastest runner we’ve had here at Upper Dublin but he’s one of the more patient runners we’ve had. When you run behind (Riley) Hackett, (Kyree) Butler and company, if you’re patient, they’re going to get on their man and you just have to find the cut.”

By halftime, which saw the Cardinals ahead 41-0, the home team had run 22 times for 218 yards and five touchdowns with Dominick Paone finding the endzone twice on the ground. Hackett, Butler, Alex Rossman, Bill Brightcliffe and Christian Holland opened a lot of holes up front.

“Mark Schmidt’s done a real nice job with our offensive line and the kids have really bought into it,” Stover said. “It was a transition from coach Eric Taylor, who was with me for 20 years and was an awesome offensive line coach. It’s a little different philosophy with Mark, it took a little while to buy in but now that they’ve bought in, we’re going the right direction.”

By the second quarter it had become a matter of when, not if.

After bottling up hard-running CRN (1-5) back Gavin Papp, the Cardinals’ defensive front was able to really get aggressive going after CR North quarterback Julian Matera. The Indians aren’t a pass-heavy team to begin with, usually relying on play-action and misdirection with Papp to set up screens or throws downfield, so limiting that meant Matera had a lot of red jerseys in his face.

UD’s front four seemed eager to roost in the backfield too, with the pressure netting three sacks and three interceptions while holding CR North to 15 total yards of offense and two first downs before halftime.

“(Defensive coordinator) Dave Sowers does a great job getting our kids ready and our front four, it’s nice because we don’t have to bring a lot of pressure to get pressure,” Stover said. “If you get pressure with the front four, with the guys we have back there covering with coach (Ed) Wall shutting them down, we’re getting better every week.”

Riley Hackett, Kyree Butler, Shyne Roberts and Nyles Bunn-McNeill are UD’s own version of the fantastic four up front. Butler is big and strong, Hackett has a lot of fire in his game, Roberts can seemingly disappear and re-emerge in the backfield right on top of the ball and Stover pointed out how Bunn-McNeill’s mixture of athleticism and seemingly unending wingspan even gives O’Sullivan trouble trying to throw over him in practice.

On Friday, Roberts and Bunn-McNeill each had sacks while Hackett grabbed the first interception of his high school career picking off an intended screen pass in the second quarter.

“First pick I’ve ever had, it was an awesome experience,” Hackett said. “I saw the running back moving at the line of scrimmage, so I knew it had to be a screen so I saw the ball, I saw my opportunity and went up and got it.”

Martin Campbell also had some nice reps up front, his pressure forcing a rushed through that Dominick Paone intercepted for his fourth pick in the last two games. Paone also had a role in UD’s first interception, laying a big hit on a receiver as the ball got there and forcing a pop-up that Ryan O’Sullivan secured.

Griffin Pensabene also had a sack in an instance of Upper Dublin sending extra rushers but for the most part, the Cardinals can rely on the front four to just get after it.

“We need to just get off the ball, execute and do our jobs,” Hackett said. “It’s been working so far. We have a lot of faith in our coaches. The four guys up front, we’re like family, we were working out a lot over the summer and working on a lot of those things so it’s definitely been paying off during the season.”

For the second week in a row, Upper Dublin’s reserve players got plenty of reps.

Stover pulled all his starters at halftime, giving the back-ups and swing players a chance to get in. It’s an opportunity the UD coach never takes for granted, especially with injuries forcing players like Martin Campbell and Ryan O’Sullivan into bigger roles Friday, and it’s a reward to the guys who take their lumps day-to-day practicing against the first team.

“They’re coming along in the program, we have a lot of seniors who are going to leave at the end of the year and you don’t want to drop off the face of the Earth,” Stover said. “We want to be able to plug in and play, which we’ve been able to do a little bit the last two weeks.”

UD’s reserves played against CR North’s starters, who stayed in the game until late in the fourth quarter with the running clock speeding up the second half. Papp finished with 118 yards on the ground after being held to 24 yards on 10 first half carries.