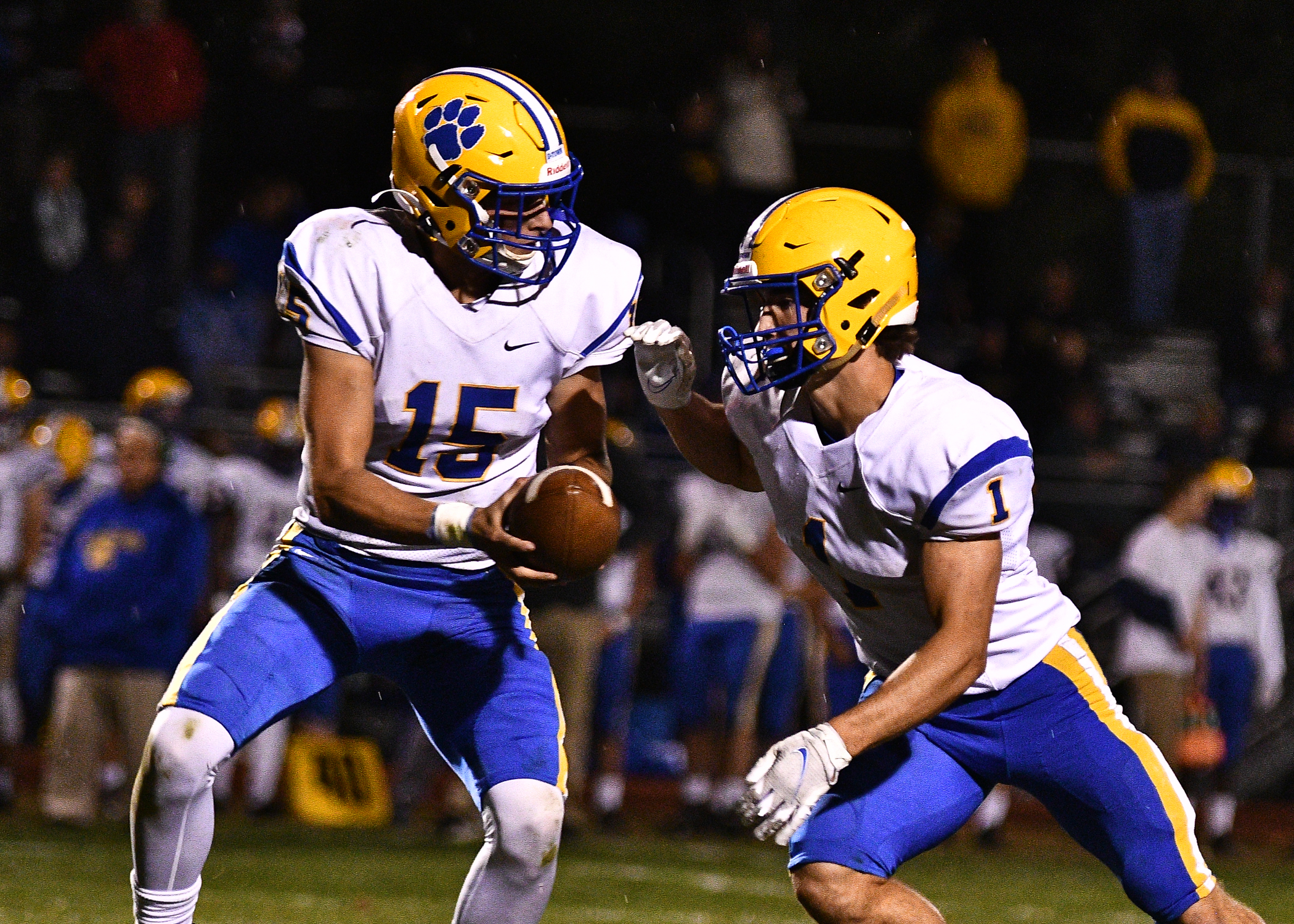 OXFORD >> Cougars’ workhorse Bo Horvath racked up four touchdowns and reached a personal career milestone Friday night as Downingtown East survived a scare from a game Oxford squad. The Cougars (5-1 overall, 1-0 league) broke open a tight game late in the third to top the Hornets (2-4, 1-0) 42-28 Friday night at Oxford.
“Oxford played hard,” said East coach Mike Matta. “We couldn’t get traction early. Give them credit for a good game plan, but we got it going in the second half and did what we had to do.”
Horvath, a Lehigh commit for lacrosse, had yet another big night for the Cougars, rushing for 226 yards on 33 carries, with a long of 44 yards. Horvath also found the end zone four times on the night. “Bo is a good player, very talented and works so hard,” said Matta. “We have four juniors on the offensive line, and they are starting to get it going. When our quarterback (Jameson Jenkins) gets the passing game working, it just opens it up even more for Bo.”
Horvath’s first touchdown of the night, a 15-yard scamper that put the Cougars up 7-6, also put him over the 3,000 yard mark for his career.
“It’s something you always wanted to accomplish,” said Horvath. “It’s a big accomplishment. But my bigger goal is to get 2,000 for the season.”
Coming into the game, Horvath needed just 16 yards to reach the 1,000 mark for the season, so his total now sits at 1,210 for 2022.
Horvath wasn’t the Cougars only weapon on the ground, as Downingtown East rolled up 327 yard of rushing on the night. Michael Waite chipped in with 31 yards on six carries, while Owen Lammey notched 48 yards on eight carries.
“We have three good backs who can all run the football,” said Matta. “That tells you the job the O-line is doing.”
It was the Hornets that struck first, getting on the board late in the first period when Justin Tyre hauled in a 29-yard touchdown pass from Dustin Long. After East answered back with Horvath’s run, Waite made it 14-6 with a two-yard TD run. But the momentum shifted right back to the Hornets when Long broke loose on a 16-yard run to the end zone. Long had a fantastic night, despite the loss. The Hornet senior, crowned Oxford’s Homecoming King at halftime, finished the night completing 15 of 31 passes for 350 yards and a pair of touchdowns. Long also ran for 110 yards on 14 carries and another pair of TDs.
“I couldn’t be any more proud of my kids,” said Oxford coach Mike Means. “We gave them everything they could handle and gave ourselves chances to win. We thought the one place we might be able to hurt them was vertically downfield, and Dustin just played a phenomenal game.”
After the Oxford defense came up big to open the second half, forcing a Cougars’ three-and-out, the East defense came up with a big play of its own. With Oxford facing a third and long, Jimmy Stott got to Long in the backfield, and punched the ball loose. Lammey fell on it in the end zone to put East up 21-14.
Once again, though, the Hornets had an answer, going 91 yards on just three plays, highlighted by a 67-yard completion to Corey Dantonio, and capped by a 29-yard run from Long.
But after that, the Cougars took charge, getting three more rushing touchdowns from Horvath.