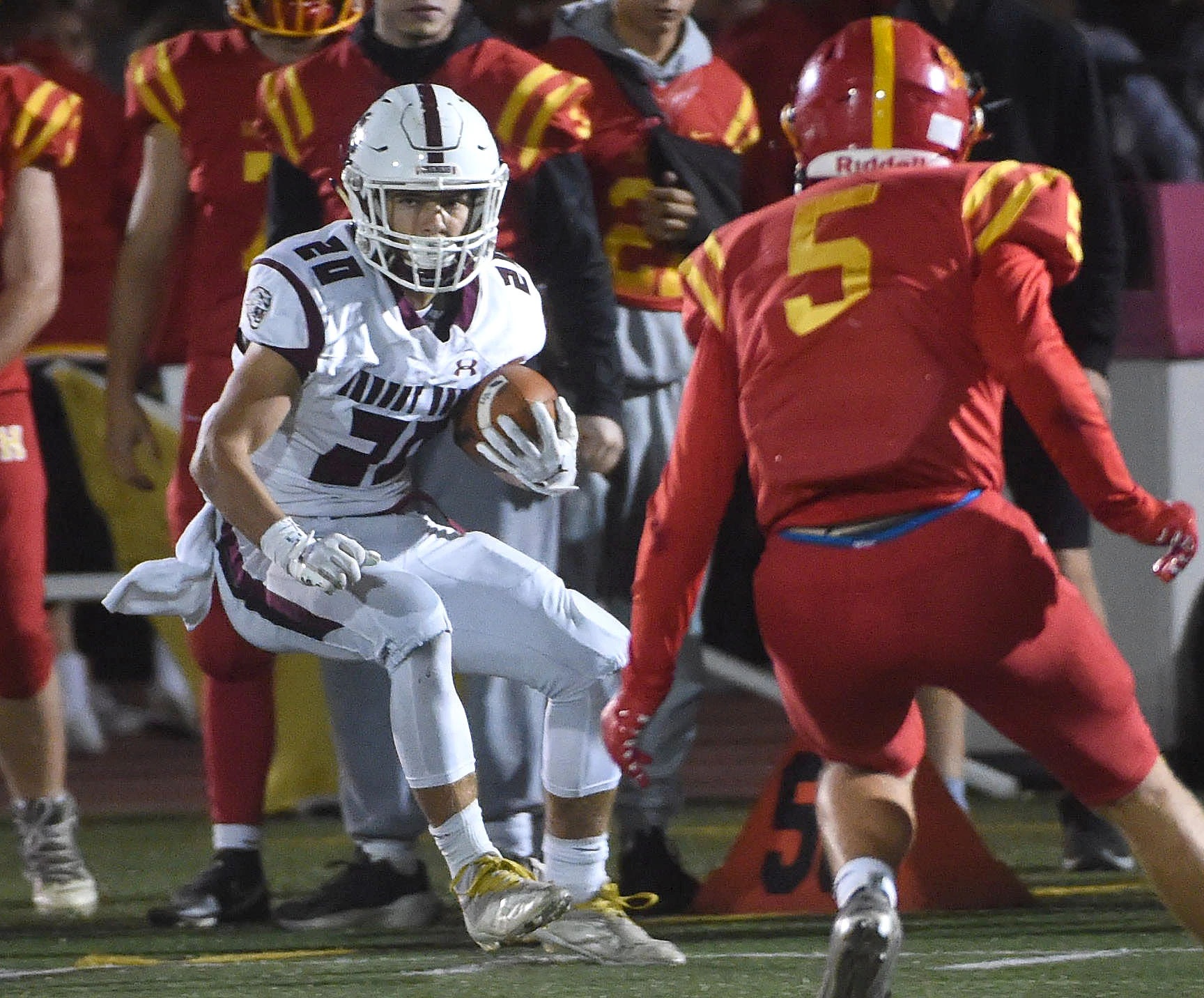 HAVERFORD — The remnants of Hurricane Ian didn’t hit A.G. Cornog Field until the second half of the Central League football game Friday between Garnet Valley and Haverford.

By the end of the evening, Fords fans who watched their team grab AN early lead only to lose for the sixth straight time in the series were left wondering which hurt more – the Jaguars’ lethal passing game or the unpopular decision to cancel the annual Havertown Township Day scheduled for Saturday because of the impending rain?

The Jaguars, at any rate, made Friday a night to remember with a 25-7 victory thanks to the accuracy of quarterback Matt Mesaros, who threw two touchdown passes, and their gritty defense. Haverford’s Ethan Mahan hauls in a touchdown catch in the first half Friday against Garnet Valley. (PETE BANNAN-DAILY TIMES)

The triumph kept the Jaguars (6-0, 5-0) undefeated and extended their Central League win streak to 39 games. The Fords (2-4, 2-3) certainly got the attention of Jaguars coach Eric Van Wyk.

“I was really impressed,” Van Wyk said. “They punched us in the mouth. They really brought it, and it took us a while to respond.”

After a grueling first quarter, Tommy Wright threw a 29-yard TD pass to Ethan Mahan to stake the Fords to the lead less than two minutes into the second frame. That score was set up by an early north-south ground game featuring running back Zeke Bates and Wright.

“When you play a team like that, you can’t be cute with them,” Fords coach Luke Dougherty said. “You’ve got to be physical. And I thought we were physical all game. We just made a couple mental mistakes that killed us in the second half, and they rallied in the third quarter. Our kids fought really hard tonight and I’m proud of them for that. They knew the game plan and they stuck to it, sans a couple mistakes.”

After the Fords opened the scoring, the Jaguars rebounded with a long march capped by Luke Mingioni’s one-yard run. When the Fords were called for offside on the point after, Van Wyk sent the offense on the field in search of two points. The run failed, and the Fords led 7-6.

“I’ve got to give them a better play call,” Van Wyk said. “But at the same time, we believe in the offense and our ability to move the ball. It took us a while to get going but we finally did. The past two weeks we haven’t come out with that energy that we harp about. And there’s something about second halves that we’re figuring out. But we need to make it a four-quarter game to do what we really want to do this year.”

With less than a minute left in the first half, Mesaros threaded a 30-yard scoring pass to Drew Van Horn, who does the kicking now. The conversion was good. Though the Fords threatened to answer with a TD before the intermission, Tyler Lassik intercepted Wright and the Jaguars led, 13-7, at the break.

Garnet Valley added to its lead on a nine-yard TD run by Joseph Checchio with 7:29 left in the third, the rain picking up and the seats emptying out.

Mesaros found Jack Westburg with a nine-yard scoring pass with 4:56 remaining to ice it. Mesaros completed all five of his pass attempts for 100 yards.

“I’ve got to give a lot of credit to Coach (Rich) Boyd,” Mesaros said of his offensive coordinator. “We spend so much time, so many hours practicing those plays and we pull them out in situations when we need them. I trust the receivers. They work so hard. The offensive line, they did a great job. They gave me so much time I can’t miss an open receiver.

“They all did their jobs. Everyone. That made it easy. One thing about all of us, every guy here is we just fight back. We weren’t satisfied with our first half. We knew we could do so much better. We wanted to go out and prove it to everyone.”

In addition to Mesaros, Lassik completed a seven-yard pass after coming in as the backup, and Checchio threw a 27-yarder to Mingioni after taking a pitch from the quarterback.

“Great calls by Rich, and Matt, he’s just a class act,” Van Wyk said. “He works hard Monday through Thursday and it pays off on Fridays. He’s just a character kid and we put a lot of trust in him. Two touchdown passes tonight? It doesn’t happen often for us. Especially in a rain game.”