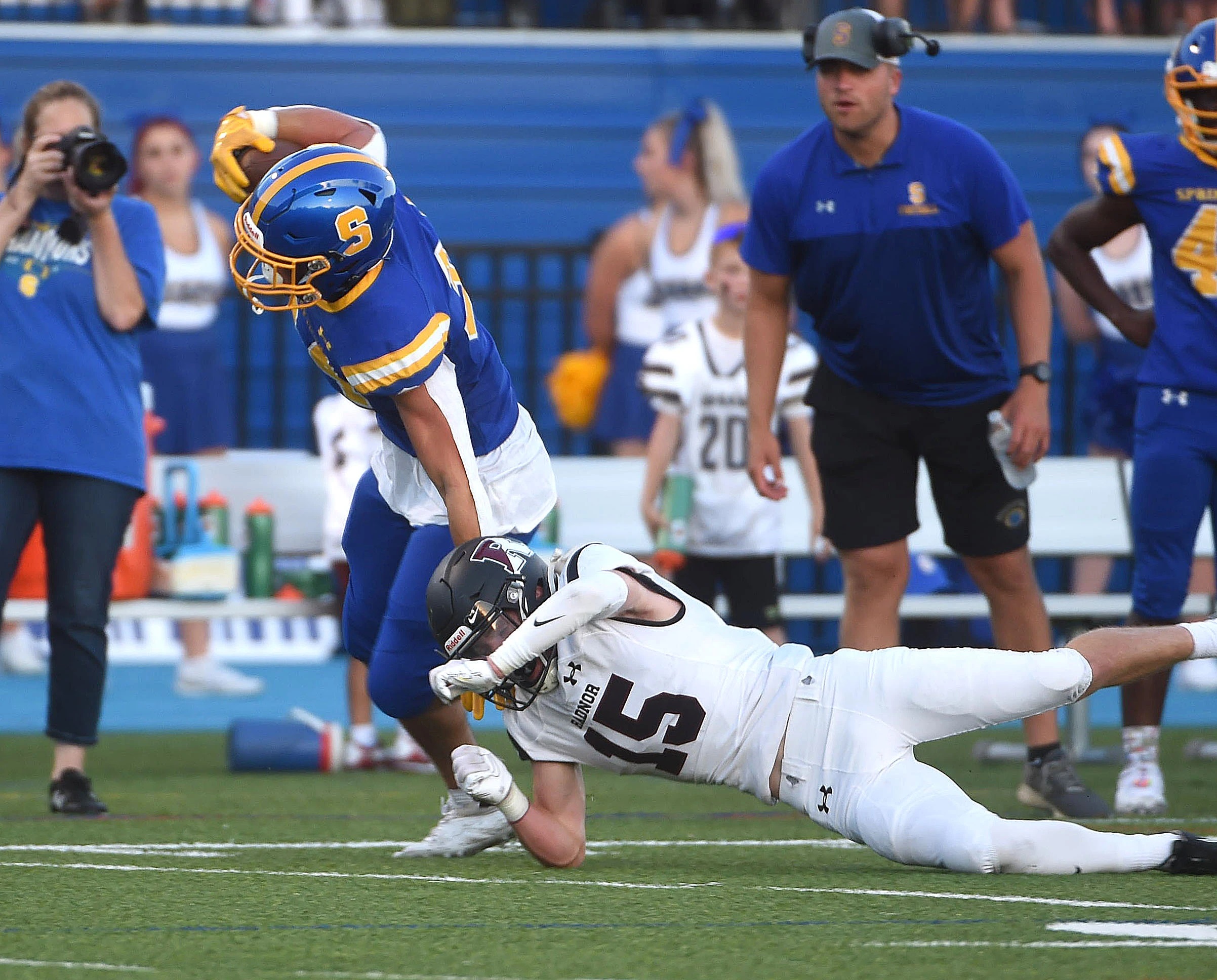 Springfield's Nate Romano picks up a first down in a game against Radnor this season. (PETE BANNAN-DAILY TIMES)

SPRINGFIELD — In the turning-point quarter of a turning-point game Friday night, Springfield football coach Chris Britton knew where he had to turn.

It was to his freshman.

“And if you watched him practice every day,” he said, “you’d know why.”

Relying on a strong running attack to snap a three-game losing streak, Britton did not call a fourth-quarter pass play and relied heavily on rugged freshman runner Brad Barber as the Cougars outlasted Marple Newtown, 35-32, possibly salvaging a season.

Barber rushed 10 timed for 108 yards, including a 23-yard touchdown, mixing in bursts of 38, 14 and nine yards. All five Springfield scores came on the ground, including blasts of 2, 4 and 1 yard from Nate Romano.

“Once we started going, the line started pushing, and we just went from there,” Barber said. “The line made the holes and I just did what I did.”

Behind pushy offensive linemen Tyler Klambara, Gus Bryan, Ryan Benjamin and Dean Brown, among others, the Cougars established the run early and used it to preserve the lead late.

Springfield, which scored on its first four drives, opened the game with a 10-play, 68-yard march punctuated with a one-yard touchdown plunge from quarterback Jake Rama. Before halftime, Romano would run for three touchdowns to help the Cougars take a 28-20 lead.

While Springfield (3-3, 2-3 Central) frolicked on the ground, Marple Newtown had aerial success, with Dave Bertoline passing for 167 yards, including 94 in the first half.

Answering Springfield’s opening drive, Bertoline capped an efficient eight-play drive with a four-yard scoring run. With neither team punting until late in the first half, Paul DeFruscio rushed 28 yards for a touchdown and Brian Box added an eight-yard scoring run before the half for Marple Newtown.

The Tigers, attempting to recover from their only loss of the season a week earlier at Conestoga, drew within 28-26 on Lou Diluzio’s two-yard scoring run with 5:40 left in the third quarter. But when Springfield chose to protect the lead with its running game, Barber was money, churning for a 23-yard touchdown with 6:30 to play.

“It was fun,” Barber said. “And this was a huge win. Huge. Huge. We were coming off three straight losses. We’ve been fighting in practice, five days a week, going real hard. It feels great to finally get paid.”

Marple Newtown (4-2, 3-2) would not make that simple, however, pushing deep into Springfield territory with 1:44 to play and drawing within 35-32 on a 13-yard scoring pass from Bertolini to Joey Yukenavitch. Earlier, Bertoline and Yukenavitch connected on a two-point conversion pass, but it was Springfield kicker Sean Williams who made the point-after-touchdown difference Friday, going 5-for-5 on conversion kicks.

The Tigers tried an on-side kick, but Springfield’s Mike O’Donnell pounced on it. Marple Newtown did manage to gain one more possession, but was too deep in its territory with seconds to play.

“Springfield is a really good team,” Tigers coach Chris Gicking said. “They were coming off three straight losses, so they were really hungry. For us, it was similar to last week. You play a good team like Springfield, you can’t make mistakes.

“The kids are upset by the loss, and the coaches are upset, as we should be. We have to get better for next week against Upper Darby because it is not going to get any easier.”

“We have played pretty good teams,” Britton said. “But we’re young and we are pulling together. This is a resilient group and I thought the kids really responded tonight.”