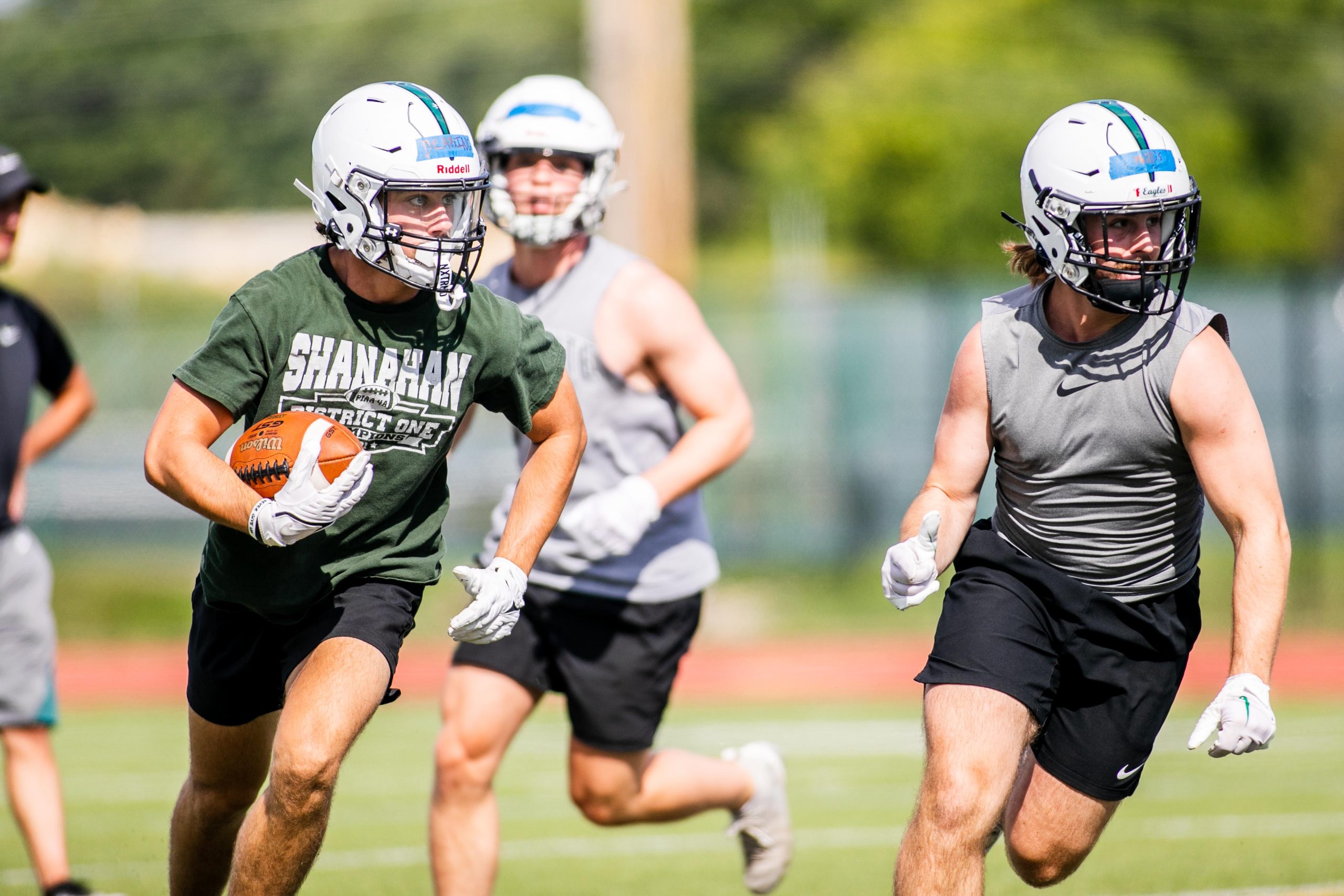 EAST WHITELAND >> The Bishop Shanahan football team strolled into Valley Stadium on Friday night and used a superlative defensive effort to knock Great Valley from the unbeaten ranks with a 6-3 nonleague victory.

The Shanahan defense limited the Patriots to just 59 yards rushing, seven first downs and 150 total yards for the game.

“We had a great game plan from our defensive coordinator and the kids really executed it well,” said Shanahan head coach Paul Meyers said. “The kids really believed they were going to win this game and they came out and were physical for the entire four periods. It was the most physical we have been all season. I’m really happy with the kids’ effort and I am happy for them.”

Bishop Shanahan (3-2 overall) got on the scoreboard with the game’s only touchdown midway through the second quarter when Trevor Barbadora juked out some Great Valley defenders and rambled 32 yards off the right side. The extra point attempt was no good and the Eagles held a slim 6-0 lead.
Great Valley (5-1) could not sustain any sort of a running game for the game.

They did drive into Shanahan territory on their next possession, which was helped by a roughing-the-passer penalty. The drive stalled and Great Valley called on kicker Seth Turner to get some points on the board. Turner drilled a 30-yard field goal to cut the deficit to 6-3. Turner had a field goal attempt blocked in the first quarter.

It looked like the Eagles would take a larger lead early in the third when QB Zack Ferraro hit Aidan Civiteela with a perfect 29-yard pass that went down to the Patriots’ one-yard line. Civitella looked like he was in the end zone, but was marked down at the one.

But, the GV defense stiffened, helped by an illegal motion penalty on the Eagles, and held Shanahan out of the end zone and they took over on downs at the seven.

“It was tough when the offense did not get in as and we know funny things happen on the goal line,” Shanahan defensive lineman Luke Lorenz said. “But we just went back on the field and did our job. Our coaches had us in great position all night and we really played fired up football because they are a 5A team and they were undefeated. We really had a lot of energy tonight.”

No one on the defense had more energy than Lorenz, a senior, as he clogged the middle all night and consistently was involved on almost every Great Valley running play.

The Patriots had one last chance late in the fourth as they held the Eagles’ offense and forced a punt. Great Valley took over the football at the Shanahan 49 with 3:14 to play in the game. Once again, the Eagles defense came to play. On a 4th-and-8 play, they broke up a Braden Melia pass attempt and the Eagles took over the ball just shy of midfield with a little over two minutes to go.

Melia was only eight-for-23 on the night, but he did not get a lot of help from his receivers, who dropped at least five passes on the night.

The Eagles then used Barbadora to run out the clock as the junior rambled 18 yards down to the Patriots’ 20. The offense stalled and they gave Great Valley the ball back at its own 10 with 17 seconds left. Melia tried tried two passes, both fell incomplete and the Eagles had a very big road win which really helped their 4A playoff chances

“Trevor Barbadora had a big game for us,” Meyers said. “We call him “Little Peanut” and he broke off that big run to score. And Luke Lorenz is our leader and captain on defense. He was very good tonight.”

The bitter loss was tough to swallow for the Patriots and head coach Jeff Martin talked about missed chances for his squad.