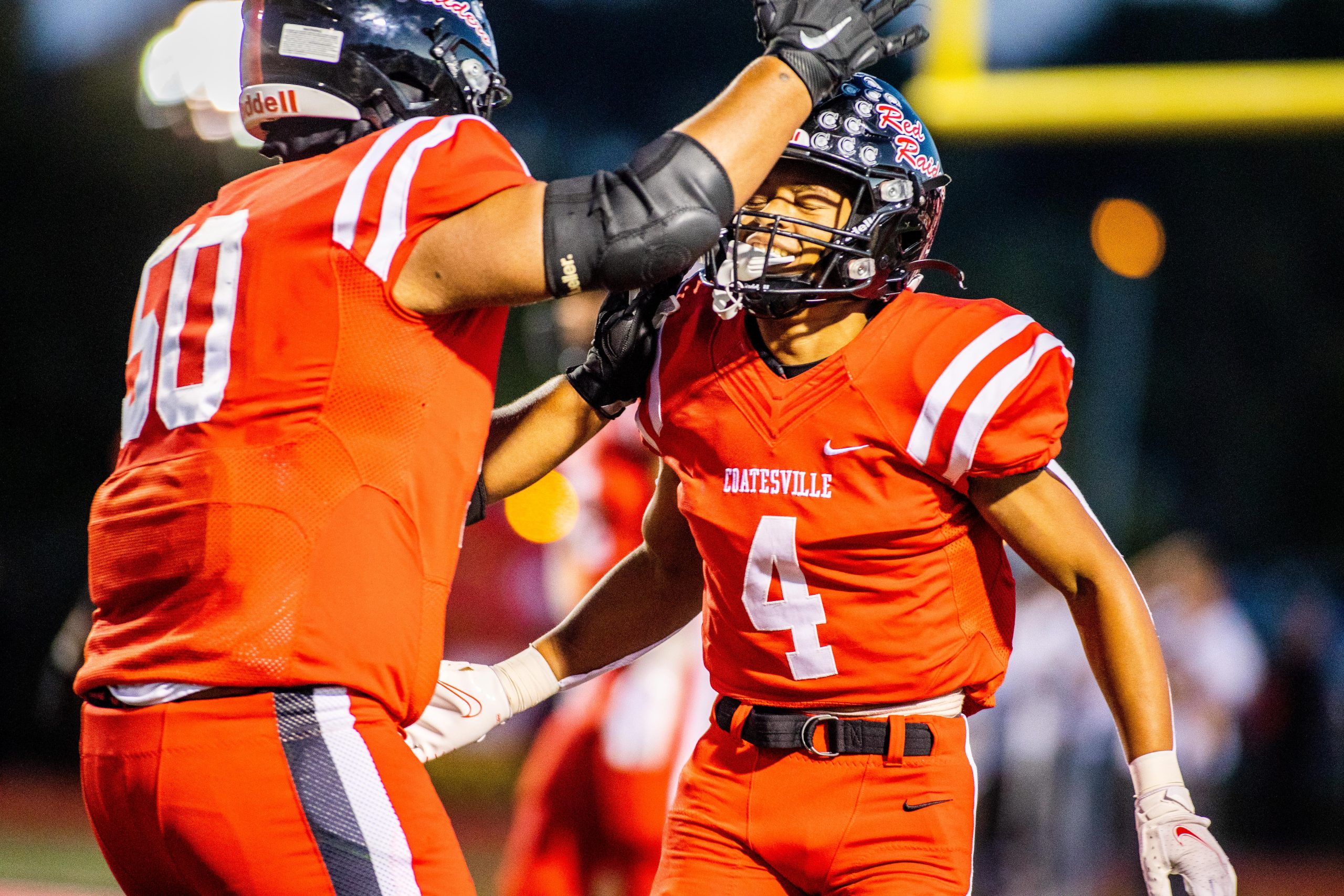 We are heading into Week Six of the scholastic football season and with area teams starting the second half of the regular season, playoff and league races are heating up as every game has very significant meaning. Here is a look at all the Week Six action:

Bishop Shanahan (2-2) at Great Valley (5-0), 7 p.m.
Great Valley is one of five District 1 5A teams that are undefeated. The Patriots won an overtime thriller over Academy Park, 28-25 last week.

Seth Turner nailed a 22-yard field goal, one of his two on the evening, to win it for the Patriots. Great Valley quarterback Braden Melia came alive in the second half as the Patriots outscored the Knights 22-12. Great Valley did give up 282 yards on the ground to the Knights and Bishop Shanahan will look to run the football effectively enough to pull the upset here.

Coatesville (5-0) at WC Rustin (3-1), 7 p.m.
This is a tough stretch for a Rustin team that is being plagued by injuries right now. Coatesville has used its big play offense to blitz teams so far this season as the 5-0 Red Raiders are averaging over 38 points per game this season.

They ran for 400 yards in a 54-7 win over Unionville last week and should be able to move the ball here.

Look for the Red Raiders running back Damon Watson to have a big game here.

The Golden Knights downed Chichester, 28-7, last week and senior running back Daimon Jacobs went over the 100-yard rushing mark. Sophomore Chase Hatton missed the Chichester game with an injury and is questionable again.

The offensive line led the way as Downingtown East piled up 536 yards of total offense. Bo Horvath, who rushed for 242 yards last week, leads the area with 984 yards.

Oxford gave up 50 points to Interboro last week in loss with the Bucs rushing for 401 yards. It is hard to see the host Hornets being able to stop the Cougars rushing game here. The East defense is led by Owen Lammy and the unit has allowed just 14 points in its last two games.

WC East (0-5) at Downingtown West (4-1), 7 p.m.
Downingtown West is averaging 41 points per game this season to lead all area teams, and the West Chester East defense is coming off a game it gave up 442 total yards against Chester in a 41-0 loss.

The Vikings have not been able to get any offense going so far this season, while the Whippets’ defense is one of the best units in the area. Running back Mitch Ragni, one of the best rushers in the district, will likely get the ball a lot for West Chester East. They have not scored a point in its last two games.

Downingtown West quarterback Quinn Henicle is very accurate and he has a huge offensive line in front of him led by Cooper Young and Ryan Howard.

The Whippets have multiple playmakers and should be able to take advantage of their size advantage up front and move the ball at will.

Kennett (4-1) at Interboro (3-2), 7 p.m.
Kennett faces a stern road test in this matchup with the Bucs. Interboro has a very strong rushing attack and the Blue Demons gave up 317 yards on the ground in a 41-7 loss to Downingtown East.

Interboro is not as strong as the Cougars and running back Julian Sparacino should get untracked. Sparacino found running tough last week against the Cougars, rushing for just 45 yards.

Interboro is traditionally very tough at home, but Kennett has shown they are a quality 5A squad. Sparacino and impressive sophomore Ian Guyer should be able to make enough plays to get the Blue Demons a road win. Should be a physical battle between two good front sevens.

Chichester (1-4) at Unionville (2-3), 7 p.m.
Unionville needs a win to stay in the District 1 5A playoff race. The Longhorns are coming off a 54-7 loss to Coatesville in a game they were blitzed for 28 points in the first quarter. Chichester has had trouble scoring points and does not resemble Coatesville in any aspect of the game.

Conestoga (4-1) at Upper Darby (2-3), 7 p.m.
Conestoga has turned into the Cardiac Kids as they have won three games by one point, including last week’s 28-27 victory over Marple Newtown.

Quarterback Peter Costigan had three touchdowns on the ground. Conestoga just has too much firepower to be stopped by the Royals. Conestoga ran for 308 yards in the win over the Tigers and should approach that mark again.

WC Henderson (0-4) at Chester (5-0), 11 a.m.
Chester is one of the best teams in the 5A bracket. The defense has pitched four shutouts in their five wins. While the Clippers’ defense is good, it may not be as impressive as freshman quarterback Jalen Harris, who has thrown 20 touchdown passes so far and can also hurt you with his legs.

The Warriors have only scored 15 points this season and are having a hard time getting anything going on offense. They will have to score points to stay in this one against the talented and elusive Harris and friends.

Avon Grove won its second game of the season last week by downing Sun Valley, 35-28, in double overtime. Academy Park is not having one of its very good recent seasons, but senior tailback Terrance Oliver is a handful as his 297-yard rushing performance against Great Valley showed.

The Knights lost to Great Valley, 28-25 in double overtime, and they should be in store for another close one.