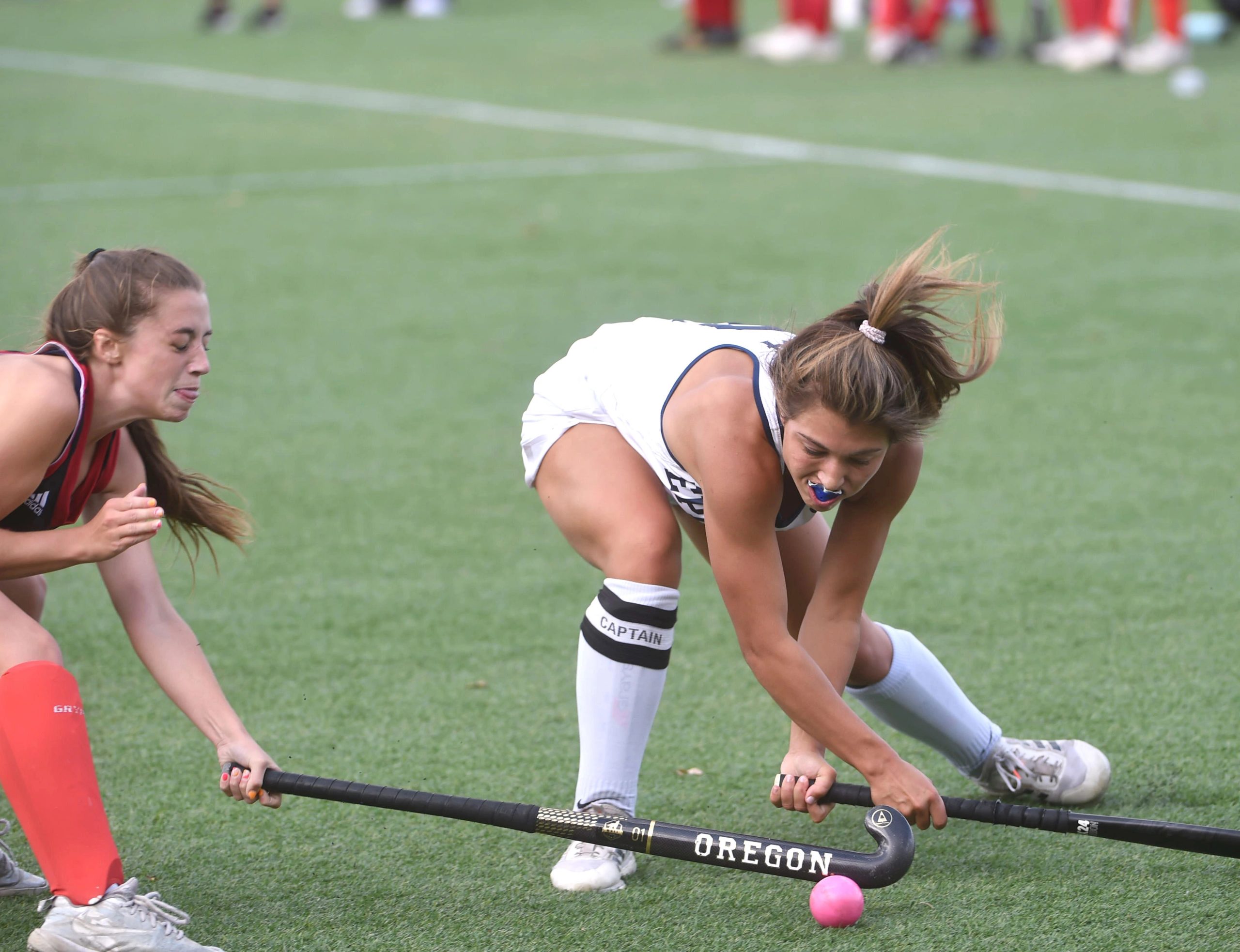 NEWTOWN SQUARE — Change isn’t something that Episcopal Academy’s field hockey program has experienced much over the last few decades. Not over 34 seasons, 13 Inter-Ac championships and nearly 500 wins under the steady hand of Gina Buggy, whose name now graces their playing field.

But seniors on the Churchwomen’s squad this fall can say something that none of their forebears since the 1980s could – they’ve been around the program longer than their coach. And after the program’s history resided for so long in the stewardship of one person, it’s now the seniors that have an active role in transmitting the legacy of one of the area’s most storied programs.

“We keep all the same traditions we had as freshmen,” said Lex Ventresca, one of the seniors who scored in a 3-1 nonleague win over Archbishop Carroll Tuesday. “It’s kind of weird now that we’re the seniors and applying them with everyone else. It’s different with three coaches, but we try to keep the traditions for all the younger girls because our freshman experience was the best, so we want everyone else to have that.” The winning ways continue to trickle down the generations for EA (7-1-2), despite the perennial losses of talent to the top college programs in the country. So, exit four senior All-Delcos from last fall, and enter a new crop of players, occupying larger roles and broader responsibilities. That’s remained true even as the coaching staff has changed, with Stefanie Fee, the former U.S. national team member named Buggy’s successor in Dec. 2019, stepping down after two successful seasons.

Into that role stepped Paul Zelenak, formerly a head coach at Padua Academy in Delaware and a boys lacrosse coach at Roman Catholic. A club field hockey player in his youth, he played college lacrosse at Drexel while serving as a scout team practice player for the Dragons.

The lacrosse/field hockey duality appeals to Ventresca, a Northwestern lacrosse commit. Zelenak’s larger emphasis on skill-building and team hockey seems to be resonating with the Churchwomen.

“It’s not just generic, like we split up on offense and defense,” Ventresca said. “We’re constantly working on new corners and stuff like that to get better. And he really wants to win, which I like.”

Tuesday’s collision of traditional powers in the Inter-Ac and Catholic League showed some of Zelenak’s approach. EA is built around a sublime individual talent in Charly Bruder, an All-Delco and University of North Carolina commit, where she’ll again be a teammate of last year’s Daily Times Player of the Year Ashley Sessa. Bruder scored in the third quarter and is the team’s principal attacking threat, particularly in receiving corner feeds and directing traffic.

But much of Zelenak’s approach, emphasizing building offensive attacks by stringing together passes up the field and creating space from sideline to sideline, seeks a team approach where they don’t need to rely on Bruder’s individual brilliance.

The opening goal, finished by Ventresca and assisted by Rebecca Block from the run of play, is an example of possession opening up fissures in the defense to exploit.

That’s not to deny the influence of Bruder. Her shot off a corner in the second quarter was saved by Carroll’s Arianna Hall for Paige McMeekin to collect the rebound and punch it home. She was the focal point of so many other attacks, able to weave through two and three defenders with ease.

“I love playing with Charly because I have a lot of trust in her,” Ventresca said. “We’ve been playing together the past four years. We started as the backs freshman year, and now we’re both mids. It’s awesome because you have someone that you know is going to receive the ball and keep it so you can keep your momentum and keep on running. She’s so fun to watch and to learn from.”

“She’s a really talented player,” Carroll midfielder Courtland Schumacher said of Bruder. “It’s hard because she has such a strong skillset, she has so many different things that she can do. So you just have to prepare every way you can and just keep her in front of you the whole time.”

Carroll (7-4) did that well for most of the game. The Patriots are no stranger to change, either, trying to layer together successive prosperous seasons since the 2020 run to the PIAA Class 2A final. Schumacher was a sophomore contributor on that team, and so many of the other Patriots have used that postseason experience to set expectations.

Schumacher admits the latest version remains a work in progress. The Patriots came up empty on their first seven corners Tuesday, though they forced a pair of impressive kick saves from Isabel Andrews in the second quarter. By the time they broke through, a tic-tac-toe corner play from Schumacher back to corner feeder Cate McConaghy to Sienna Golden to tuck home a goal, it was too late to mount a comeback.

“We’re still trying to get everyone used to playing together, but I feel like we’re doing a great job,” Schumacher said. “… We have a lot of young players but we’re developing into a very strong team this year. We’ll get there.”

Interboro 1, Chichester 0 >> Felicia Pescatore tucked home a rebound in the third quarter for the only goal as the Bucs prevailed.