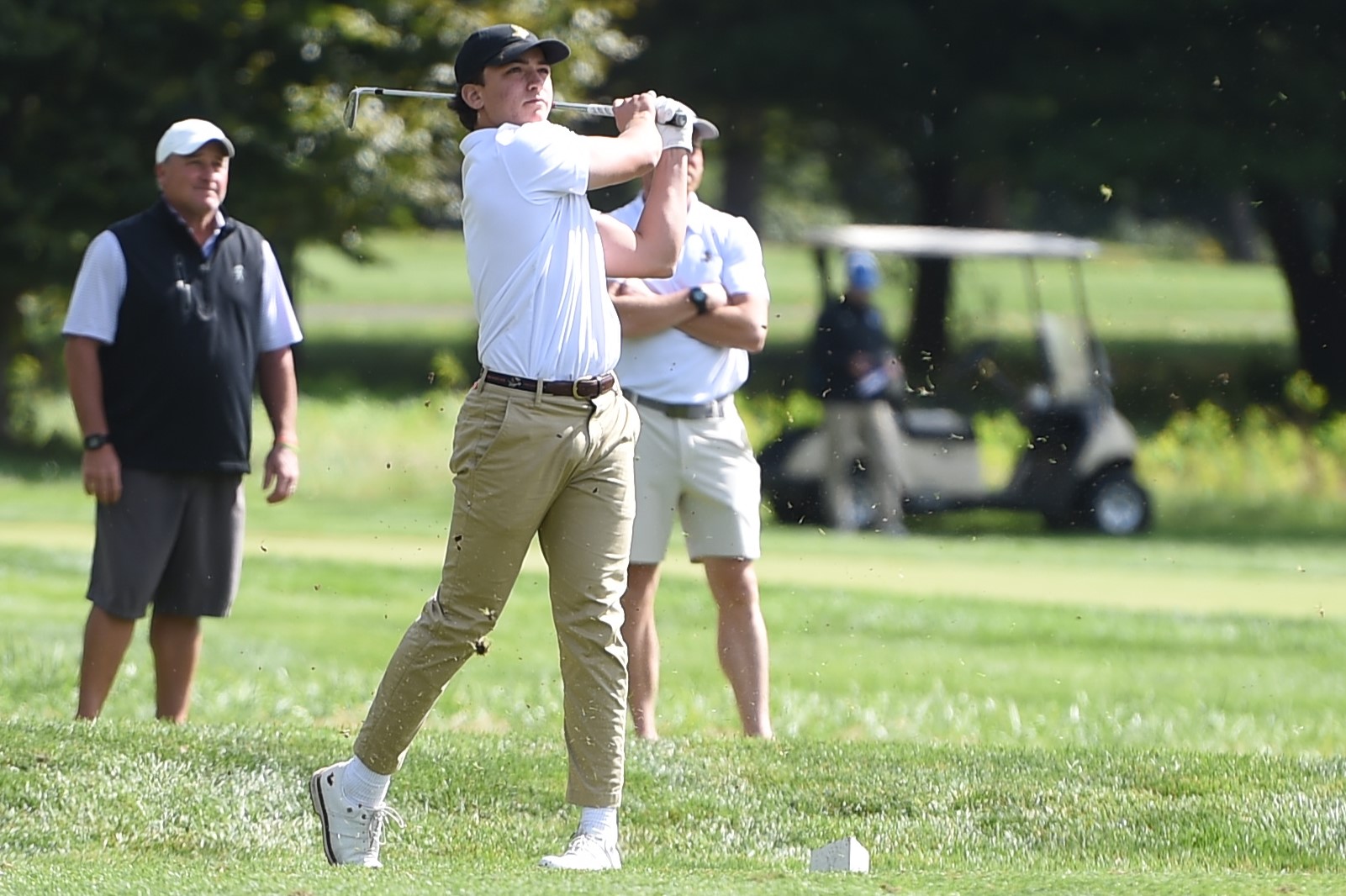 WARMINSTER >> Chase Feraco tried his best to ignore the scoreboard at the Suburban One League Boys Golf Tournament Wednesday.

“I really didn’t know until the back nine, probably about on 11 was when my dad’s like ‘You got a two-stroke lead,’” he said. “I’m like ‘I didn’t really need to know that.’”

Not that the knowledge ended up shaking the Central Bucks West senior’s steady play at Five Points Golf Club.

“As we kept going, he kept telling me,” Feraco said. “I think it got up to four strokes by 15 or 16 and then just trying to keep it in play after that.”

Feraco was the lone competitor to shoot under par during the round, carding a 1-under 70 to earn first place by three strokes. “Lot of tight holes out here so driver, tee shots are very important here,” Feraco said. “And setting up down the right side knowing it’s going to come back with confidence – felt very good today.”

Feraco was one of three Bucks to qualify for the District 1 Championships with 39 SOL golfers making the Class 3A field for the two-day tournament beginning Monday, Oct. 10 at Turtle Creek Golf Course.

“I’m just looking to take what I got from here today and bring it there,” Feraco said. “Keep it flowing.”

Feraco, who tied for 10th at SOLs last season with a 5-over 76, claimed this year’s title with a strong back nine, recording a pair of birdies to go with seven pars.

“I’ve gained a lot of distance, obviously that helps,” he said. “I think the big thing is confidence and knowing that I can hit different types of shots and not worrying about what the miss is going to be and just focusing on the best type of shot I can hit.” “The front, here and there – had two three-put bogeys, those are my two bogeys of the day,” Feraco said. “Got a birdie on the par five, got there in two and then once we got to the back it kind of all came together. Putting was good, started making some birdies.”

Souderton matched Bensalem, Central Bucks East and Pennsbury with the most district qualifiers at four – the Indians paced by Aidan Scott, who shook off a tough start to place second with a 2-over 73.

“Honestly, just confidence,” Scott said. “Just being confident in my shots, looking at, taking my time on all my putts. Getting the right reads, that’s pretty much what I did the whole match and it definitely paid off in the end.” Central Bucks South’s Noah Moelter and Nick Riscica of Council Rock North tied for third place at 3-over 74. Springfield-Montco’s Adam Fluehr took fifth with a 4-over 75.

CB East’s Will Dunsmore (5-over 76) and Hatboro-Horsham’s Brent Glah (6-over 77) placed sixth and seventh, respectively, while four golfers – Upper Dublin’s Al Eby, East’s John Hoderny, Springfield’s Max May and Logan Wrigley of North Penn – finished tied for eighth at 7-over 78.

“For me it was just taking the driver out of the bag cause honestly have not been too confident with that recently,” Scott said.” So I’m really confident with my three wood, I’ve been hitting that really pure, really straight and that’s what I’ve been doing. So I’m really happy to come back after those bad two holes and it was definitely a really fun round.” Joining Scott at districts for Souderton are Alec Kreiser (11-over 82), Jacob Dommel (12-over 83) and Charlie Arobone (13-over 84), who earn SOL’s last 3A spot by winning a three-golfer playoff with Hatboro-Horsham’s Ryan Park and Council Rock North’s Chase Gillie.

Arobone and Gillie remained tied after the first playoff hole and needed two more before Arobone secured qualification with a birdie on the par-five 12th. North Penn and Central Bucks South both had three golfers advance to play at Turtle Creek. Daniel Steinmetz and Mark Rodoff, who each carded a 12-over 83, join Wrigley for the Knights. Moelter, Brendan Reilly (9-over 80) and Kyle Watson (12-over-83) moved on for South.